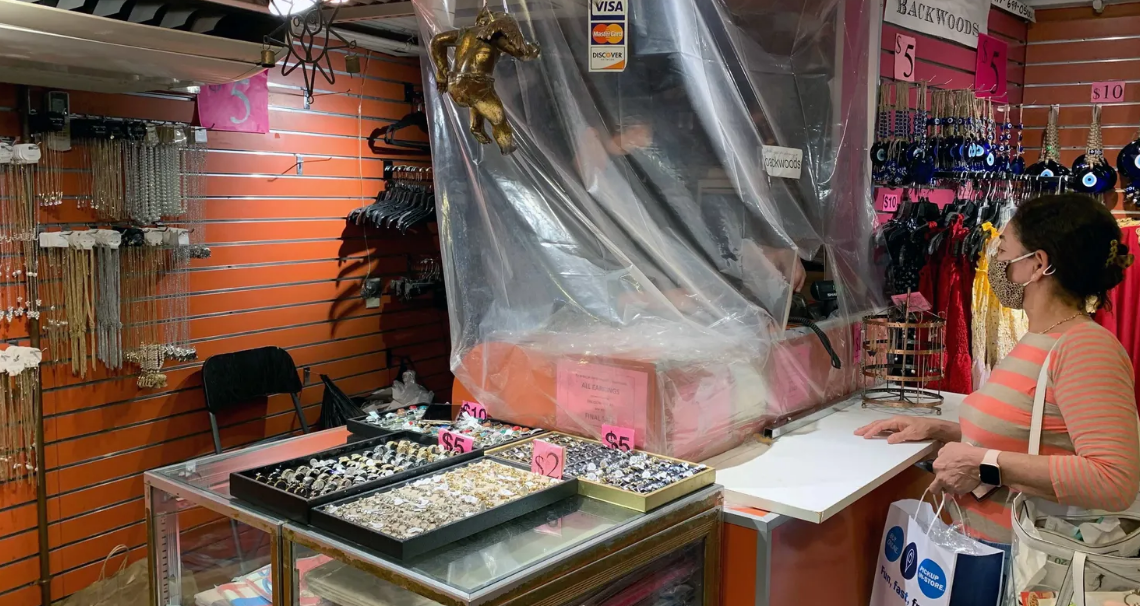 Station use has seen less of a falloff in Brooklyn, Queens and The Bronx, records indicate. One sign of the times: Many Manhattan underground retail outlets remain “like a ghost town.”

At the only open storefront inside the sprawling Jackson Heights-Roosevelt Avenue subway station in Queens, Darren Wernick has, in recent months, had to close the door to limit the number of patrons.

“It was getting too crowded,” said Wernick, the owner of Backwoods, a women’s clothing store with two locations in the subway system. “Now with the vaccines, I feel a little more confident leaving the door open.”

But at the Backwoods branch at the 42nd Street-Port Authority Bus Terminal station in Manhattan — part of the busiest subway complex in the city — the sting of the pandemic has been slower to subside, even as overall weekday ridership has rebounded to two million, or about 35% of pre-2020 levels.

The significant dropoff in Backwoods’ business between the busiest station in the system and one in Queens that was the 15th busiest in the city in 2019 and ninth busiest last year points to the ongoing struggles faced by subway shopkeepers in neighborhoods where ridership and office workers have been slower to return.

An analysis by THE CITY of MTA data shows subway stations in The Bronx, Queens and Brooklyn in April saw a smaller decline in turnstile entries and exits than Manhattan did compared to April 2019.

Manhattan recorded a 70% drop of turnstile entries or exits, in contrast with 48% in The Bronx, 55% in Queens and 56% in Brooklyn.

“We depend on the people that come to work in the skyscrapers here and they’re empty,” said Dominick Abruscato, 72, whose Royal Barber Shop is just outside the turnstiles at the Fulton Street stop on the 2/3 lines in Lower Manhattan. “But in the boroughs, people that come to the skyscrapers here, they’re home in Queens and Brooklyn, and they’re going to get haircuts in the neighborhood.”

At the stations that house Backwoods’ two locations in the subway system, turnstile traffic was down by 56% last month at the Jackson Heights-Roosevelt Avenue hub and 77% at 42nd Street-Port Authority Bus Terminal, compared to April 2019.

“In Manhattan, I don’t see any crowds,” said Wernick, whose subway stores closed in March and reopened June 22.

THE CITY reported in September that 35 of the 215 retail spaces in the subway — more than 16% of storefronts of varying sizes — had gone out of business since the start of the pandemic.

That figure does not include storefronts that are connected to subway stations where retail tenants pay rent to a landlord other than the MTA.

“As with retail more generally, the retail environment in the subway system has been changing rapidly,” Berman said. “Long before the pandemic began, we began exploring new business models underground and we will continue to do that moving forward.”

He noted the agency has granted “major rent deals” to tenants.

“I had to pay late a few months, they were fine,” Wernick said. “I really have to hand it to them.”

Abruscato’s four-chair barber shop in a corridor connected to the Fulton Street station, which he has owned for nearly 40 years, is reachable through a privately maintained entrance at 150 William St.

The William Street gateway to the station is among three privately maintained subway entrances in Lower Manhattan that were reopened by building owners after being closed for months during the pandemic.

“The pandemic, fuggedaboutit, it’s ruined the business completely,” he said. “We’re not even making minimum wage, me and my barbers. It’s been terrible.”

Abruscato said he still goes into his small barbershop each morning at 7 a.m. and stays until 5 p.m., even if customers have been, at times, non-existent.

“We’ve had days where we have had not one customer, and sometimes we’ll have two or three,” he said. “Four? That’s been a busy day.”

At the Clark Street station in Brooklyn Heights, Salahuddin Aziz said he’s still waiting for a rebound after 15 months of “no business” at his newsstand near the turnstiles.

“People in this area are wealthy, they go to their vacation homes, they go upstate,” he said. “A lot of people here, they’re working from home.”

Aziz, 67, said he had to take out a loan and rely on help from a family member to keep afloat the newsstand he’s run for more than 30 years.

He’s looking at more pain once the Clark Street station closes for several months so the MTA can replace its three elevators, comparing the looming repairs to a “double whammy.”

“I won’t be able to survive if they close the station,” Aziz said.