Please ensure Javascript is enabled for purposes of website accessibilityTed Cruz and John Cornyn opposed a debt-limit increase that will stave off economic catastrophe, but backed previous borrowing hikes – Capitol Hill Pulse Skip to the content 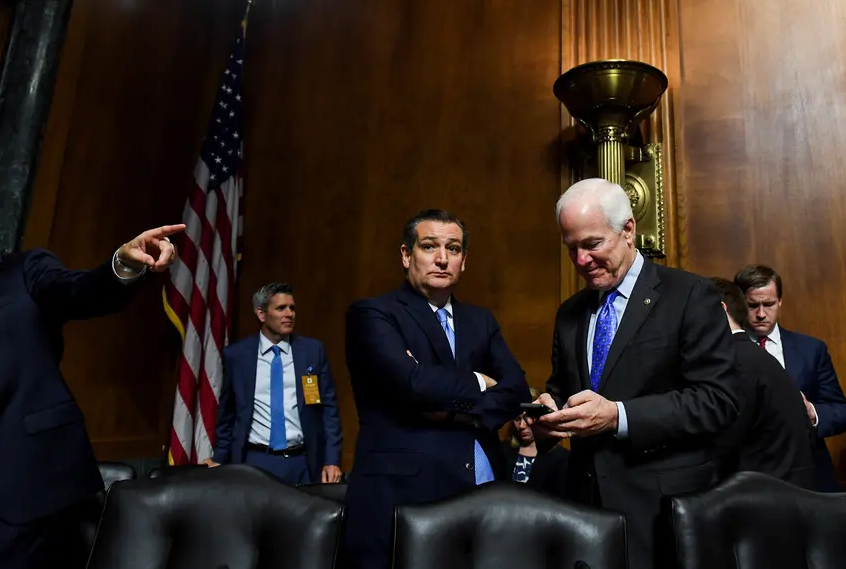 Ted Cruz and John Cornyn opposed a debt-limit increase that will stave off economic catastrophe, but backed previous borrowing hikes

U.S. Sen. Ted Cruz of Texas blasted his fellow Republicans this week for the role they played in allowing Democrats to temporarily increase the debt ceiling, keep the government from a first-ever financial default and avoid economic chaos.

“I wish Republicans hadn’t blinked,” Cruz said Thursday from the Senate floor just before the chamber voted to allow more borrowing until December. “We shouldn’t have done that.”

But his comments — and his party’s lockstep opposition to extending the borrowing cap in the face of widespread financial calamity — belie the role Republicans have played in contributing to the country’s $28 trillion deficit.

No Republican senator voted to raise the debt limit Thursday. But Cruz’s fellow Texan, Republican Sen. John Cornyn joined 10 other members of the party to allow that debt ceiling vote to come to the floor. That move staved off a potential worldwide economic collapse — and allowed Republicans to avoid being blamed for such a calamity without having to actually vote in favor of the increase.

And while they voted against Thursday’s increase, Cruz and Cornyn have routinely supported more government borrowing when Republicans held the White House.

Cruz routinely opposed increases throughout the Obama administration. As a freshman senator in 2014, he famously filibustered a debt-ceiling increase bill in exchange for deficit reductions. But a cloture vote ultimately allowed the bill to pass.

Yet both senators voted in favor of debt-ceiling increases throughout the Trump administration, including the 2017 tax cuts bill and the annual budget bill.

The debt ceiling functions like a credit card limit for the American government. Officeholders can — and regularly do — raise that limit in order to accommodate exploding deficits brought on by increased spending. That happened after the 9/11 terrorist attacks, the creation of new entitlements and the passage of tax cuts, and as the nation weathered expensive crises like the Great Recession and the COVID-19 pandemic.

Failing to raise the current debt limit could set off a stock market crash, and economists project apocalyptic worldwide fallout.

Usually, Americans rarely notice when Congress raises the debt ceiling, given how routine it has become over the years. But when it becomes a point of contention like this week, it can overpower all other politics of the day.

The newest debate came as Democrats are proposing trillions of dollars in new spending over the next decade. Even before the Senate voted, both the White House and U.S. House Speaker Nancy Pelosi announced they would move quickly to make a debt-ceiling increase law. The GOP aim was to make Democrats raise the debt limit on their own, even though the current deficit includes debts from GOP-approved policies and bills.

Cornyn opposed increasing the debt limit this week because it’s tied to a $3.5 trillion spending bill to fund Democratic priorities.

“Well I know it shocks everybody that politics is involved in anything that happens here in Washington D.C., but obviously the Democrats have an agenda that we don’t agree with, and why would we facilitate that agenda by raising the debt ceiling for example as long as we know they can do it by themselves, which they can,” Cornyn told Gray television news affiliates on Thursday.

Both parties have a history of politicizing such action. Democrats did it in 2006. Then, Democratic senators like future Presidents Barack Obama and Joe Biden voted against increasing the debt limit as a form of protest to the Bush-era Iraq War and tax cuts. Even so, the measure easily passed through the Republican-controlled chamber.

In 2011 and 2013-14, the Obama administration dealt with a series of debt-ceiling fights, later dubbed “the budget wars” when Republicans returned the favor after taking control of the U.S. House.

The government previously came so close to default that an analysis from Moody Analytics shows the 2011 and 2013 crises have cost the U.S. economy up to $180 billion and 1.2 million jobs. Following the crisis in 2011, the S&P stock index downgraded the U.S. in the exchange for the first time in history.

And while no Republicans supported the latest increase, Cornyn and some of his fellow Republicans directly helped get the bill through legislative hurdles required for the final vote to happen.

“In the game of chicken, Chuck Schumer won,” Cruz said of the Democratic Senate majority leader, adding that backing off was a “strategic mistake by our leadership.”

He went on to blame both parties for the explosion of debt, and included some of his own votes for spending to handle the COVID-19 pandemic. At the same time, he took care to excise the Republican-passed 2017 tax cuts from any culpability for the deficit, though such assertions contradict expert economic calculations.

Cruz told reporters Thursday that the 2017 tax cuts reduced what families, small businesses and farmers had to pay the government while helping to lower unemployment.

“And the very next year, federal tax revenues did not go down, they went up,” he said. “And so the tax cuts did precisely what they were designed to do, which is get people back to work and help job creators create jobs.”

But the nonpartisan Congressional Budget Office and the Brookings Institution think tank both issued reports in recent years stating otherwise, that the 2017 tax cuts reduced revenues, specifically among corporate taxes.

Initially, Republicans this week intended to force Democrats to use an obscure process called reconciliation to raise the debt ceiling without GOP support, but Democrats refused to have full ownership of the matter.

By Thursday, McConnell had backed off that hard line.

Instead, Republicans could have just avoided a filibuster — and the 60 votes needed to overcome one — and let the bill go to the floor and pass with only Democratic votes. The aim was still to avoid any Republican fingerprints on raising the debt ceiling, even as they backed off of the filibuster threats.

But on Thursday night, Cruz forced his Republican colleagues to go on the record over whether to allow a vote on the debt ceiling by calling for a recorded vote.

It was a move that brought a return to an old dynamic that had faded during the Trump presidency: McConnell, Cornyn and other leaders in the Senate backing a bill, only to have Cruz disrupt the plan by forcing Republicans to vote for something they may privately wish to pass but have no interest in publicly supporting.

In the world of congressional vote whipping, party leaders in both chambers often cast votes that may have private support among rank-and-file members but are unsavory in practice.

As for Cruz, he argued that Democratic efforts to spread responsibility for raising the debt ceiling likely worked.

“So why are we facing a crisis? If for 10 months, Democrats could have done this anytime they wanted, why didn’t they?” Cruz said on the Senate floor. “Well, because there are at least some Democrats who realize drowning the nation in debt and spending in taxes is not popular back home. The voters don’t like it.”

This article was originally posted on Ted Cruz and John Cornyn opposed a debt-limit increase that will stave off economic catastrophe, but backed previous borrowing hikes

Another company expands workforce in Dallas and Richardson