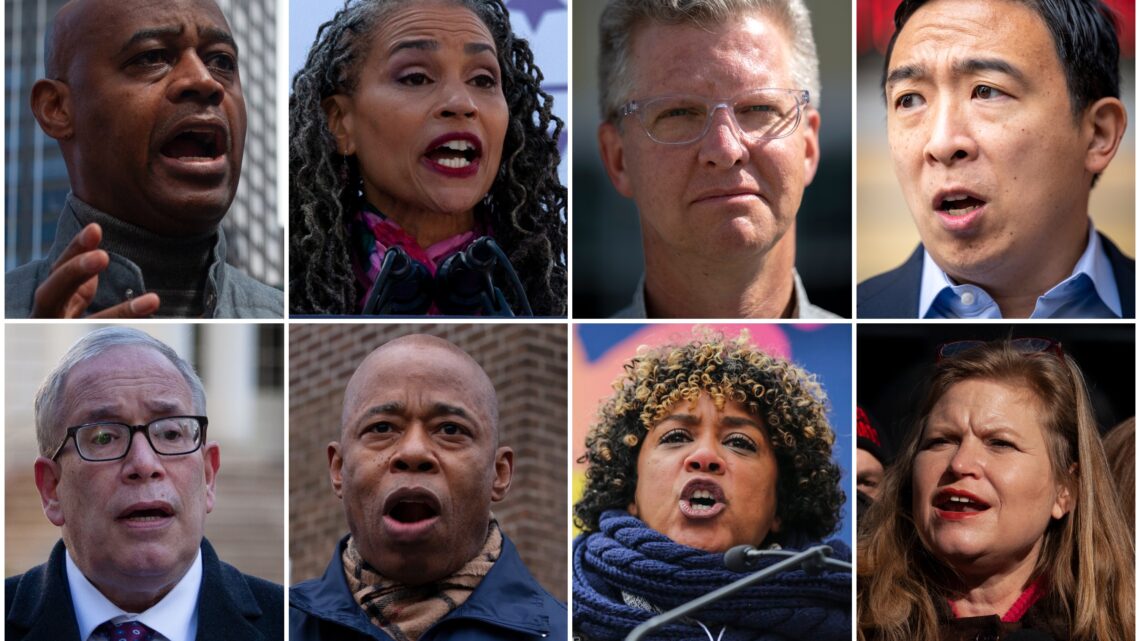 Just this week, Brooklyn businessperson Gil Cygler launched a PAC called Better NY for All to raise $500,000 to fund ads in support of Eric Adams’ campaign for mayor as well as a few other select candidates in the borough.

“A lot of small business people are being hurt by the leftward shift in the city and there has to be a better balance between the leftward shift, the need for reform, public safety and help for business,” said Cygler, who ran a rental car company for many years.

With less than three weeks to go before the mayoral primary and following a bruising in-person debate this week, business leaders have divided the Democratic candidates for mayor into those they believe embrace that business is part of the solution to the city’s recovery from the pandemic recession — and those who do not.

Crime has emerged as a crucial issue for business leaders, although keeping city tax bills level is not far behind. Confidence in the candidates’ ability to run the city is also emerging as an important differentiator.

“You need a mayor that understands that business and real estate cannot be the enemy,” Bill Rudin, CEO of one of the city’s most important real estate firms and a longtime civic leader told THE CITY.

“One that understands we are a progressive city but to do that you need to maintain the job creation that has driven the city for 25 years — in a sustainable and inclusive way,” added Rudin, who contributed $5,000 last month to an independent group backing Ray McGuire, state election board records show.

More than a dozen business leaders interviewed in recent days by THE CITY, both on the record and not for attribution, declined to name their top mayoral pick — though just about all made it clear who won’t get their vote.

Some said they still aren’t sure of their No. 1 choice and note the advent of ranked choice voting ads adds extra complexity to navigating the crucial June 22 primary.

A Tale of Two Lists

Most business leaders are reluctant to name the names on their scorecards, but Adams as well as former Sanitation Commissioner Kathryn Garcia, ex-HUD Secretary Shaun Donovan and Citigroup executive Ray McGuire generally fall into the acceptable column.

Entrepreneur and former presidential candidate Andrew Yang’s policies are regarded as pro-business, but what some see as his lack of knowledge of the city has raised concerns.

“Again with the goofy ‘Hello New York City’ opener (this is a mayoral debate, not “SNL”) and ending with a shout out for a Knicks win. Does he take this race seriously?” Kathryn Wylde, CEO of the big business group the Partnership for New York City, asked Wednesday night in a post-debate assessment for The New York Times.

Progressives Maya Wiley and Dianne Morales are anathema to many business leaders due to their rhetoric about shifting funds from the NYPD and their support for raising taxes on the wealthy. City Comptroller Scott Stringer’s decision to run on a similarly progressive platform puts him in the same group, but some business leaders say they believe he would govern in a more centrist fashion, if elected.

Crime has emerged as an overriding concern for business leaders.

“We need police reform and we need to address a spike in crime,” said Cygler, a member of the executive committee of the Brooklyn Chamber of Commerce and former big de Blasio donor. “I grew up in the 1980s when crime rose sharply. We have to address the spike in subway crime and in the use of guns.”

Meanwhile, the city now has the highest personal income tax in the country, and a Citizens Budget Commission report showed its business taxes also are the nation’s steepest. The possibility that the next mayor will seek to raise them further is another concern for both large and small businesses.

Winston Fisher, a politically active real estate executive, noted that the Alliance Capital, which rented more than 1 million square feet of space in one of his buildings, is decamping to Nashville, taking more than 1,000 high-paying finance jobs.

“The reality is New York is under assault as a place to do business,” he said. “We need tax policy that means people believe the money is being spent wisely and not tax policy to be punitive.”

A ‘Deterioration’ in Services

“I would’ve liked to hear more specific policies related to the restaurant and nightlife industry, in terms of how the sector can employ people from all walks of life who need jobs, and how hospitality spurs economic activity in other sectors and brings people out at all hours creating more vibrant and safer streets and subways,” said Andrew Rigie, executive director of the New York Hospitality Alliance, which hasn’t held any fundraisers for candidates and has no endorsement plans.

Real estate leaders like Rudin and Fisher want the next mayor to commit to a campaign to bring back office workers to the city’s major business districts.

Concern about the city’s regulations on businesses remain. Most of the candidates have outlined plans to overhaul the bureaucracy that businesses deal with, but the issue got far less attention at Wednesday’s debate than in the first candidate square-off last month.

“Public safety and concern about deterioration in city service delivery have trumped politics in the mayoral race,” Wylde told THE CITY.

“Candidates with strong records on these issues, regardless of their ideological leanings, are gaining broad support in the final days before the election,” added Wylde, who lent her name to the host committee for a Zoom fundraiser for Garcia and has personally contributed to her campaign, as well as those of Stringer, Donovan and McGuire. The Partnership’s PAC, meanwhile, has supported Adams.

While Wylde has been the most outspoken about Yang’s lack of experience, Cygler and Don Winter, chair of the Manhattan Chamber of Commerce, said the candidate’s knowledge gap is clear when he meets with business groups.

Winter noted a clear contrast with Adams when the Brooklyn borough president met with the members of the Manhattan Chamber.

“Eric Adams was very prepared. He’s tough on issues that are very important and he’s a very strong small business advocate,” he said. “His emphasis on crime is very needed.”

Candidates for NYC mayor told us where they stand on 15 big issues. Now you can pick your positions and see which contenders are the right ones for you.

The Yang campaign responded to the criticism by pointing to his business credentials, including starting a test preparation company.

“It’s clear Andrew’s story — and passion for helping people — is resonating with New Yorkers,” said Alex Sommer, a Yang campaign spokesperson.  “As any small business owner in the city will tell you, starting and growing a company is not for the faint of heart. Andrew’s singular experience among the candidates is exactly the change in leadership New Yorkers are looking for.”

Many business leaders have worked with Stringer over the years both as Manhattan borough president and as a comptroller.

He was generally regarded as a centrist before moving fully into the progressive camp for the mayoral campaign. He notched the the endorsement of many of the city’s progressive groups, including the Working Families Party, before a sexual harassment controversy caused many backers to abandon him.

Still, some business leaders haven’t written him off.

“Scott is a good guy and a bright guy but with a desire to appeal to a certain group,” said Winter. “If elected, I hope he will moderate those positions.”

Business leaders are not interested in the Republican primary because they believe the winner of the Democratic primary will easily win the general election in November.

Many business people have funded independent expenditure groups that have backed preferred candidates, with most of the money going to boost Adams, Yang, Donovan and McGuire. Charter school supporters have moved strongly behind Adams and Yang.

While no one will say so on the record, these leaders are also disappointed that McGuire has not emerged as a stronger candidate in the race.

Although Fisher Brothers has contributed to Adams, Donovan and Yang, Winston Fisher said he is still deciding how he will rank the candidates when he votes.

All of them agree the election is crucial for the city’s future.

“There was this horrible pandemic, coming out of it the state raised taxes, the crime rate is rising and a lot of high-income earners are leaving the city,” said Winter. “The next mayor will play a pivotal role in bringing the city back to life or take us in the exact opposite direction.”

This article was originally posted on Who’s the NYC Business Community’s Choice for Mayor?

Sniffing out truffles in Washington’s woods