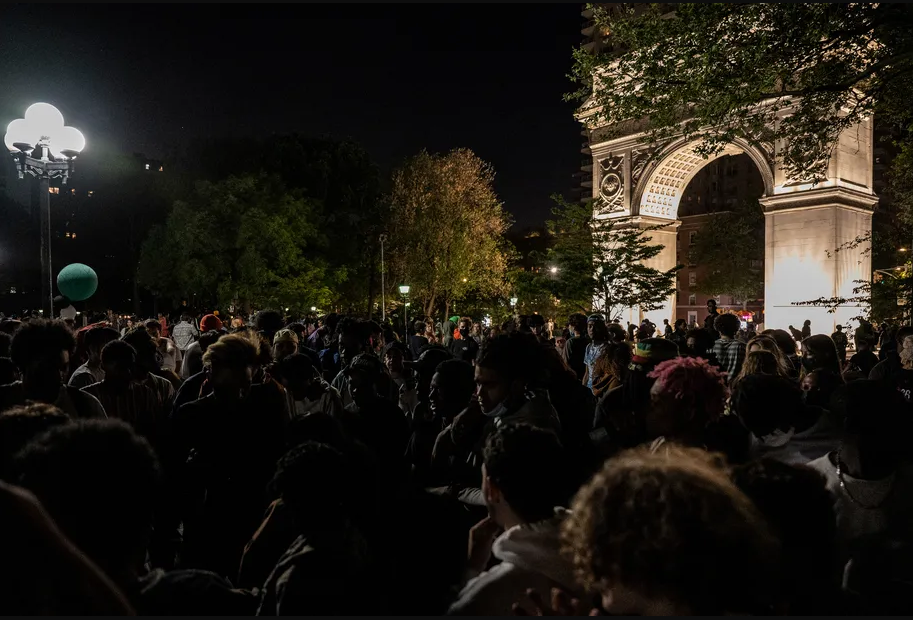 But his administration had received scores of complaints about wild partying, fireworks and other activities there at least as early as April, records obtained by THE CITY under New York’s Freedom of Information Law show.

From April 1 to June 15, locals used 311 — via web, text and phone calls — to file more than 190 service requests about the 10-acre public park. Some pleaded for the city to close the Manhattan oasis, lamenting lost sleep and peace.

“Deafening amplification of singing and music […] near the fountain that can be heard for blocks around,” one person wrote at 10:43 p.m. on April 6, a Tuesday. “This singing has been stopped many times by the 6th precinct but keeps returning when the police leave.”

Police enforced the 10 p.m. curfew into the first weekend of June, arresting 23 people amid clashes on the night of June 5. With the curfew suspended mid-month, cops made more than a dozen total arrests at the park during the Pride and July Fourth weekends.

Although the park once again officially closes at midnight, police say they’re assessing closing times daily and may yet restore a curfew. Meanwhile, a community meeting about problems at the park is scheduled for Wednesday.

The increased policing at the park, long a site of civic life, has emerged as a key battle over public space as the city recovers from the pandemic. Activists, park users, and politicians have slammed the NYPD for employing heavy-handed tactics, while de Blasio and some residents have staunchly defended cops’ actions.

Many parkgoers come from other parts of the city, looking to mingle after months of COVID restrictions. That’s all made predominately white and affluent Greenwich Village a flashpoint for tense conversations about race, wealth, and power.

About three-quarters of the 311 complaints reviewed by THE CITY were categorized as noise problems. Another 9% were specifically about fireworks, 6% about maintenance issues and 3% about alleged drug activity.

Nearly 90% of the complaints were routed to the NYPD, while most of the rest went to the Department of Parks and Recreation. Some 37% were classified as “corrected” while 33% were deemed “unfounded,” “unnecessary” or “insufficient.” Another 15% were referred to the NYPD by another agency, records show, though no additional information was offered.

The records also don’t account for other channels people might’ve contacted the city through, nor do they specify how complaints were resolved. That isn’t uncommon, according to the City Council, which has found that “for a surprising number of requests, issues are not addressed and resolutions stated by 311 are vague or inadequate.”

It’s also not unusual for noise complaints to go unsubstantiated. In 2018, the state Comptroller’s Office determined that city agencies couldn’t confirm noise in most of the 1.6 million 311 cases it reviewed from 2010 to 2015. The NYPD handled 1.3 million of these, substantiating only 29% while administering about 5,500 summonses and making 800 arrests.

The Washington Square Park-related complaints spiked in late May and early June, coinciding with the curfew and media coverage. The 311 reports were filed primarily between 9 p.m. and 1 a.m.

Police apparently responded to complaints about loud music on April 8, but then the music resumed after 15 minutes, a complainant reported. Cops also intervened two nights later, when a group allegedly refused to leave the park at curfew time and threw bottles at officers.

But law enforcement was inconsistent, the 311 complaints indicate, and by mid-May the park was starting to attract international attention over partying and litter. The NYPD has said it faced “sometimes violent groups [that] engaged in disorderly behavior,” including “jumping on vehicles, making threats to officers, [and] throwing objects.”

On May 28, the first day of the curfew, the Washington Square Association said it was “deeply dismayed by the recent chaos and lawlessness” at the park. “What we are witnessing is worse than the 80’s crack epidemic,” the group decried.

“Yet another late night dance/rave party in Washington square Park,” one person wrote at 11:46 p.m. on June 2. “Those of us who live near the park have trouble getting to sleep.”

De Blasio’s office didn’t respond to THE CITY’s inquiries about the 311 records. But de Blasio acknowledged during a NY1 interview last month that his team had originally discussed the curfew with police.

“When there’s not a willingness to follow the rules, we got to set a clear line,” he said on “Inside City Hall” on June 7.

In a statement, the NYPD said it’s reviewing the closing time on an “ongoing basis.” The statement cited June 6, when officers didn’t enforce the curfew, as “a marked improvement to the disruptive conduct in the park [that] highlights the department’s flexibility to dynamic circumstances as they unfold.”

Complaints about cleanliness, drugs, and homelessness also figure in the records obtained by THE CITY, albeit far fewer than gripes about noise. Just 10 complaints were categorized as “maintenance or facility,” six as “drug activity,” one as “panhandling,” and one as “graffiti.”

“Washington Square Park is disgusting and dangerous,” a complainant wrote on April 9. “There is broken glass everywhere! […] I have lived here fir [sic] over 26 years and have never seen it this bad.”

“People smoking crack in front of my baby and walking thru Washington Square Park NW corner,” someone wrote at 11:11 p.m. on May 24. “Awesome[.]”

The next day, police closed the northwest corner with barriers, the New York Post reported. On the morning of May 26, someone reported that two homeless people were “camped out inside the playground” at the park’s northeast corner.

“One sleeping, one pacing,” they wrote. “Would love if someone from the parks department could tell them to move along.”

In a statement, the parks department said it’s working with police to balance “education and enforcement against illegal and after hour activities” at the park. The agency confirmed that 311 complaints and staff observations factor into enforcement decisions, noting that the park is cleaned daily.

A Symbol of Division

On June 16, at an emergency community meeting organized by the NYPD, Greenwich Village residents largely voiced support for the 10 p.m. curfew. Police leaders told the more than 100 attendees that the department had their backs.

“We’re ready to protect you,” said Chief of Department Rodney Harrison. “We’re going to do whatever it takes to make sure you feel comfortable.”

Meanwhile, a group of counter-protesters demonstrated outside the church where the meeting was held, barred from entering because of capacity restrictions. A DJ who plays music at Washington Square Park told The Village Sun that disgruntled residents “don’t like the demographic in the park [and that] things have changed.”

Despite the schism, de Blasio essentially declared mission accomplished earlier this month. “People in the chain of command were told very clearly ‘we expect better,’ and that situation was addressed quickly,” he said on WNYC’s “The Brian Lehrer Show” on July 2.

“We must have parks, not like Washington Square, where people are injecting themselves with drugs while babies are trying to play,” he recently said on ABC’s “This Week.”

Yet it’s far from the only place where New Yorkers have asked officials to intervene in community conflicts. Included among the 311 records THE CITY obtained was a noise complaint from Soundview, a majority Black and Latino neighborhood in The Bronx, that happened to contain the Manhattan park’s name in the description.

“The 2nd attempt to get help from our wonderful NYPD was yet closed again stating it did not warrant police action, but if we decide to hang out at Washington Square park where all the privileged white people who own brownstones [are, the] neighborhood calls for a curfew,” read the complaint, filed at 11:55 p.m. on June 6. “[B]ut since we live in Soundview […] anything can happen here and the Police does not care.”

The request was closed out as “unnecessary.”