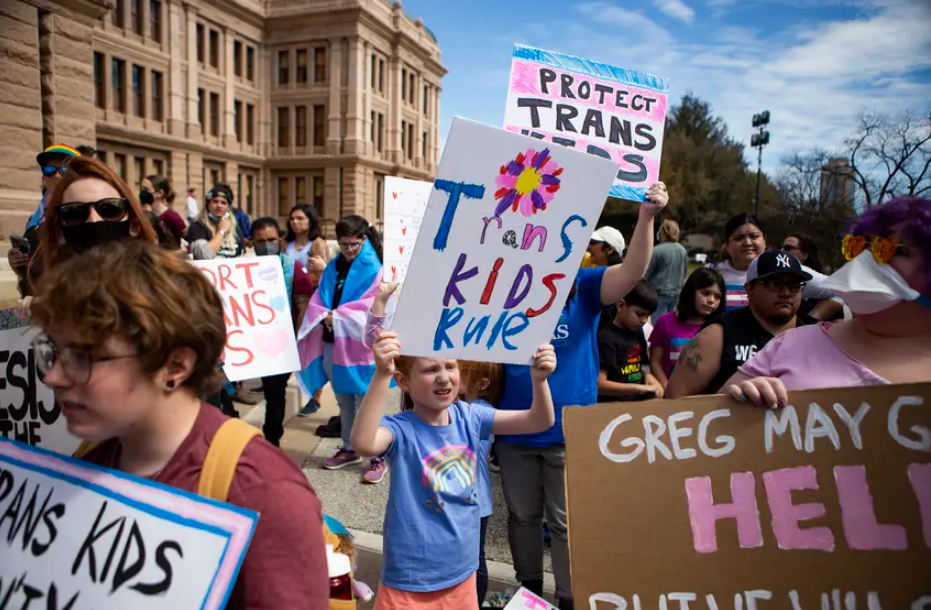 In 2016, when Texas tried to stop transgender students from using the bathroom of their choice, there were protests, press conferences and a whole lot of anger directed toward the state’s elected officials.

But one mom tried something different — she invited Attorney General Ken Paxton to have dinner at her house with her 8-year-old transgender son. Amber Briggle told The 19th recently that Paxton and her son washed up together in the bathroom before dinner.

“He turns around and looks and says, ‘This is nice. It’s been a while since I had kids this age,’” Briggle told The 19th.

More than five years later, Paxton has helped set in motion a targeting of families with trans kids unlike anything experts or lawyers say they’ve ever seen — and the Briggles are now caught in the crosshairs.

According to their attorney, they are one of several families who are being investigated for child abuse for providing gender-affirming medical care to their children.

“Raising a transgender child in Texas has been one long political emergency,” they said in a statement provided by their lawyer. “It always seemed like this day would come. Now it has arrived.”

While most gender-affirming care focuses on “social transition” — allowing a child to express their gender how they’d like — some transgender children take puberty blockers, a completely reversible medical treatment that’s prescribed for a wide range of situations beyond transition. Paxton and Abbott also cited concerns over gender-affirming surgeries that are rarely, if ever, used on children.

Since Abbott’s letter, The Texas Tribune has been able to confirm that Child Protective Services has opened investigations into at least five families — and the real number may be much higher. A spokesperson for the agency said they could not confirm the number of active investigations due to pending litigation.

The Briggle family said in their statement that a CPS caseworker interviewed them and their children and inspected their house.

“We showed her all the food in our cabinets, the kids’ artwork on the walls, the toys, books, and games in the family room … The gardens and trampoline in the backyard. The beds piled with blankets and stuffed animals,” they said in the statement. “It was impossible for her not to feel the love in our home.”

The investigator told them they were “clearly doing something right,” according to the statement. But the investigation remains open.

“We are the family you would want to place a foster child with, not the family whose children should become foster kids themselves,” they said. “And yet, the government is attempting to rip our family apart because we love our children unconditionally. Is this who we are, America?”

A lawsuit filed by the American Civil Liberties Union of Texas and Lambda Legal has managed to block one of these investigations from proceeding with a temporary restraining order. A judge is set to consider a statewide injunction on Friday, though that hearing is stayed at the moment while Paxton appeals the restraining order.

The Briggle family, in their statement, called on people in Texas and around the country to push back against these policies.

“We need you to not normalize this state terrorism through your silence. Don’t just wring your hands. We need you to draw a line right here,” they wrote. “It is not acceptable that some Americans have to flee their homes to secure their civil rights. Stop telling us to move. Help us.”

Massachusetts pandemic recovery ‘may be slow’ even as restrictions lift, economist says