Please ensure Javascript is enabled for purposes of website accessibilityParents of Memphis boys at the center of Cummings school shooting call for healing, forgiveness – Capitol Hill Pulse Skip to the content 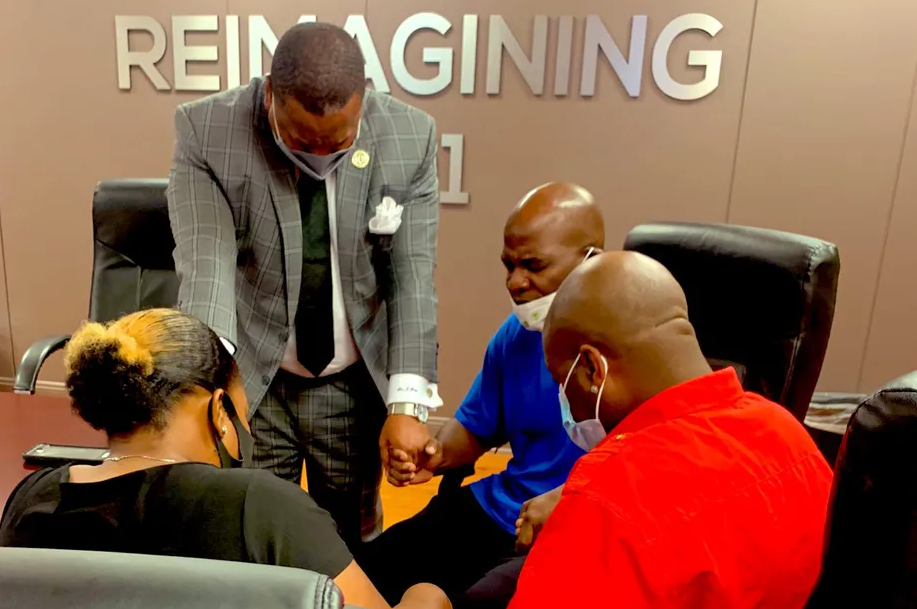 Parents of Memphis boys at the center of Cummings school shooting call for healing, forgiveness

Less than a week after a 13-year-old boy shot another student in a stairwell at a Memphis school, the parents of both children came together, holding hands and praying for the healing of their sons and their city.

The victim, also 13, is recovering from his injuries and has since returned to school. The alleged shooter remains in police custody.

Parents of both boys met with Shelby County Schools Superintendent Joris Ray for about an hour on Tuesday at the Board of Education. The district declined to say who else attended the meeting. But Ray said Wednesday that the victim’s father, Emory Hammonds, initiated the meeting, adding that his compassion and desire to forgive was “so overwhelming.”

The shooting occurred at Cummings K-8 Optional School on Sept. 30. The alleged shooter has been charged with attempted first-degree murder.

His parents agreed to meet with the victim’s family, Ray said, and they discussed how to prevent gun violence in the community, bonding over the shared trauma of losing loved ones to gun violence. During the conversation, both the alleged shooter’s and the victim’s parents “acknowledged some things they could have done differently as parents,” Ray said.

Ray called the parents “a blessing to uplift the community” and said they were an example for Memphis and beyond.

At a press conference Wednesday, Ray said, “At the end of the day, these are both my students,” and sometimes students make mistakes. “So what I wanted to do is get both sets of parents and to have a meaningful dialogue around healing to try to figure out the root cause of the issue and to really wrap our arms around both students.”

With the case ongoing, the district declined to comment on a possible motive.

According to the police report, the students met in the hallway to fight, and the fight escalated to gunfire, leaving the victim shot in the stomach.

Shelby County Schools spokesperson Jerica Phillips called Tuesday’s meeting between families a beautiful moment, in which the parents spoke of choosing love and the power of reconciliation.

“It was really important to bring them together, and it was also a spirit of forgiveness from the father, as you saw, of the young man who was hurt.”

Ray said the district is determined to support both families and the other members of the Cummings community in the aftermath of the shooting, noting: “This is how — and the only way — we will heal as a city.”

This article was originally posted on Parents of Memphis boys at the center of Cummings school shooting call for healing, forgiveness