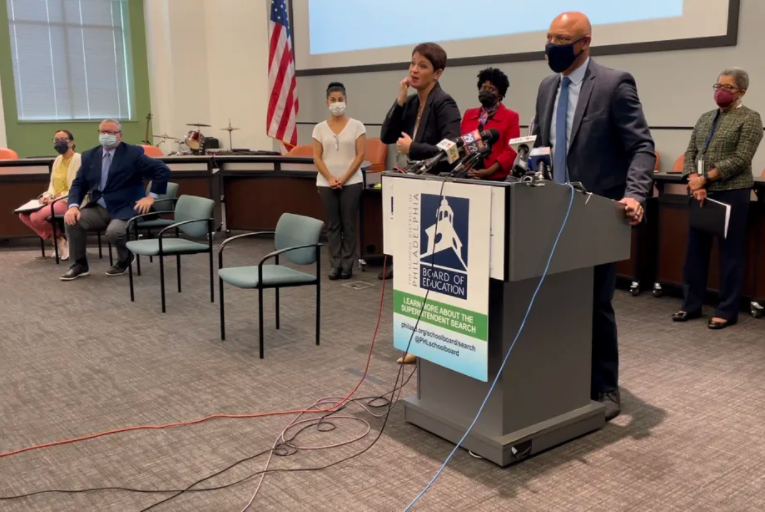 Philadelphia’s Board of Education will vote Thursday on whether to approve a contract with a search firm to lead the effort to find a new district leader.

Superintendent William Hite announced last month that he will step down next year.

The firm Isaacson, Miller, which is based in Boston but has an office in Center City, will be paid up to $190,000. The firm has led leadership searches for a variety of public and nonprofit organizations, including colleges, foundations, arts and cultural groups, and other public school districts. It also has worked for educational organizations on issues involving social justice and advocacy.
Six firms applied during a public RFP process, with proposals due last week. Isaacson, Miller scored the highest during a review, according to a school board representative.

“During this public input process, we have continued to hear that the next superintendent needs to understand Philadelphia,” said Board Vice President Leticia Egea-Hinton in a press release Tuesday. “Following a rigorous review process, Isaacson, Miller emerged as a clear choice, both because of their exceptional reputation and their deep experience working with diverse institutions and communities across our city.”

Once the contract is authorized, the search firm will collect candidate resumes, list the job description, and vet potential candidates. In February, an advisory committee will interview the top five candidates.

Public forums with two finalists are expected by February or March, with a new leader hired in the spring. The new superintendent will likely start in August.

School board members promised last month to have a robust public process to choose a successor to Hite, who is leaving after nearly 10 years leading the district. Hite said he plans to support the transition until the end of his contract on Aug. 31. The public process started earlier this month, with a survey to allow the public to share what qualities they would like to see in the next superintendent.

In the last 16 days, the board has hosted or participated in 34 listening sessions, connected with 832 people, and received 1,002 completed surveys, according to the school board. Megan Smith of Brownstone Communications was hired to oversee the community engagement process.

The board will review the feedback collected in the sessions and surveys, and evaluate it alongside the objectives of its accountability system known as “goals & guardrails.”