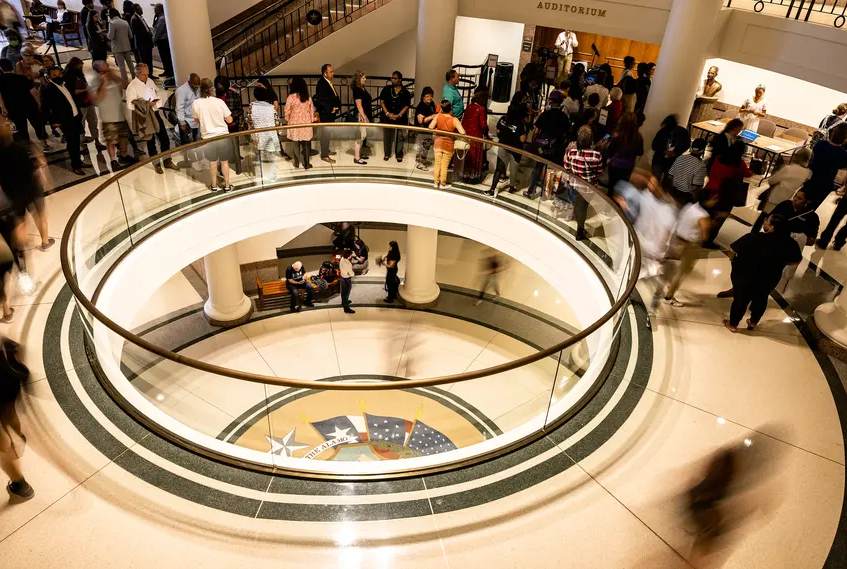 Claudia Torres-Yañez walked into the Texas Capitol at 7:30 a.m. Saturday to testify against Republican efforts to enact new voting restrictions in the state.

Fifteen hours later, she was still waiting to be heard by lawmakers.

Republicans’ second attempt to further tighten the state’s voting rules drew an enormous crowd to the Capitol on a Saturday morning as hundreds of Texans — most of them in opposition to the legislation — showed up to speak before state lawmakers in overlapping Senate and House hearings on similar bills.

By Saturday evening, 295 had signed up to testify at the House’s hearing. Many of them had registered their place in line as early as 8 a.m. But public testimony in the House committee would not begin until 1:41 a.m. on Sunday — 17-and-a-half hours after the meeting began.

Torres-Yañez’s first attempt to be part of the legislative process in the spring ended in disappointment when state Rep. Briscoe Cain, who chairs the House Elections Committee, abruptly adjourned a hearing on a previous version of the voting legislation after refusing to take questions from a Democratic colleague. But Cain, a Deer Park Republican, committed a procedural error that meant the hearing could not continue. Torres-Yañez, a human resources director, was among the more than 100 members of the public who were dispatched without being able to testify.

“Once I saw I had another opportunity — unfortunately — I wasn’t going to miss my chance,” Torres-Yañez, who opposes the Republican proposal. Biding her time in the Capitol basement at 11:30 p.m., she said she planned to stick it out.

The legislation on the table in many ways resembles the contentious GOP-backed voting bill that failed during the regular legislative session that ended in May after House Democrats orchestrated a walkout to break quorum before the chamber could give the bill a final vote.

In the Senate committee considering the legislation, the hearing on the bill moved at a quicker pace, but scores of Texans were still waiting well past midnight to make their case to the committee.

Torres-Yañez was called up to testify before the Senate committee around 9:30 p.m., reading in part from her hand-written notes during the two minutes allotted to her.

Like others waiting to testify, she still had a long wait ahead of her in the House committee. For the second time in their efforts to advance their proposals, lawmakers would push their consideration late into the night and early hours of the morning.

The House’s registration figures showed 484 members of the public had come to the Capitol to register a position on the chamber’s bill, with 407 marking themselves as opposed to the legislation, 65 in support and 12 as neutral.

The Senate’s hearing started up at 11 a.m. with public testimony beginning a few hours later and running until early Sunday morning. As lawmakers worked through the roster of witnesses signed up to testify early Sunday, their list narrowed as they called the names of Texans who had left the Capitol.

The House’s hearing started at 8 a.m., but the committee was consumed for hours on GOP priority bail legislation. When lawmakers finally began considering the voting legislation at about 5:30 p.m., they spent more than four hours questioning the bill’s author, state Rep. Andrew Murr, a Junction Republican. Much of that questioning was carried out by Democrats on the committee for whom the committee hearing presented the only opportunity to ask questions of Murr at length. Debate on the House floor is time-limited.

But the lengthy quizzing meant Texans were left waiting their turn before the committee for hours and hours — longer than many were able to manage.

The House committee voted early Sunday morning to advance the legislation to the full House. In a statement following the vote, state Rep. Chris Turner, D-Grand Prairie, the chair of the Texas House Democratic Caucus, criticized the hearing, saying: “You just can’t make this up: Republicans are passing anti-voter legislation overnight to prohibit Texans from casting a ballot overnight.”

For advocates for people with disabilities, the special session offered them the first opportunity during the debate over the voting bills to bring their voting experiences to the legislative forefront in larger numbers. The first round of the fight over the voting bills began before vaccinations were widely available, making a trip to the Capitol too risky for medically vulnerable people.

Some of the voters with disabilities they encouraged to come to the Capitol to testify got their time before lawmakers in the Senate, where public testimony began earlier in the day, but others went home before getting their turn in the House committee, said Chase Bearden, the deputy executive director for the Coalition of Texans with Disabilities. One voter who had come to testify was forced to leave before being called up because the bus service they use to get home ended at midnight.

“Each [voter] has their own unique story,” Bearden said. “When you’re discussing policy but you don’t have real lived experience, you don’t have the information you need.”

In hopes of opening the legislative process to more everyday Texans, MOVE Texas had organized a training on how to effectively provide public testimony. On Saturday, the organization focused on increasing youth participation in elections shepherded 50 attendees through the Capitol, providing guidance on how to sign up to testify and where they could wait their turns.

One witness was so committed to testify that they left to carry out a work shift and came back, said Amber Mills, an advocacy organizer for MOVE Texas. But as the committee hearing extended late into the night, just about 20 from their group remained in the Capitol as of 11 p.m.

The rooms previously designated as overflow, which had housed some of the people waiting to testify, sat dark and empty far before the House would begin public testimony. As Saturday turned to Sunday, members of the Delta Sigma Theta Sorority — clad in the historically Black sorority’s trademark red jackets — sat in the committee room in the same seats they had arrived at the Capitol at 6 a.m. to claim.

Nearly 50 members of the sorority had traveled from across the state to testify on the legislation, but just 19 had stuck it out, said Michelle Brown, one of the group’s leaders. Those who left would be working to submit their testimony in writing.

“All we want is a fair opportunity to have our voices heard in the election process,” Brown said around 1 a.m. while still waiting to testify.

As state Rep. Trent Ashby, the chair of the House committee considering the legislation, worked to free up seats in the committee hearing room for those waiting to testify, he looked around the room to call up the women holding most of the seats.

“If you were here at 8 o’clock, raise your hand,” said Ashby, R-Lukfin.

A collection of red sleeves went up.