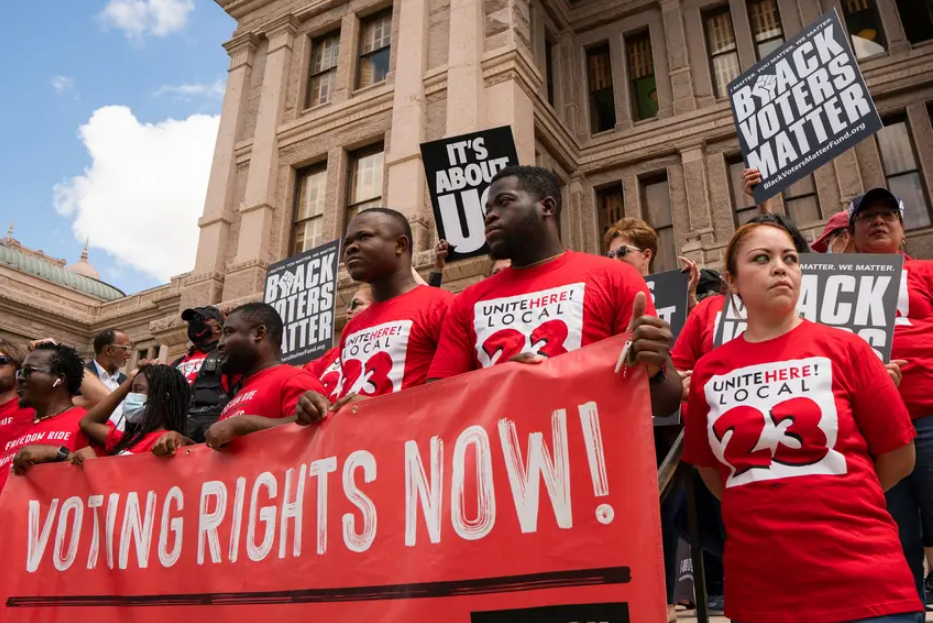 With the Texas Legislature gaveled back in for legislative overtime, the House and Senate have each revealed their opening bids in the GOP’s push to enact new voting restrictions, finding common ground on proposals to narrow local control of elections.

Unlike during the spring’s regular legislative session, Republicans from both chambers appear more closely aligned in their starting approaches to the priority voting legislation that Gov. Greg Abbott put on the agenda for the special session that began Thursday. In Senate Bill 1 and House Bill 3, both chambers have revived proposals to further clamp down the state’s voting-by-mail rules, and rein in initiatives that Harris County — the state’s largest county that is home to Houston and a diverse population — attempted in 2020 to widen access to voting.

Both bills carry over measures from the regular session to bolster protections for partisan poll watchers and embrace new ID requirements for voting by mail that were added at the last minute to the sweeping voting bill, known as Senate Bill 7, that Democrats doomed in May when they staged an 11th hour walkout to break quorum.

But Republicans in the Senate are also going beyond that failed bill to introduce new proposals, including a monthly review of the state’s massive voter rolls to identify possible non-citizens.

Here’s a breakdown of some of the most significant portions of the wide-ranging legislation that will be considered in the next few weeks.

A ban on drive-thru voting

Both SB 1 and HB 3 outlaw the sort of drive-thru voting offered by Harris County last year by requiring voting to occur inside a building.

Harris County first tested drive-thru voting in a summer 2020 primary runoff election with little controversy, but its use of 10 drive-thru polling places for the November general election came under Republican scrutiny.

The county’s drive-thru polling places were mostly set up under large tents. Voters remained in their cars and showed a photo ID and verified their registration before casting ballots on portable voting machines. At the Toyota Center — home of the Houston Rockets — drive-thru voting was located in a garage. The option proved popular, with 1 in 10 in-person early voters in the county casting their ballots at drive-thru locations.

New regulations for early voting hours, including a ban on 24-hour voting

Both bills also regulate early voting hours to preempt the expanded early voting offered in Harris County, which also pioneered 24 hours of uninterrupted voting at a few polling places for one day. The House wants to establish a new voting window of 6 a.m. to 10 p.m. while the Senate would cut off voting at 9 p.m.

As expected, the House and Senate both retreated from a controversial proposal to restrict the start time for Sunday early voting hours, which was derided as an attack on “souls to the polls” efforts focused on Black churchgoers. Instead, both chambers are applying their new window of voting to weekend hours and adding an extra hour of required voting hours, moving it from 5 hours to 6.

A ban on the distribution of mail-in ballot applications

The proposal is a direct response to Harris County’s attempt to proactively send applications to all 2.4 million registered voters last year with specific instructions on how to determine if they were eligible. The Texas Supreme Court ultimately blocked that effort, but other Texas counties sent applications to voters 65 and older without much scrutiny. Though those voters automatically qualify to vote by mail, mailing unrequested applications to them in the future would also be blocked.

Both the House and Senate are proposing to alter the rules used to verify applications to vote-by-mail and returned ballots. The bills would set new ID requirements so voters must provide their driver’s license number, or if they don’t have one, the last four digits of their Social Security number on applications for those ballots. For their votes to be counted, voters will be required to include matching information on the envelopes used to return their ballots.

Those requirements were added behind closed doors to the final version of the failed voting legislation during the regular session and haven’t been widely debated. The language comes from separate Republican bills that failed to pass in the spring.

Texas generally has strict rules outlining who can receive a paper ballot that can be filled out at home and returned in the mail or dropped off in person on Election Day. The option is limited to voters who are 65 and older, will be out of the county during the election, are confined in jail but otherwise still eligible or cite a disability or illness that keeps them from voting in person without needing help or without the risk of injuring their health. The state currently uses a signature matching process to verify completed ballots.

A correction process for mail-in ballots

In what appears to be a concession to Democrats, HB 3 and SB 1 both include language to create a new correction process for mail-in ballots that are ordinarily rejected because of a missing signature or an endorsement a local review board determines does not belong to the voter who returned the ballot.

The language, pushed by Democrats, was included in a negotiated version of the voting legislation that left the House during the regular session but was ultimately left off the final version of the bill.

SB 1 strays from the House’s legislation by setting up monthly reviews of the state’s voter rolls to identify noncitizens — harkening back to the state’s botched 2019 voter rolls review. The bill would require the Texas secretary of state’s office to compare the massive statewide voter registration list with data from the Department of Public Safety to pinpoint individuals who told the department they were not citizens when they obtained or renewed their driver’s license or ID card.

That sort of review landed the state in federal court over concerns it targeted naturalized citizens who were classified as “possible non-U.S citizens” and set up to receive notices from their local voter registrar demanding they prove their citizenship to keep their registrations safe.

State election officials ultimately ended that effort as part of an agreement to settle three legal challenges and agreed to rework their methodology to only flag voters who provided DPS with documentation showing they were not citizens after they were registered to vote. But they do not appear to have ever taken up the effort after that debacle.

While the Senate bill does not reference that agreement, it indicates that the secretary of state’s office would be responsible for setting up rules to implement the review.

Meanwhile, HB 3 includes language in response to the controversial illegal voting conviction of Crystal Mason, a Tarrant County woman facing a five-year prison sentence for casting a provisional ballot in the 2016 election. Democrats pushed to add that language to the voting legislation during the regular legislative session.

Mason was on supervised release for a federal conviction at the time and said she didn’t know that made her ineligible to vote. HB 3 would require judges to inform someone if a conviction will prohibit them from voting and require proof beyond a provisional ballot for an attempt to cast an illegal vote to count as a crime.

Both bills include language to strengthen the autonomy of partisan poll watchers at polling places by granting them “free movement” within a polling place, except for being present at a voting station when a voter is filling out their ballot. Both chambers also want to make it a criminal offense to obstruct their view or distance the watcher “in a manner that would make observation not reasonably effective.”

Currently, poll watchers are entitled to sit or stand “conveniently near” election workers, and it is a criminal offense to prevent them from observing.