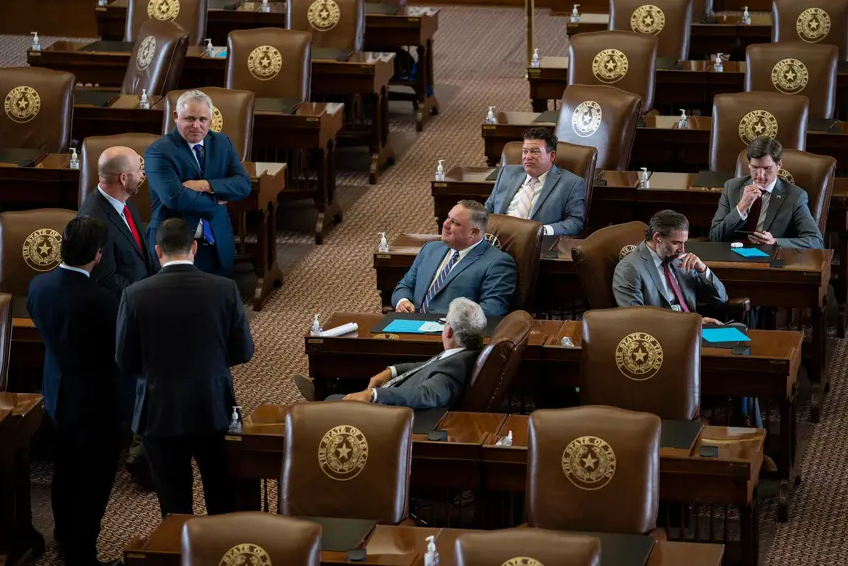 With time running out, Texas Legislature still at impasse on GOP elections bill

Heading into the last week of the special legislative session, the partisan standoff over Texas Republicans’ priority elections bill is no closer to a resolution in Austin.

Enough House Democrats to prevent a quorum — 100 of the 150 House members have to be together to conduct official business — are still camped out in the nation’s capital, and Republicans are still waiting for them back in Austin, toiling through the daily monotony.

The few glimmers of hope for negotiation are long gone, and neither side appears to be in the mood for dialogue. Republicans believe they have already compromised plenty on the legislation, while Democrats are distrustful of both the policy driving the legislation and their GOP colleagues after seeing how they have managed the process around the bill so far.

Gov. Greg Abbott has vowed to call special session after special session until the elections bill passes, and he has said the next one will begin the day after this one ends; a special session can end early, but can’t go longer than 30 days, and Friday is the 30th day.

If there is another special session, Lt. Gov. Dan Patrick has indicated the Senate will pass elections legislation similar to what it passed during this one, which could close the door on any potential further negotiations between Republicans and Democrats.

Rep. Chris Turner of Grand Prairie, chairman of the House Democratic Caucus, told reporters last week that the quorum-breaking Democrats have been “very clear” about their goals from the start — stopping the elections bill in the current special session and advocating for federal voting rights legislation.

“We’re not here in Washington to try to negotiate a bill that, for all indications, [Republicans] don’t have an interest in negotiating with us or talking with us about,” Turner said during a news conference. “So we’re here to press the case in Washington and we’re here to run out the clock on this special session, and we’ll deal with whatever comes next down the road.”

Asked if he knew how many Democrats planned to remain in Washington beyond the last day of the special session, Turner said no.

Besides the elections bill, there has been little progress made toward restoring legislative funding that Abbott vetoed in retaliation for the Democrats’ initial walkout over the bill. The clock is ticking — the funding was set to begin Sept. 1.

That issue could be resolved at the Texas Supreme Court, after a group that includes House Democrats and legislative staffers asked the court to override Abbott’s veto.

Should time run out before the court weighs in or lawmakers act, salaries and benefits for over 2,000 state employees will be at risk, along with a number of other services and contracts, as House Administration Chair Will Metcalf, a Conroe Republican, laid out in a July 26 memo to members of the lower chamber.

“The implications to the operation of the House are significant,” Metcalf wrote, outlining the legislative business that could be canceled if funding is not restored, such as lease payments for members’ district offices, office supplies and cleaning services for the House.

As mostly Republican legislators await action inside the Capitol, activism has persisted outside in support of the absent Democrats. Beto O’Rourke, a former member of Congress and unsuccessful candidate for U.S. Senate and the presidency, helped lead a march from Georgetown that started Wednesday and ended Saturday at the state Capitol with a rally featuring a performance by Willie Nelson.

O’Rourke was joined by the Rev. William Barber, a national civil rights activist who used his rally speech to pressure President Joe Biden to do more to muscle federal voting rights legislation through Congress.

“Biden, we loved your speech in Philadelphia, but you’ve got to come to Texas and stop just talking to those politicians who tell you what can’t be done,” Barber said. “Come talk to the people in Texas.”

The Texas House Democrats in Washington were newly optimistic Friday when Biden and Vice President Kamala Harris met with Democratic congressional leaders about federal voting rights legislation. While the push remains a long shot in Congress, the White House released a statement after the meeting saying the leaders “agreed on the moral imperative of passing” such legislation “and will continue working together toward that goal urgently.”

As for Republicans in Austin, they got their own small dose of optimism at the beginning of last week, when a few legislative Democrats resurfaced in Austin. But only one of them, Rep. Philip Cortez of San Antonio, was part of the core group of 57 Democrats who had broken quorum, and he returned to Washington days later, citing unproductive talks on the elections bill in Austin. He had also gotten grief from some in his own party who were blindsided by his temporary return to Austin.

House Speaker Dade Phelan, R-Beaumont, issued a civil warrant for Cortez’s arrest, but it came after Cortez had already returned to the nation’s capital — outside state jurisdiction. Even then, not all Republicans were hostile to the breakaway Democrat.

“We certainly understand why the speaker did what he did and that’s certainly is his right to do so,” Rep. Jim Murphy, head of the House GOP caucus, said during a news conference the day after Phelan announced the warrant.

Phelan’s action though has continued to fuel tensions between Republicans and Democrats, many of whom have long-standing relationships with members from the other party.

Strains on those relationships could affect the legislative process in the House during a second special session, and it’s unclear what actions, if any, might ease that dynamic in another overtime round — especially if lawmakers are ordered back to Austin quickly after the current session ends.

The most polarizing source of that tension has been over the elections bill, with Republicans and Democrats saying the other acted in bad faith while negotiating the legislation.

Republicans point to a number of conversations they had with Democrats about the elections bill even before the special session began in July.

Those talks, according to lawmakers from both parties who were involved, included granting requests from Democrats for both a new House author to carry the legislation as well as a new House committee to consider the bill. Members part of those conversations also negotiated specific provisions in the legislation before the bill was filed, according to those lawmakers.

“You know as well as I do that this legislation has been negotiated in good faith and deserves your attention,” said Rep. Travis Clardy, R-Nacogdoches, during a congressional hearing last week on voting rights, referring to the quorum-busting Democrats. “You’ve had your fun, it’s time to come home.”

This article was originally posted on With time running out, Texas Legislature still at impasse on GOP elections bill

Muscles are important, but stiff tendons are the secret ingredient for high-speed performance

Face masks in Washington schools will not be optional