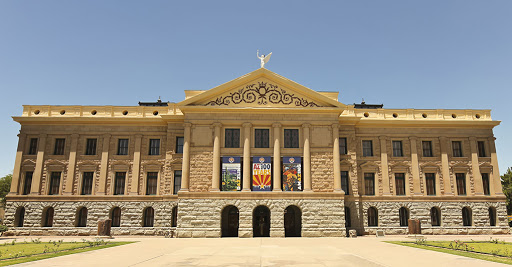 After hours of contentious debate and a clearing of rowdy teachers and activists in the gallery, Arizona House Republicans took the final steps to get Gov. Doug Ducey a budget.

The $13 billion spending plans includes the largest income tax cut in state history. Should Ducey sign it, the state’s four-tier income tax would eventually flatten to 2.5%, a lower rate than the lowest current tier. It would also cap the state’s top income tax percentage that could be paid to 4.5%, meaning high-earners and businesses whose income triggers Prop. 208’s 3.5% surcharge would pay only an additional 1% into state coffers. The majority of the tax savings would go to high-earning taxpayers because they pay the near-majority of taxes, but an analysis from Ducey’s office shows the median income family would save approximately $300.

The package of bills remained in gridlock due to objections from a handful of Republicans, which meant the thin majority required for partisan passage wasn’t possible.

To sway the hesitant Republicans, bill sponsors added amendments that would make the changes they sought. Also included to persuade hesitant Republicans was a concession from Ducey that he would allow his emergency declaration to expire after the state collects $450 million in COVID-19 relief funds from the federal government, according to a report from Tucson.com.

Ducey reacted to the passage.

“Every Arizonan—no matter how much they make—wins with this legislation. They will get to keep more of the money they earn under this tax plan,” said Ducey. “It will protect small businesses from a devastating 77 percent tax increase, it ensures working families and all Arizona taxpayers get to spend their money how they choose, and it will help our state stay competitive so we can continue to attract good-paying jobs.”

Democrats rallied teachers and activists to fill the House gallery, but Republican leadership asked that some be cleared after they became unruly early in the session.

Democrats called the 4.5% cap a gift to Arizona’s wealthy at the expense of public services.

Republicans said the tax cut is necessary to avoid the economic ramifications of a 75% tax hike on job creators and wealthy taxpayers who are able to choose other states to live in.

“If we went to an 8% tax rate, we would not be competitive,” said Rep. Steve Kaiser, R-Phoenix.

Tax cuts in Arizona are easier to enact than tax increases at the legislative level since a tax hike requires a three-fourths majority in each chamber.

Organizations who fought for, and against, the tax cut reacted to the bill’s passage.

“Today’s vote is a huge victory for our state, setting up economic growth for years to come,” said Steven Shadegg, Arizona director of Americans for Prosperity. “With a surplus of nearly $4 billion by 2022, enabling Arizonans to keep more of what they earn will help small businesses grow and create more jobs and increase our state’s competitiveness for residents looking to relocate from high tax states.”

Shadegg, along with organizations like Americans for Tax Reform, had been pushing lawmakers for the tax cut.

“Today Arizona passed a historic and game changing budget that reduces taxes for all taxpayers and moves Arizona to a flat tax on the road to phasing out the entire state income tax,” said Grover Norquist, president of Americans for Tax Reform. “Already there are eight states with no state income tax.”

Progressive organizations warn that the revenue cut will worsen the state’s standing in teacher pay.

“The [Arizona Legislature] is poised to permanently cut $1B+ in state revenues, the largest tax cut in the last three decades,” the left-leaning Arizona Center for Economic Progress said Thursday. “This will make AZ’s tax system more regressive than it is today with 93% of the tax cuts going to people in the top 20% of incomes.”