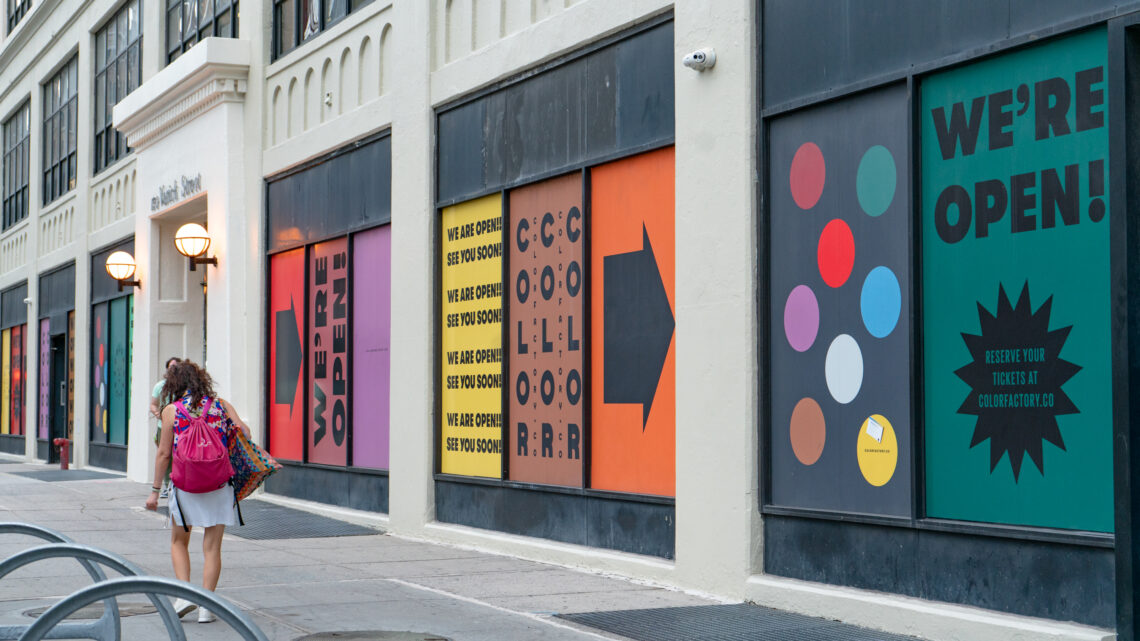 Commercial Districts Grapple With Slowed Return to Business as Usual

Before the pandemic, 60,000 people a day came to Hudson Square in Lower Manhattan. Despite the recovery from the COVID shutdown, now only about 15,000 people show up most weekdays.

In Flatiron, there is usually a line waiting to get into the new Harry Potter store on Broadway at 22nd Street. On each of the other corners of the intersection, large stores remain vacant.

Foot traffic in downtown Brooklyn is back to two-thirds of its pre-pandemic level, lured by the many value retailers that continue to attract customers. But at the crucial Metrotech office complex, only 20% of J.P. Morgan Chase workers are at their desks.

In Manhattan’s Garment Center, traffic has rebounded to 55% and the district’s many hotels are filling about 60% of their rooms, says the Garment District Alliance.

But people arriving into the city, especially through the Port Authority bus terminal, navigate an increased number of homeless people, some of whom were taking over two outdoor restaurant structures at night until they suddenly were removed over this past weekend.

“When people come back they look and say ‘Wow, what happened?’ said Jerry Scupp, vice president of the Garment District Alliance, on a recent walk through the business improvement district, or BID. “To those of us who have been here during the pandemic, it looks so much better.”

Labor Day was supposed to bring a return of hundreds of thousands of office workers, breathing life into the city’s hard-hit business districts. Instead, the rise in coronavirus cases coinciding with the Delta variant, and warnings from health authorities that vaccinated people can still transmit COVID, have put those districts into a state of limbo as companies postpone their return to the office for months.

At risk is the city’s fragile economic recovery and maybe even its long-term future.

“We are in a fight for survival — and don’t take survival for granted,” said Winston Fisher, owner of office buildings and a civic activist.

Last week, the Partnership for New York City reported that its most recent survey of members shows only 23% of Manhattan office workers have returned to their buildings, and that companies expect to increase that figure to only 41% by the end of September. In May the members’ expectation had been that 75% of workers would be back right after Labor Day.

The four business districts examined by THE CITY show both the progress that has been made and how much ground remains to be made up.

Hudson Square is eerily quiet on a weekday. The neighborhood is primarily home to many tech and media companies, the two sectors reportedly most reluctant to order a return to the office.

During the pandemic the business improvement district has pursued its extensive capital program to add pedestrian space and attractive street furniture, and in recent months has increased its programming for events including live music and art. Several months ago, the NYPD removed two homeless encampments in the area that had unsettled those who had returned.

The idea is to make it so that when people do visit the area, especially as part of a hybrid working experience, they will want to continue coming back.

“When they put a toe in the water we want them to enjoy the experience,” said Hudson Square BID CEO Ellen Baer.

In Flatiron, Credit Suisse has returned most of its staff to its Park Avenue building but next-door New York Life doesn’t have many people back. Large vacant storefronts  remain a jarring sight, with a 20% vacancy rate.

With few additional office workers expected, the area’s near term also depends on how many students Baruch College brings back to campus as CUNY adopts a mostly hybrid approach to its fall semester.

Downtown Brooklyn is about to get a shot in the arm with more than 6,000 NYU students expected to return to its campus there, which is primarily home to the Tandon engineering school. Retailing and hotels have kept the area more active than most, and more staff are expected back at its many government buildings in the fall.

All four business districts’ short-term future depends largely on whether companies remain deterred from requiring workers to return. But the city has to recognize what returning workers are encountering, Fisher says.

“The homeless issue has gotten worse; the city is dirty and it just looks bad,’’ he said. “In the short-term we need to be cognizant of the public perception and upgrade the vibrancy of the city.”

The BIDs clearly see that as their mission, with  the groups serving the four districts having sharply increased their programming of events ranging from children’s art projects and closed-off streets, to ping pong tournaments and music performances in parks.

Long-term, the debate continues over how the pandemic has reshaped the need for office space.

A June study by the Federal Reserve Bank of New York, based on a survey of companies in New York and New Jersey, projected that 16% of all work will be done remotely after the pandemic, about double the figure before March 2020. That figure is likely to be higher in New York City, the study said.

The real estate firm CBRE estimates an overall reduction of 9% in the need for office space in Manhattan.

“Nine percent will be a lot less dramatic than people have assumed,” said Nicole LaRusso, senior director of research and analysis. “We are optimistic that office-using employment will continue to grow.” CBRE and others predict a “flight to quality” as companies move into new or renovated buildings with modern systems and more light and air. Older buildings will have to be renovated or converted to other uses, she added.

Some companies are willing to bet huge sums on the assumption that tenants will want to upgrade. SL Green, one of the city’s largest commercial landlords, is spending more than $2 billion to construct a new office tower at 1 Madison in Flatiron with 1.4 million square feet of office space.

“I don’t think the Delta variant would change anything that tenants are doing for their 5- or 10-year long-term planning and that really is evident by the ink on their leases,” CEO Marc Holliday said last month on an earnings conference call.

He isn’t alone. Google is close to completing a new building in Hudson Square and the new headquarters for Disney continues to go up. The two companies will eventually house 5,000 additional workers.

Certainly the current state of the Manhattan office market is worrisome. CBRE’s report on the first half shows leasing this year could be the lowest in a decade, as is the absorption rate of space coming on to the market. The vacancy rate of 18.6% is the highest in a decade.

Fisher disagrees with CBRE that a 9% decline in the need for office space can be dealt with without severe repercussions, noting that is in addition to a typical vacancy rate of 8% to 10%. Adding another 10% amounts to a structural loss of more than 50 million square feet.

“Consider the losses from the commercial rent tax, payroll taxes, financings, the impact of the retail and the loss of value,” he said.