Please ensure Javascript is enabled for purposes of website accessibilityPhiladelphia district welcomes 125,000 students back to school – Capitol Hill Pulse Skip to the content 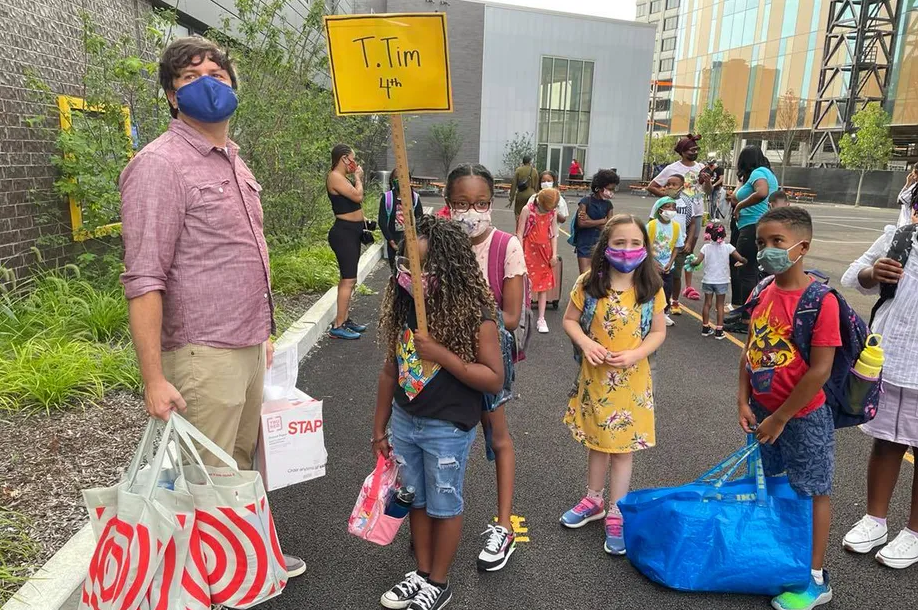 Students returned to school buildings Tuesday, many of them for the first time since March 2020, as the Philadelphia school district hopes for a full year of in-person learning, despite the highly contagious delta variant of COVID-19 surging through the city.

The University City complex was constructed at a cost of $40 million, most underwritten by philanthropic donations. Drexel University helped raise the money and will partner with the schools.

Masked students lined up, class by class, and walked with their masked teachers past a receiving line of officials to enter the buildings.

Tunisia Mercer-Bey was thrilled that her son Rashad Williamson was making a new start at a new school. Virtual learning did not go well for the eighth grader at his prior school, Mercer-Bey said.

“He said he would ask for help and never get it,” said Mercer-Bey. “He is hands-on. Hopefully in-person learning will help. I am super excited for him.”

But, she added, “I’m scared, too,” about how COVID might affect the year. “I gave him hand sanitizer, gloves and more masks,” she said.

Latania Wiggins watched her first and fifth graders enter Powel. The old Powel, several blocks away, was built in 1960. “I’m happy that it’s a new building with ventilation,” she said. “I’m still nervous.”

Right before they entered, Powel Principal Kim Ellerbee led the students in a chant that ended with “we are headed for greatness,” and “we are going to change the world.”

While optimism is high, problems abound: Contracts with teachers and principals expire Tuesday. There is no indication of an impasse in negotiations, but there also is no word on how close the two sides are to a settlement.

Neither Hite nor Kenney would give any details. “Negotiations are going on as we speak,” said Hite.

“We’re going to get it done,” said Kenney, who was endorsed by the PFT in a crowded Democratic primary when he ran for mayor.  “They know how I feel about them and how I’ve tried to treat them in the past, and hopefully there will be some residual benefit.”

He said it was likely the contract would be extended. “No one ever wins when we don’t get a contract. Certainly people have concerns about working conditions and environmental issues, we certainly have a lot of schools that need attention, and we’ll figure it all out.”

The PFT put a statement on Twitter, saying that “if the district is committed to a contract that values their educators, a fair contract can absolutely be reached today. If they are not…then we will be discussing our next steps with our membership.” A meeting is scheduled at 6 p.m. Tuesday.

The old Powel Elementary School is being readied to temporarily house students from SLA Beeber, which enrolls students in grades five through 12. SLA Beeber, located in the nearby Wynnefield neighborhood, is in the middle of an asbestos-removal construction project, and the original plan was to bring all students back, with some students using portable toilets outside.

Parents and teachers protested, and the district changed plans. The portable toilets have been removed, and ninth through 12th graders will stay at Beeber, while fifth through eighth graders will stay virtual until next week, and then be located in the old Powel building for the rest of the year.

The district and its unions are also still working on the terms of a vaccine mandate for employees, but for now parents have no way of knowing whether their child’s teacher is vaccinated against COVID-19. Weekly employee testing is planned, but students will be tested only if they show symptoms. That’s a point of contention with the Philadelphia Federation of Teachers, which wants students to be tested regularly, regardless of symptoms, especially since those under age 12 are still not eligible for the vaccine. The district is requiring all students and staff to be masked.

While the district is taking these precautions, they are not as stringent as some of the country’s other large districts. New York City has already worked on the details for its mandatory vaccinations for employees; all must have the first shot by Sept. 27, two weeks after students return to school, and show proof of a second within 45 days. In Los Angeles, every student, teacher and administrator will be tested for COVID every week for the foreseeable future.

Besides COVID worries, parents and teachers continue to complain that school buildings are not safe and press the district for more information on asbestos abatement and other construction projects that have been taking place in buildings during the extended time that they were mostly vacant.

Hite and the Board of Education have emphasized the need for a return to full-time, in-person learning as a way to help students make up for lost skills and peer socialization. With federal money, the district is devoting more resources toward helping students cope with trauma. Many have lost family members to COVID and to the gun violence that has been gripping the city.

With school starting, the district is facing a major shortage of bus drivers and bus aides, which, in part, precipitated an upheaval of bell schedules that has had some schools in turmoil. The district’s jobs board page, as of Sunday night, showed 659 vacancies for positions including climate staff, food service workers, bilingual counseling assistants, special education assistants,  assistants for early childhood classrooms, and bus attendants.

Hite said that most of the vacancies are “newly created positions” and said school operations should not be greatly affected.

Most bus drivers are hired by outside companies contracted by the district, so those vacancies are not listed. But the district cited a bus driver shortage as the main reason it revamped the bell schedule for schools, which caused disruption and protest in places where start and ending times changed by a half hour or more.

The district hired more than 600 teachers this year, and 186 teacher vacancies remain, said district spokeswoman Monica Lewis. “We are 98% filled for teacher positions,” she said via email.

Despite concerns about the return to in-person learning, just 1,534 students out of more than 125,000 in district schools chose to enroll their children in the Philadelphia Virtual Academy, which expanded this year from grades six through 12 to include kindergarten through fifth grade. And nearly 1,000 of the new students are in the early grades.

While a small fraction of the district’s total enrollment, it is far more than ever enrolled before in the virtual school, which is operated by the Chester County Intermediate Unit. It requires students to leave their old school and offers them contact with teachers, but not live instruction.

For Tim Boyle, the founding principal of Powel SLAMS, moving into this building — the third location in the five-year history of the school — is the culmination of a dream.

While some students came back for in-person learning last spring, “it is a delight to have all students back to enjoy the new building,” he said.

Ellerbee, the Powel principal, said the year of remote learning was difficult, but that students who attended regularly made progress, for the most part. She said she was grateful to be coming back and to have “a building like this to do the work we do every day.” Besides having state-of-the-art technology, it offers ample room for social distancing for her 265 students.

“We are doing all we can to keep everyone safe, to rebuild relationships, to reconnect with students,” she said. “If we don’t do these things right, we can’t do anything else this year.”

This article was originally posted on Philadelphia district welcomes 125,000 students back to school

Commercial Districts Grapple With Slowed Return to Business as Usual