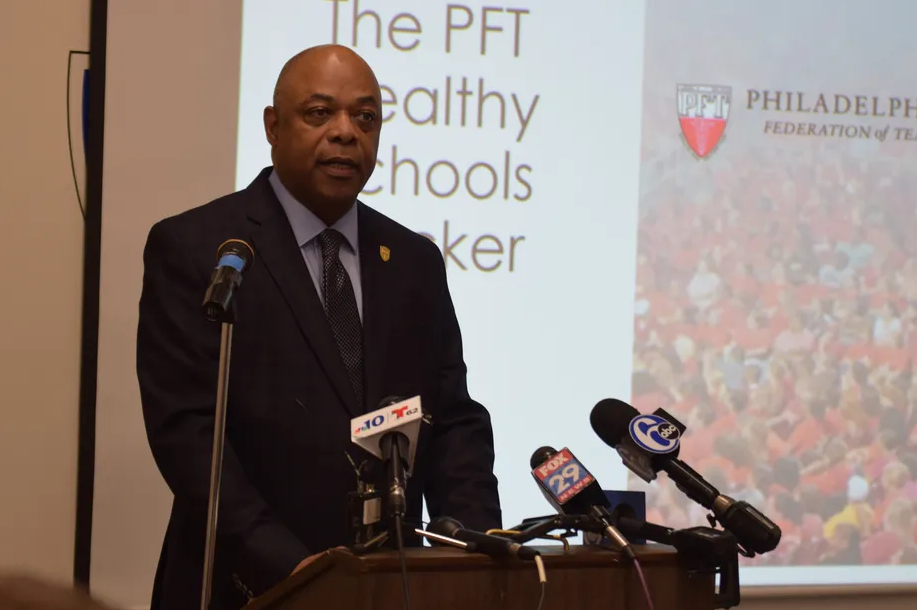 Two hours before their contract was to expire, the Philadelphia school district and its teachers union have reached reached a tentative agreement.

The union’s president Jerry Jordan informed his members at 10 p.m.: “It’s a deal I’m proud of and one I’m looking forward to bringing you tomorrow.”

Jordan said he will share details with his membership at 6 p.m. Wednesday.

The union’s one-year pact with the district expired at 11:59 p.m. Tuesday.

After tough talk during the day about a possible strike vote by membership Tuesday evening, Jordan postponed a planned press conference from 8:30 p.m. to 9 p.m. and then canceled it altogether after informing members at a virtual meeting that he was hopeful of reaching an agreement.

Earlier in the day, the union, which represents 13,000 district teachers, nurses, counselors, secretaries, and paraprofessionals, said on its Twitter account that “if the district is committed to a contract that values their educators, a fair contract can absolutely be reached today. If they are not…then we will be discussing our next steps with our membership.”

Last year, as the same Aug. 31 deadline loomed, the two sides agreed to a two-week extension to resolve outstanding issues. But they did not reach an agreement until Oct. 21, a one-year pact in which members received a 2% raise, plus step increases based on years of experience and advanced degrees.

That agreement included a safety plan to regulate conditions for a return to in-person learning, which district leaders at the time forecast would begin on Nov. 30.

The safety plan was not part of the main contract but was included in a separate “memorandum of agreement,” or MOA. As it turned out, concerns about adequate building ventilation and other COVID-related safety issues kept students learning from home until March, a full year after school buildings closed due to the pandemic. In-person learning was phased in, starting with the youngest grades and continuing with sixth to ninth grades in April. Tenth, eleventh and twelfth graders didn’t learn in school buildings last academic year. Throughout the spring, only about a quarter of eligible Philadelphia public school students chose to return in person.

Last year, in announcing the one-year extension, Jordan said that in the next round of negotiations, he would seek a four-year contract with significant raises.

This year, the PFT and its other unions are again negotiating COVID safety procedures separately, including the terms of a vaccine mandate, which the Board of Education has voted to impose.

Between 2001 and 2018, when the district operated under the control of the state-dominated School Reform Commission, the union couldn’t strike. Under the Board of Education, it regained its right to strike. (Aside from a weekend walkout in 2000, the last time Philadelphia teachers went on strike was 1981.)

While under state control, the union went five years without a contract, during which members received no raises or step increases. Once among the highest-paid teachers in the region, Philadelphia teacher salaries fell behind surrounding districts. In the current contract, salaries now range from around $45,000 a year for new teachers with a bachelor’s degree to close to $90,000 for those with doctorates and at least 11 years of experience.

The Philadelphia school district has long faced fiscal woes, but its financial picture has improved considerably with the influx of more than $1 billion in federal COVID relief money. However, that money must go toward non-recurring expenses such as personal protective equipment, facilities improvement, trauma support, and academic recovery programs. Those funds cannot be used for ongoing expenses such as salary increases.

The five-year budget plan adopted by the Board of Education in May will not start running shortfalls until 2026 under current spending and revenue projections. After that, the district will need additional funds from the state and city to maintain its current programming.

Last year, Philadelphia Mayor Jim Kenney floated the idea of a small property tax increase to help fund the schools, but the City Council did not bite. On the state level, the legislature adopted a fair funding formula in 2016 but has not applied it to most of the education aid it distributes to districts. The Board of Education has no taxing power of its own.

A landmark fair funding lawsuit, seeking to force the state to increase its education aid and change how it is disbursed, is scheduled to go to trial in October. Several school districts, civil rights groups, and individual parents originally filed the suit in 2016.

Philadelphia is not a plaintiff, but its Superintendent, William Hite, plans to testify.