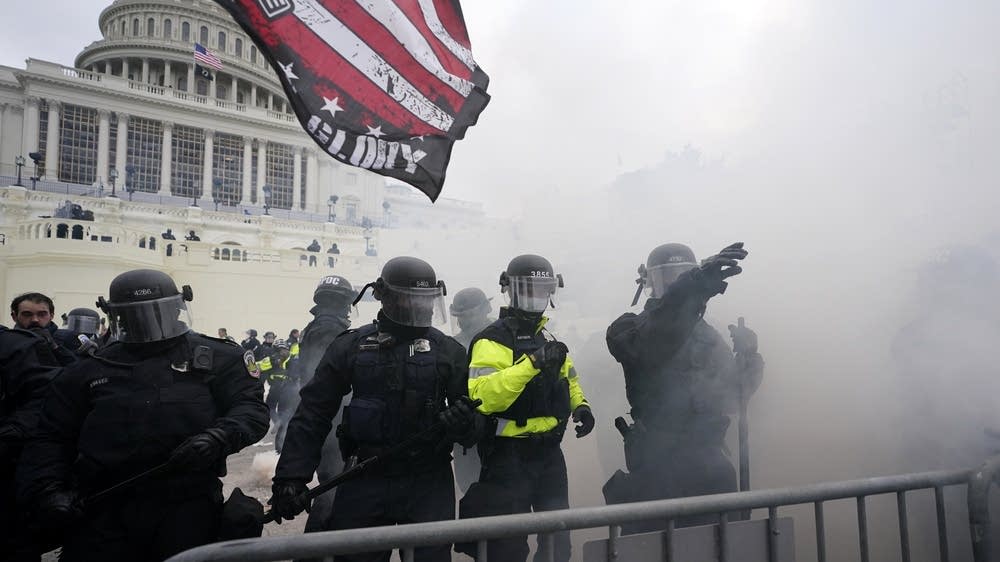 Seattle’s Office of Police Accountability recommends two officers lose their badges for their conduct on Jan. 6 during the U.S. Capitol invasion.

The OPA’s findings stem from a six-month investigation prompted by videos and images posted to social media showing two off-duty officers with the Seattle Police Department (SPD) at the scene. Four other SPD officers were put under investigation in January by the watchdog agency for attending the incident, which saw thousands of President Trump’s supporters storm the U.S. Capitol. Two people were killed in the ensuing riot and more than 120 people were injured.

Each of the officers was interviewed by OPA investigators and identified only as “Named Employee,” or “NE.” The 21-page report relies on information supplied by the FBI and U.S. Capitol police and eyewitness interviews. All six officers placed under investigation attended the event and denied any wrongdoing. Two had violated written SPD policy in committing criminal trespass, investigators found.

The officers, Named Employees #1 and #2, were captured on video obtained by the FBI at the U.S. Capitol around the time rioters breached the U.S. House chamber. The building was closed to the public due to the pandemic. The surrounding grounds were closed mid-afternoon by Capitol police.

In one interview, NE #1 said he saw “no signs of disturbance” standing some 50 yards away from the U.S. Capitol building around 2:30 p.m. EST as rioters hung from scaffolding. In another interview, he did not recognize a photo captured by a surveillance camera showing that scaffolding. NE #1 said he never stepped foot in the Capitol, claiming there was “zero indication” he was not allowed there.

NE #2 told investigators she was among the “stop the steal” election protesters gathered near the Washington Monument on Jan. 6. She did not see anyone “dressed in anything that would suggest they were preparing for nefarious acts,” speaking with the OPA. Uniformed members of violent far-right and racist groups like the Proud Boys led the mob there.

“OPA finds it unbelievable that they could think that this behavior was not illegal, contrary to their claims at their OPA interviews,” Myerberg wrote. “Not only were there signs posted in that area, but there were ongoing violent acts, the use of less-lethal tools by law enforcement officers, and multiple other signs that being in that location was inappropriate and impermissible.”

The OPA found NE #1 and NE #2 in violation of SPD policy requiring employees to “strive to be professional at all times” and bans behavior undermining “public trust in the Department, the officer, or other officers.”

Three of the four other officers were not found to violate department policies and will face no discipline. Each of them left the premise before the riot began,

Investigations into NE #3’s whereabouts were listed as inconclusive in the report. He described the violence at the Capitol “horrible and disgusting” and said some “anarchist-looking” people there prompted him to return to his hotel. He was not acquitted from possible criminal trespass, investigators noted in the report.

In the report, Myerberg wrote that while NE #1 and NE #2 had the “unfettered right to express their political views and to assemble,” their actions compromised their duties to the department.

“While they smiled and looked at the Capitol Building, as captured by the video stills, rioters defiled the seat of American democracy and assaulted numerous fellow officers,” Myerberg wrote. “That they, as SPD officers, were direct witnesses to the acts that were going on around them, including the scaling of the Capitol Building walls, but did and said nothing, compounds this.”

OPA reports are not legal judgments but serve as recommendations. SPD Police Chief Adrian Diaz vowed to fire any officer involved in the Jan. 6 invasion, though he has overturned OPA findings in the past.

Earlier this year, Divest SPD, a civic rights group, identified all six officers on social media through public records requests. The SPD has not commented on the validity of Divest SPD’s findings.

In a statement, Mayor Jenny Durkan praised the OPA’s investigation, reiterating her calls to the SPD to fire any officers who acted unlawfully. One of the officers in the OPA’s report faces a separate investigation for refusing to submit personal documentation.

The Seattle Police Officers Guild filed a grievance with the city in May to block the OPA’s report. It can appeal any criminal charges or discipline imposed on the two officers through arbitration. SPOG did not respond to The Center Square’s request for comment.

According to a statement, Diaz plans to announce what disciplinary steps to take against the two officers within 30 days.