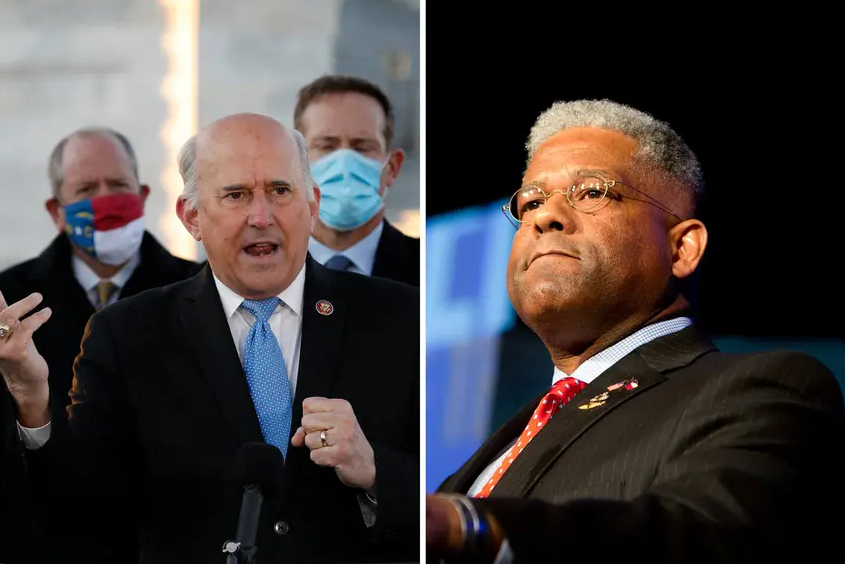 At least three prominent Texas GOP officials took part in a Dallas conference this weekend with ties to the QAnon conspiracy theory movement, where a former Trump administration official advocated for a military coup on the U.S. government.

At the conference, Flynn, who was onstage, was asked by an audience member why “what happened in [Myanmar] can’t happen here?”

Earlier this year, Myanmar’s military violently seized power from the elected government. Pro-Trump and QAnon online forums have called for a similar coup to try to reinstate Trump as president.

West said in a Newsmax interview on Tuesday he rejected Flynn’s suggestion.

“I do not support any type of military coup in the United States of America because we have a representative democracy, we have a constitutional republic, and we just need to abide by the Constitution in all that we say and do,” West said to Newsmax.

He then redirected the conversation to the Democratic walkout at the Texas Capitol over the weekend, which broke quorum and shut down movement on Republican legislation overhaul voting and elections until a special session is called.

“If you want to talk about a political coup that’s exactly what the Democrats did this past weekend,” he said. “They were elected to be representatives of the people and they could have very well have won the Texas state house in the election last year, but they did not.”

West said he did not hear Flynn’s comment initially because he was waiting to speak and chatting with friends behind the stage as it happened. He blamed “the progressive, socialist left” for taking such comments and “turn[ing] it to their benefit.”

West and the Texas GOP did not respond to requests for comment about his appearance at the QAnon-affiliated event. The event’s organizers are prominent activists in the QAnon community, per The Dallas Observer. The marketing for the weekend conference included a logo featuring a cowboy hat with the letters “WWG1WGA” around its band. The acronym is, presumably, a reference to the QAnon motto: “Where we go one, we go all.”

QAnon is an internet-driven conspiracy theory that is of concern to political leaders and law enforcement officials. Followers adhere to an unfounded theory that a cryptic government official who identifies as “Q” is exposing a plot of elitists who engage in Satan worship and child abuse. Some believers have been accused of plotting or carrying out violent crimes, including killing a New York mob boss. The FBI has identified the movement as a domestic terrorism threat.

This isn’t the first time West has been linked to QAnon. Soon after West took control of the state GOP, he branded the party with a phrase often used in the QAnon sphere: “We are the storm.” West denied any connection at the time between the party’s use of the phrase and the conspiracy theory.

Flynn is one of the most prominent figures associated with the QAnon movement. In July 2020, Flynn posted a video in which he took an oath and it included the group’s motto.

West spoke about an hour after Flynn’s coup remark, according to Texas Monthly. West then invited Flynn back onstage, and Flynn encouraged the GOP chairman to run against Gov. Greg Abbott.

Both Gohmert and Miller also delivered remarks at the event in front of the QAnon symbol.

A video on YouTube of Gohmert’s speech shows he downplayed the Capitol insurrection, suggesting FBI leadership during Trump’s administration posed a greater threat to democracy than those who stormed the building.

On Jan. 6, hundreds of people invaded the U.S. Capitol, many of whom engaged in hand-to-hand combat with U.S. Capitol and local police. Within the Capitol, rioters chanted “Hang Mike Pence” and rioters took over the U.S. Senate chamber and U.S. House Speaker Nancy Pelosi’s office. Additionally, a gallows was constructed outside of the Capitol, and inside the building Texas members of Congress prepared for street fighting but were evacuated to safety.

“It wasn’t just right-wing extremists in there,” Gohmert told the crowd.

Gohmert referenced an isolated case of a man arrested who traveled the country last year to further inflame various riots and get attention. FBI Director Christopher Wray told Congress in March that the people who breached the U.S. Capitol fell into two categories: militia groups and white supremecists.

Miller used his speech to repeat falsehoods about Trump’s election being rigged.

“There’s no doubt in my mind that Trump won that election. It was just stolen,” he said.

Miller also took some digs at Abbott, whom he is considering running against.

“Here’s what’s bothering me right now: Our current governor, who did a really good job when he was first elected, cannot win reelection in the general election,” he said about Abbott.

Miller suggested Abbott is losing support in the business community for restrictions during the COVID-19 pandemic.

“He will not get their vote. So there’s a strong chance that Beto O’Rourke or Matthew McConaughey will be the next governor of Texas, so we’ve got to get somebody in there that can win.”

Despite an onslaught of evidence clearly demonstrating the lack of validity in the conspiracy theory, QAnon continues to grow as a major sector in Republican politics.

In a recent poll commissioned by the Public Religion Research Institute, 15% of Americans said they agreed with the false core tenet of QAnon movement, stating they believed “the government, media and financial worlds in the U.S. are controlled by a group of Satan worshipping pedolphiles who run a global child sex trafficking operation.”

Many of the most prominent people arrested for the Jan. 6 insurrection were QAnon supporters.