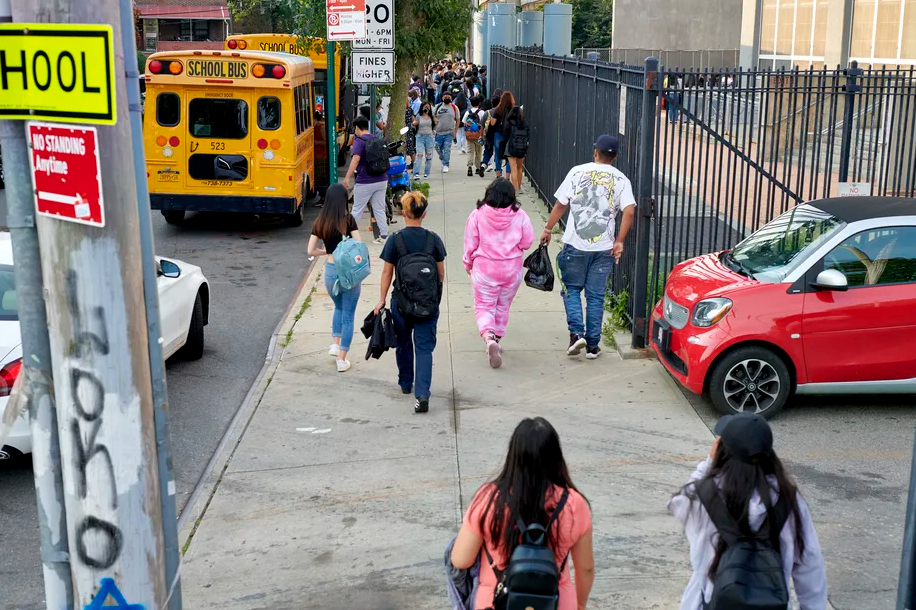 On a typical day, principals can log into an education department system to request a substitute teacher when needed.

But this coming Monday will not be business as usual. It’s the first day the city’s vaccine mandate takes effect for all adults working in school buildings, and some schools are worried about staffing shortages.

Mayor Bill de Blasio has insisted that “thousands and thousands” of vaccinated substitutes will be ready to fill in for unvaccinated teachers and other staffers. But some schools have already struggled for weeks to find substitutes. Educators at those schools said they may end up reshuffling current classes or staff to cover vacancies if they’re still unable to get substitutes.

To cover current teacher absences, school leaders at one Brooklyn elementary school have been pulling educators from Integrated Co-Teaching classes, or ICT, which require one special education and one general education teacher.

At another elementary school in the Bronx with two vacancies, only one substitute has been available to cover, a teacher said. Additionally, the school is expecting between three to five paraprofessionals, or classroom aides, to be out on Monday because they won’t get vaccinated, which accounts for at least one quarter of their paraprofessional staff.

This school had a challenge to find substitutes pre-pandemic, in part because of its Bronx location, the teacher said. He doesn’t expect that to change by next week.

“There has been no contingency plan,” said the teacher, who, like others in this article, asked to remain anonymous for fear of reprisal. “It’s just something mentally I’m preparing myself for — who knows what’s going to happen on Monday?”

New York City’s vaccine mandate was originally set to go into effect on Sept. 27, two weeks after the first day of school. Legal disputes unsuccessfully challenged the mandate, including from the city and state unions. A federal judge ordered a delay for implementing the mandate, but this week that court cleared the way.

The ruling came in time for schools to implement the mandate on Sept. 27, as originally scheduled. De Blasio instead chose to delay until end of day Friday, meaning educators will have to show proof of at least one dose of vaccine by then. City officials wanted schools to have the weekend to staff up with necessary substitutes, de Blasio told reporters earlier this week.

On Monday morning, unvaccinated staff will not be allowed to work and must take unpaid leave.

Mark Cannizzaro, president of the union for principals and administrators, which had joined a legal fight opposing the vaccine mandate, had previously called for a delay, along with the city teachers union.

“The fact that the mandate was delayed for this week, I think, has been helpful in many people being able to secure some staff,” Cannizzaro said. “However, there are still many schools that are having difficulty finding people.”

In anticipation of staffing shortages, education department officials told schools last week that they would receive extra funding to hire substitutes, who are paid $199.27 without benefits, though long-term hires may qualify for sick leave. Katie O’Hanlon, a spokesperson for the education department, said superintendents and borough offices are working with schools that need extra support.

Over the past week, the percentage of teachers and school leaders who have submitted proof of at least one dose has steadily climbed. Roughly 89% of all education department employees complied with the vaccine mandate, including 92% of whom were teachers, according to city officials. 98% of city principals and 95% of assistant principals had been jabbed, according to Thursday data from the principals union.

That leaves just over 16,200 education department staff, including about 6,200 teachers, unvaccinated. Schools are also bracing for shortages of cafeteria workers and school safety agents.

In the event a principal cannot report to work Monday, a superintendent would either make an assistant principal or another type of administrator the interim acting principal, according to Craig DiFalco, a spokesperson for the principals union.

In addition to substitutes, the city has promised to send central education department staffers into schools if necessary.

Some schools appear more ready than others. A Bronx elementary school principal said the only two holdouts at her school are expected to get their first dose on Friday. Many of her teachers are “politically active” and believe it’s their responsibility to get vaccinated, but others simply need the money and must stay employed, she said.

“Most people don’t have the financial ability to [quit],” she said. “Everyone I know, they need this job to survive.”

But staff shortages could particularly be a problem in specific pockets of the city. Staten Island schools seem to have higher numbers of unvaccinated staffers, said Cannizzaro, based on feedback he’s heard from school leaders there. With 66% of all residents receiving at least one dose, Staten Island ranks third for its vaccination rate, ahead of Brooklyn and the Bronx, respectively, city data show.

Schools already experiencing shortages could be for a few different reasons. Sometimes schools want someone who is qualified or has experience teaching a particular subject area, such as a foreign language, Cannizzaro said. Other times, it’s hard to find a substitute who wants to stay long-term, which is what many schools may be looking for once the mandate kicks in. For example, teacher retirees who now work as substitutes are usually only looking to work a couple days of the week, he said.

Students with disabilities caught in middle

At the Bronx elementary school, losing even three paraprofessionals could mean a cut in services for several students with disabilities who are mandated to receive one-on-one help from such staffers.

Though a chunk of unvaccinated staffers from that school got their first dose last week, the school dealt with nearly a dozen staff absences this week, potentially from those dealing with temporary after-effects of the vaccines, a teacher said. School leaders mostly reassigned one of two teachers from ICT, even though those classes are required to have both under state education regulations.

The teacher expects that could happen next week when the mandate kicks in. The school often does not hire substitutes to fill absences because they either cannot find long-term substitutes or people who they feel are qualified, according to a teacher there.

It wouldn’t be surprising if, come Monday, the school combines entire classes to deal with staffing shortages, which can have a “destabilizing” effect on kids, the teacher said.

“Especially this early in the year, they need to settle in and feel centered on what’s going on and feel comfortable enough to begin learning,” she said. “But if there is a different teacher in your room every day, or they’re gone, and no one explains it to you, kids have trouble relaxing or focusing on the work.”

A teacher at a Brooklyn high school recounted struggles to find reliable substitutes in the past. One time, a sub walked out in the middle of the day. Sometimes subs haven’t shown up, and some of the temporary hires weren’t “great with the kids,” he said. For those reasons, the school is wary about who it brings in.

He believes the school will lose at least one teacher once the mandate goes into effect and potentially two to three others. As of Wednesday, the school had two potential leads for subs, but he’s unsure what’s going to happen next week.

“I am assuming one of the possible scenarios is that us as teachers will have a little bit more workload,” he said. “Some teachers might be asked to teach an extra period.”

This article was originally posted on De Blasio insists substitutes will fill staff gaps caused by vaccine refusal. Some schools have doubts.