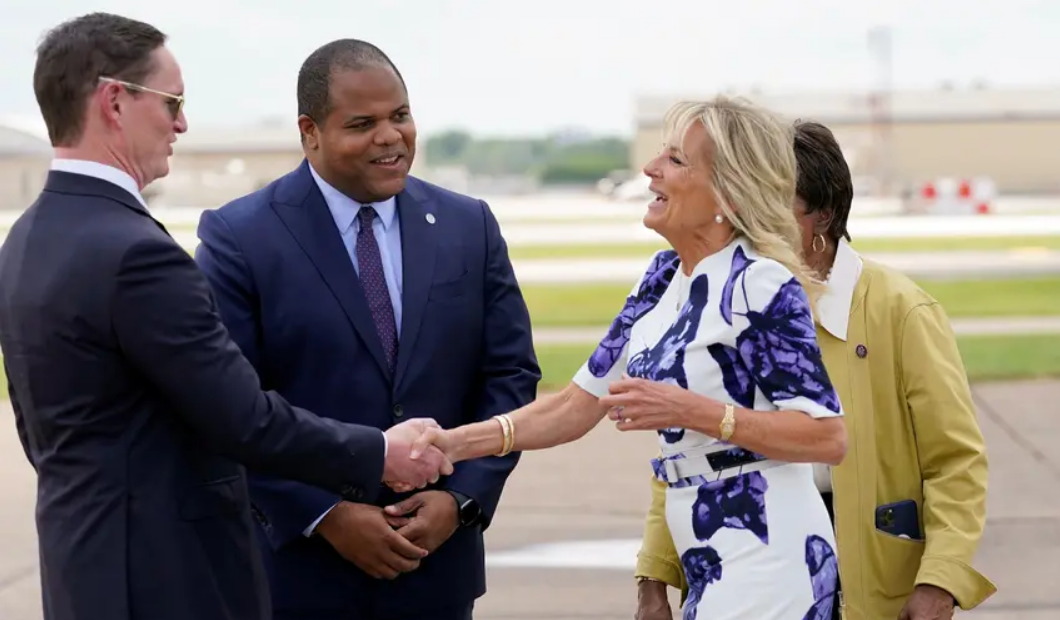 “We’re not done yet,” she said at Emmett J. Conrad High School. “Right now, only 40% of Texans are fully vaccinated and like Emmitt said, it’s not enough.

“And your lives matter to me and your president.”

About 41% of Texans are fully vaccinated, while the number of hospitalizations and the weekly average of new cases are on the decline in the state. Health officials say 75% to 90% of Texans would need to be vaccinated to achieve herd immunity. Nationwide, about 66% of adults have at least one dose of the vaccine, according to the U.S. Centers for Disease Control and Prevention.

“We all carry each other through the darkest times,” Biden said. . “That is what we do as Americans…So, God bless you, Dallas, and go get vaccinated.”

Biden later traveled to Houston for Tuesday evening, where she was joined by Second Gentleman Douglas Emhoff. The two visited a Houston Astros-sponsored vaccination site and then attended an Astros game at Minute Maid Park, sitting with military members and frontline workers. The pair could be seen clinking their beer in plastic cups.

While there, the first lady pointed to Texas’ low vaccine rate as part of the impetus for coming to the state.

“Because the numbers are low here,” she said when asked why she came to Texas. “I think 40% of all Texans are vaccinated, so that’s, you know, the president and the vice president, Doug and I care about the American people about their health. So that’s why I’m here.”

Earlier in the day, Department of Homeland Security Secretary Alejandro Mayorkas traveled to San Antonio to tour a vaccination site there. President Joe Biden will travel to Michigan over the weekend.

“In the sports sense we’re in the fourth quarter, and the game is not finished,” Smith told the group in that area.

“We’re going to get a touchdown,” Jill Biden added.

A Republican National Committee spokesman knocked the Biden administration for not reaching its vaccination goal even as the president is widely credited with scaling up the vaccine distribution once he assumed office earlier this year.

“Texans should remember that Joe Biden’s goal of partially vaccinating 70% of adult Americans by July 4th is nowhere close to being reached,” said Republican National Committee spokesman Michael Joyce. “Without President Trump and Republicans’ Operation Warp Speed, we’d be even further behind than we are now.

Coloradans received over $6 billion in third round of economic impact payments, feds say

No aliens, but government transparency and desire for better data might bring science to the UFO world