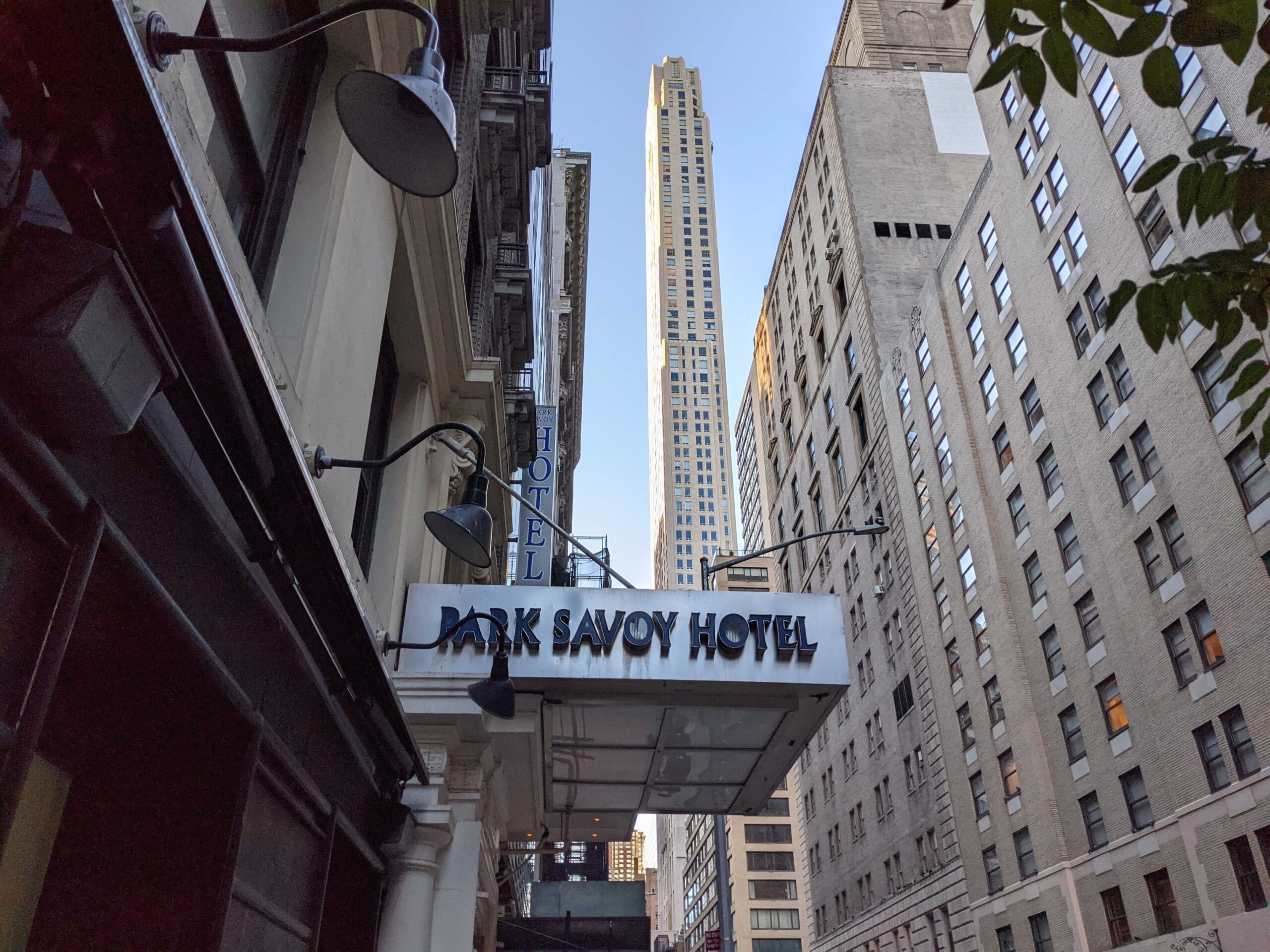 After four years and several court battles, a residence for 140 homeless men quietly opened, steps from some of the priciest real estate in Manhattan.

The West 58th Street shelter is located in the former Park Savoy Hotel, next door to an entrance of the 1,000-foot-high One57, one of several supertall buildings on so-called Billionaires’ Row.

The shelter opened Friday, the Department of Homeless Services said, more than four years after the city first submitted plans to the state in August 2017 — and more than three years after neighbors sued to block the facility. Foes claimed the building was unsafe, but New York’s highest court ruled against the group in May.

DHS Commissioner Steve Banks said, to his knowledge, it was “the longest and the most well-funded litigation” against a shelter in the five boroughs.

“Not every shelter opening results in a court challenge, but where there have been court challenges, we’ve prevailed in every one,” he told THE CITY.

Just five men have moved in this week, and a few will be moving in each week until the shelter is full, officials said.

All Quiet on West 58th

The block was quiet on Monday afternoon, three days after the facility, run by shelter operator Westhab, officially welcomed its first residents.

All that indicated the new addition to the neighborhood was a small white sheet of paper taped in the front window that read “Welcome to the Park Savoy rapid re-housing program.”

The West 58th Street Coalition, the group that waged the long legal fight against the shelter, spent at least $287,000 to hire lobbyists to help their cause, city lobbying records show.

Opponents also spent at least $100,000 on billboards in Iowa protesting Mayor Bill de Blasio as he traveled in the state during his short-lived 2019 presidential campaign.

The legal team for the West 58th Street group included Guiliani-era deputy mayor Randy Mastro, who lobbied the governor’s office and other state officials to not grant the shelter necessary approvals to open, THE CITY previously reported.

Mastro also represented a group of Upper West Side residents who had sued the city to remove homeless men from the Lucerne Hotel on West 79th Street, which had turned into an emergency shelter in the early days of the COVID-19 pandemic.

Across the street from the shelter, Robin Siskin, a West 58th Street resident of 30 years, said she gave $25 to the legal fund for the Coalition and was surprised to hear the shelter had opened.

The last she had heard about it was in a Nov. 4 email she’d received from the West 58th Street Coalition that said the group had planned a breakfast meeting with mayor-elect Eric Adams on Nov. 15.

Adams’ spokesperson did not immediately respond to an inquiry from THE CITY about a meeting with the group.

Inquiries to Michael Fischer, leader of the West 58th Street Coalition, were not returned Monday.

Looking to Be ‘A Good Neighbor’

Catherine Trapani, executive director of the advocacy group Homeless Services United, of which Westhab is a member, said she is glad the “space will get to be used by people who need it.” She reflected “how shameful it is” that the building went unused for four years.

“We went through an entire pandemic, and record high [numbers] of single adults in the shelter system, and this sat empty,” she said of the West 58th Street building.

Jim Coughlin, Westhab’s chief operating officer, said the group is looking forward to “being a good neighbor and working collaboratively with local residents and businesses” as well as giving job training and housing placement services “for every individual that comes through our doors.”

Banks said, in his experience at the homeless services agency and before that as an attorney for the Legal Aid Society for many years, neighbors of homeless shelters typically have “lots of concerns” ahead of an opening, but those “melt away” after residents actually move in.

“I would urge everyone to focus on the human beings who need a roof over their head, and to help us support them,” he said.

‘Need a Place to Go’

The West 58th Street residence is opening as the city completes a major shift to move thousands of people from commercial hotels — opened mostly in Midtown as emergency housing at the height of the pandemic — back to more traditional, “congregate” shelters where residents sleep multiple people to a room.

The latest of those moves took place at the end of September, a spokesperson for DHS said. There are only two remaining hotels in use as COVID-19 shelters citywide, one in Manhattan and one in Queens, both used on an emergency basis for quarantine and isolation.

No commercial hotels from the pandemic emergency batch are currently operating as shelters in Manhattan Community District 5, which encompasses Midtown and the West 58th Street location.

Overall, the total number of people in the city’s shelter system has dropped since the height of the pandemic, from over 60,000 in April 2020 to just over 46,000 now, shelter census data shows. The shelter population previously peaked at about 61,000 in January 2019.

The majority of the shelter population are families, according to the Coalition for the Homeless, and nearly 1 out of 10 public school children live in unstable or temporary housing.

Still, single adult men make up about a third of the shelter system, many of whom are formerly incarcerated and have unique challenges to finding a place to live, Trapani said. Their numbers have returned to 2019 levels — with 16,863 in DHS shelter beds on Friday night — after a pandemic high of more than 18,500.

“This is the population that needs us the most right now,” Trapani said. “Of course, we want permanent housing solutions, and we’re going to continue to work towards that, but in the meantime, these guys need a place to go.”