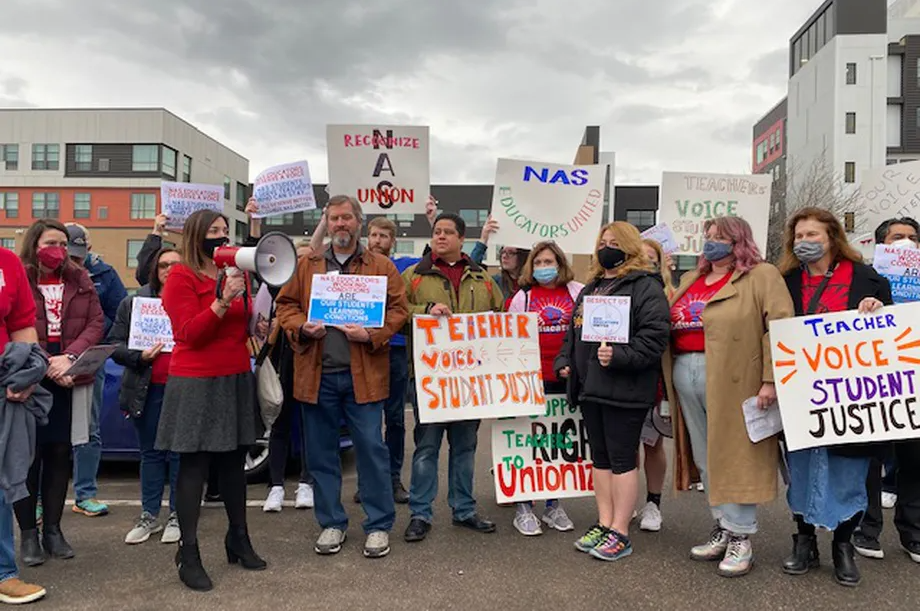 The board of the New America School network rejected a petition from teachers seeking to form Colorado’s first charter school union, a move that angered some teachers who pledged to keep fighting for recognition.

Teachers at the network, which consists of three schools in Lakewood, Thornton, and Aurora, first sought recognition for their union in November. New America School was founded in 2004 by now-Gov. Jared Polis to serve the needs of recent immigrants.

On Wednesday, the network’s governing board voted unanimously not to recognize the union but to instead develop a collaborative policy that allows teachers, other staff, parents, and students a formalized way to provide feedback.

“The board wishes to be more purposeful in how it receives feedback from stakeholders to improve the working and learning environment at NAS but does not believe a union contract is necessary to better those conditions,” the adopted resolution states.

The board plans to take up a formal proposal for a collaborative committee at its May meeting. In a press release, union members said they were furious at the decision and would keep working for recognition.

“Our union would ensure that we have a strong voice in critical school and classroom decision-making to more effectively teach and empower our hardworking immigrant students,” teacher Audrey Immonen said. “This is a slap in the face to all of us who are dedicated to our students and community.”

New America School has struggled with high teacher turnover and low student enrollment in recent years. Union supporters say a recognized teacher union could play a constructive role in solving those problems. Ten Democratic state legislators signed a letter urging the board to recognize the union.

But board members expressed concerns about the consequences of recognizing a union when the school faces significant financial challenges related to declining enrollment. They also noted that each of the network’s three schools has its own charter with different authorizers and different requirements.

Under Colorado law, public schools can choose to recognize employee unions but they don’t have to. Several dozen Colorado school districts have collective bargaining agreements with teachers and other employee unions. Charter unions are increasingly common in other states, in particular California and Illinois, but so far no Colorado charter school has unionized.

Democrats had pledged to introduce legislation this session that would guarantee collective bargaining rights to public sector employees, but with stiff opposition from school districts and Polis, K-12 employees almost certainly won’t be included even if the bill is introduced.

Federal labor regulators have ruled charter schools to be private sector employers — who do have to recognize employee unions that meet certain conditions — in some circumstances, but teachers at New America Schools haven’t explored that option.