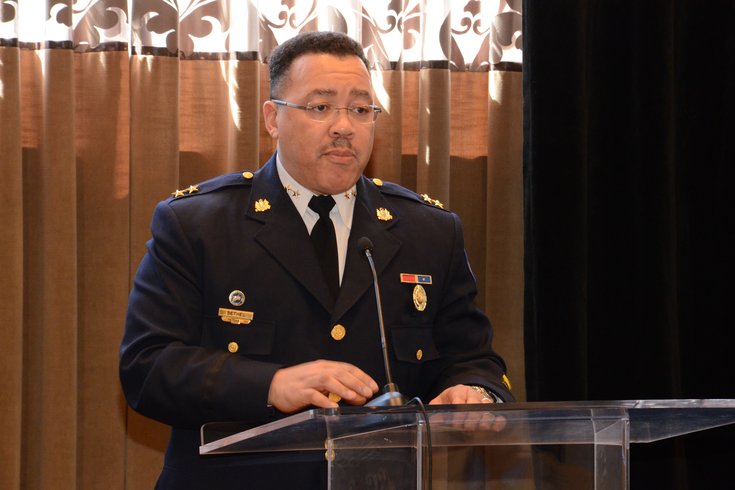 Philadelphia officials outline steps to stem violence in and around schools

Amid a troubling wave of gun violence impacting the lives of Philadelphia students, the district’s director of school safety declared Thursday that city leaders are mobilizing resources and cementing collaborations to keep children out of harm’s way.

“Our schools are a safe place,” said Kevin Bethel, a former deputy police commissioner who spent 30 years with the department before joining the district two years ago.  “They’ve always been a safe place. They continue to be one of the safest places in the city of Philadelphia regardless of the incidents we’ve had recently. Our schools are safe.”

Bethel’s declaration came during a press conference where he and Superintendent William Hite announced that, as part of their strategy to keep students safe, the district plans to pay community members to help patrol areas around school buildings during arrival and dismissal.

The Board of Education voted unanimously in favor Thursday evening to accept a $225,000 grant from the Pennsylvania Commission on Crime and Delinquency to establish a “safe path” program at four high schools — Motivation, Sayre, Lincoln and Roxborough. The district is in the process of preparing “request for proposals” from community groups, and Bethel said he hoped that program would be well established by the end of the school year.

The new program was introduced after a series of shooting incidents in and around Philadelphia schools, including a student who shot himself in the leg inside a building Friday. The week before, a 13-year-old was killed a few blocks from his North Philadelphia school at 9 a.m. and a student was critically wounded and a passing motorist killed by a stray bullet during a gunfight outside Lincoln High School.

The violence comes amid an increase in shootings citywide, with Philadelphia on pace to exceed the all-time record for gun deaths in one year.  The city surpassed 400 gun deaths at the end of September.  The record for one year is 499.

In this latest plan to keep children safe, Bethel said members of the community groups would be “paid a small stipend” to aid police. These are the people “who know the communities, who know the kids, and can support us in this work,” he said. Among the groups that will be involved is the Philadelphia Anti-Drug, Anti-Violence Network.

The approach is based on a program in Chicago, he said, although that city, with a district nearly three times the size of Philadelphia’s, has devoted $30 million to the effort.

Bethel said that he had also secured other grants totalling $750,000 to support similar collaborations beyond the four schools. “It is unrealistic to expect to replicate Chicago’s 1,500 ambassadors,” he said. “We have to be very strategic, data driven, with the flexibility” to move people around based on need.

The board also was scheduled to vote to accept grants and allocate $1 million to create “safe paths” near some non-public schools.

The “safe paths” program is in addition to a police department initiative announced last week that would increase police presence in and around schools in 25 zones, encompassing 38 schools, that are deemed among the most unsafe in the city.

Hite said that he, Bethel, and Board of Education president Joyce Wilkerson met Wednesday with the District Attorney Larry Krasner and people in his office, along with other city and police officials. The meeting was “to ensure that we acknowledge that schools are sacred places for our young people and we will not tolerate any behavior that is creating the types of things that our young people have been experiencing over the past several months,” Hite said.

“We now have our children going to school and our parents and our school leaders [are] scared. That’s just not acceptable,” Bethel said.

Last week, a group of principals, brought together by their union, called on the district to put more resources in schools and help them combat the trauma and violence their students are experiencing.

Bethel’s comments addressed the seriousness of the moment. At the height of the pandemic, he said, “There was a push and a cry to get our kids back in school so they’d be safe. And so the reality is we all, our elected leaders, our school leaders, our community leaders, our parents, all of us, have the duty and responsibility to make our schools safe.

“I love these kids, I love this city. I took this job because I wanted to protect my kids. I never thought I’d be protecting them from gunfire.”

Bethel has long been interested in reforming how police and the legal system deal with juvenile offenders. Before joining the district, as a deputy police commissioner he spearheaded a program that rewrote the rules for when officers were called into schools and reduced the number of student arrests from more than 1,500 a year to less than 300.

Bethel said Thursday that school safety officers are now trained in de-escalation tactics and to serve as mentors. He reiterated his support for keeping school police unarmed; now, they carry only handcuffs. Most high schools have metal detectors, but students sometimes are able to bring weapons into school buildings through other means. “Some of our schools have 70 doors,” he said.

On Friday, a student in Philadelphia Learning Academy South accidentally shot himself in a school auditorium. The police and district are still investigating how the student was able to get the gun into the building, which houses three alternative programs for students who are in danger of not graduating, some of whom are returning from juvenile detention.

Last year, in the wake of the police killing of George Floyd and other incidents, student groups and others mobilized to demand that school police be disbanded and replaced with mental and behavioral health counselors.

At the press conference, Bethel made an impassioned plea that it is time to do something about the easy availability of guns.

“I took this job because I wanted to protect my kids. I never thought I’d be protecting them from gunfire,” he said. “At some point we have to reach a decision, how much more will we take before we make some demonstrative steps to stop these guns going through our community and getting into the hands of our children.”