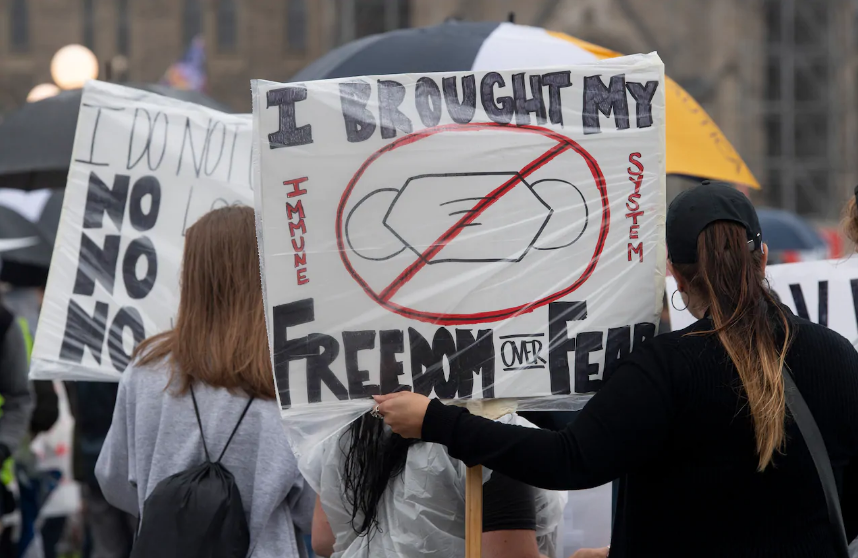 When politicians fail to adhere to public health directives, it can decrease confidence in a government’s capacity to manage a crisis like the COVID-19 pandemic. This phenomenon was identified in the United Kingdom as the Cummings Effect after a politician who flouted COVID-19 regulations, and our research shows it is also at play in Canada. It’s particularly relevant right now as Canadians contemplate whose COVID-19 performance they have the most confidence in heading towards the Sept. 20 election.

In early 2021, Canadians were outraged by a scandal, dubbed “alohagate” in Alberta, that involved 16 politicians travelling abroad at the height of the pandemic. This was despite public health messages to “flatten the curve” by avoiding holiday travel — even family dinners — and in violation of federal restrictions against non-essential international travel.

While the greatest number of politicians who travelled were from Alberta, members from other provinces also went on trips. Canadian fury over their behaviour made international news. While fear of spreading COVID-19 was a concern, the main frustration was the double standard of political leaders failing to make the same personal sacrifices they were demanding of their constituents.

Canadian outrage was exacerbated by the pre-recorded holiday solidarity messages of several politicians.

These messages of “we’re all in this together” were broadcast nationally while in reality, politicians were enjoying tropical vacations. When the news emerged, Canadians felt betrayed. Their outrage deepened when one political leader — Jason Kenney, premier of Alberta — initially offered excuses for his colleagues. He was the only political party leader who didn’t immediately sanction those who’d travelled.

Just a few months before, in the spring of 2020, a similar situation occurred in the U.K. and the Cummings Effect was born. It’s in reference to Dominic Cummings, then the chief adviser to Prime Minister Boris Johnson.

Cummings and his wife — both exhibiting symptoms of COVID-19 — travelled 250 kilometres north of London in May 2020, breaking federal lockdown guidance. Cummings tried to disguise where he was and Johnson initially offered excuses for Cummings. The British public was furious, and the result was a dramatic decrease in confidence in the Johnson government’s handling of the pandemic.

Using consistent questions, we probed Albertans’ trust in various leaders’ ability to handle the COVID-19 pandemic, comparing federal and provincial political party leaders and chief medical officers of health. We found that trust in health officers remained higher than trust in politicians, and trust in all political leaders decreased over time. But trust in Kenney decreased the most, by almost 10 per cent, with minor erosion of trust in Alberta’s chief medical officer.

Looking into the likelihood that someone would be irritated by the travel behaviour of politicians, we used a statistical test to determine that gender and age made no difference: women and men were both more likely to report “lower confidence.”

Even older people who might be considered Kenney voters were more likely to report lower confidence in early 2021, when news of the holiday travel broke. There were some differences between urban and rural dwellers, but in general, people lost confidence after the 2020 the holiday season.

To help confirm the loss in confidence was related to the holiday travel scandal, we used Google Trends data to search for interest in the names of the politicians who were caught travelling. We indeed found dramatic and unusual interest in those specific individuals, spiking in the early days of January 2021, when the scandal was peaking.

Why is this relevant to public health? Because human beings are social animals; our individual behaviours are affected by the things we see others in our group doing. Sociologists describe this as the theory of social norms: the more common a behaviour, the more easily it is accepted.

What this means for people designing public health messages is that in addition to the content of the message (it should be accurate, clear, simple) and its style (it should be in the language and medium used by the intended audience), the messengers themselves have a big impact.

The pandemic is a health and economic crisis. Canadians have been receiving highly expert advice. But we live in an era of generalized distrust in politicians and in a society that promotes personal responsibility for individual health. So does the public really notice whether politicians follow the same standards as the rest of us, rather than their own personal standards?

Holding politicians to a high standard

Our analysis of the change in confidence after the holiday travel scandals shows that those who believe politicians need to be held to a higher standard — including those on both the left and right of the political spectrum — are more likely to report “low confidence” in public officials during the COVID-19 crisis.

The conclusions we draw from the research are twofold.

First, the Cummings Effect is something public servants should guard against. Our research shows a similar pattern of trust loss in governments after a political figure fails to model best behaviours.

Second, when a messenger loses the trust of the audience, the impact can be severe, not only for the public health response but, in the case of politicians, for their political careers as well.