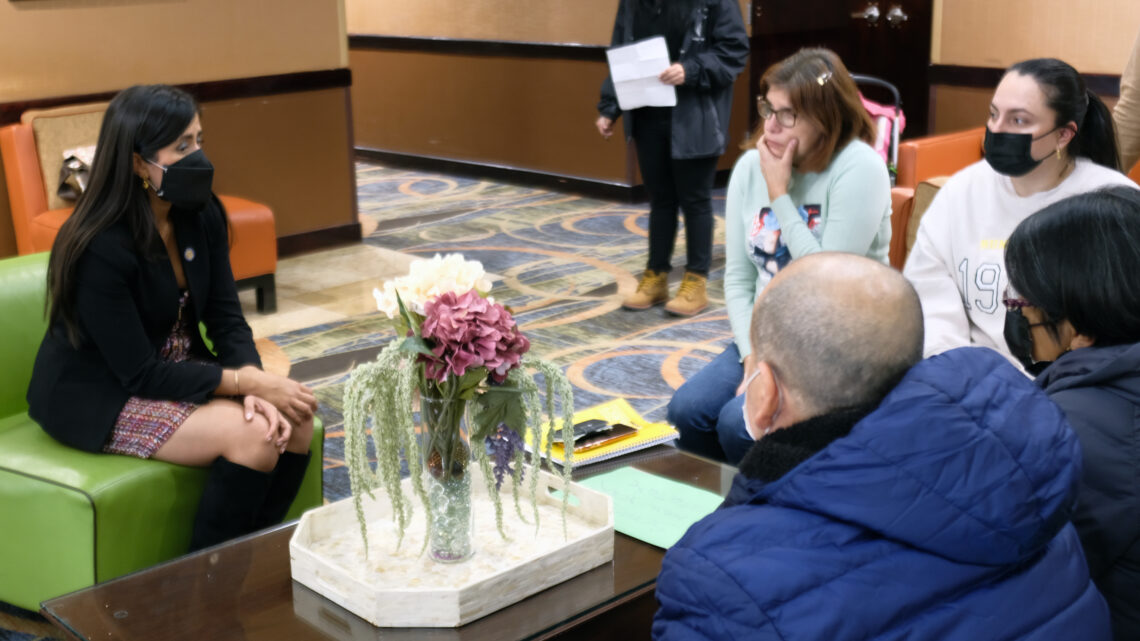 Families flooded out of Queens homes by the record-breaking Ida rainstorm may soon be forced by the city to relocate from a Radisson hotel near Kennedy Airport and move a borough away.

The looming trip to one of two hotels in downtown Brooklyn could take place before Thanksgiving, the Ida evacuees say they’ve been told by the city Department of Housing Preservation and Development.

“We just want more time,” Eileen Bendoyro, 52, said Tuesday after being informed she and her 13-year-old son Christopher would have to move to Brooklyn after staying at the South Jamaica Radisson since the epic Sept. 1 storm.

“Our activities are in Queens. We have small kids, babies, people who are disabled — to go to Brooklyn, it’s too far,” she said of the group still at the airport hotel.

Bendoyro’s basement apartment in East Elmhurst flooded, destroying nearly everything, she said. A week later, President Joe Biden and other elected officials visited the neighborhood, stopping at an alleyway around the corner from her apartment.

But the visit didn’t help her find a place to stay. She was among 20 families still at the hotel on Thursday when HPD told them they’d have to move by Monday, she said.

By Tuesday, just nine families remained, and they were then told by city officials they could get an extra five days at the Radisson.

An HPD spokesman said the city has provided emergency quarters to more than 380 families since the remnants of Hurricane Ida hit and is working to get people into permanent housing.

“We’ve secured extended stays in hotels in downtown Brooklyn for many of those who remain in our care, and will continue to work with the families staying at hotels in Queens to get them back on their feet,” the spokesman, Anthony Proia, said in a statement.

State Sen. Jessica Ramos, who represents East Elmhurst and other Queens neighborhoods, said the short-term goal is to keep the families at the Radisson but then to eventually move them to hotels near LaGuardia Airport, which is closer to home.

But ultimately, she added, they need permanent housing.

“We need to help them find apartments,” she said. “The city has no plan to take care of people after a disaster.”

Ida dumped nearly six inches of rain on New York City in a short amount of time, a record amount of rainfall. The storm killed 13 people, 11 of whom died in basements, most of them in Queens.

After the storm, Mayor Bill de Blasio vowed to take action, including plans to develop a warning system for people living in vulnerable basement quarters.

The dead included a 2-year-old boy, who drowned with his parents inside their basement apartment in the house on the corner of 64th Street and Laurel Hill Boulevard in Woodside.

Choi Wong and eight of her relatives also lived in parts of the home, including a room in the basement. She and her husband watched as the water in their portion of the basement went from 6 inches to more than 6 feet in just a few minutes, nearly killing them.

They couldn’t save their neighbors, and Wong said the experience was traumatic. The aftermath has been “dehumanizing and demoralizing,” she said.

She and her family — including four adult children, a 4-year-old granddaughter, her husband and her ex-husband, whom she has taken care of since 2012 — have lived in four rooms at the Radisson Hotel since Sept. 2. There is still a vacate order on the building she and other tenants called home.

“New York is such expensive rent, we cannot afford to go anywhere else,” she said.

Builders FirstSource to bring more than 100 jobs to South Carolina