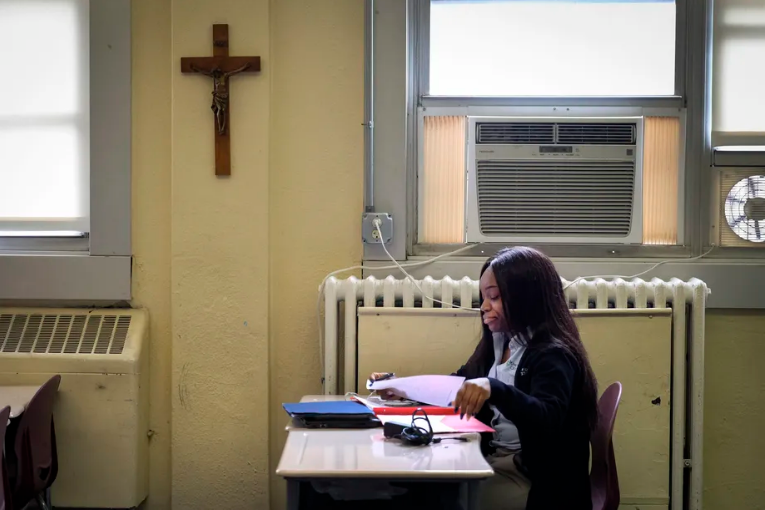 Supporters of school choice are battling on two fronts to open the door to school vouchers in Michigan. They’ve taken their fight to both the courts and the state Legislature in a renewed push.

First, they’ve asked a federal court to strike down a provision in Michigan’s constitution that prohibits spending public funds on private school tuition.

Second, they crafted legislation providing tax credits for scholarships for private school tuition, or for tutoring and other services that supplement public education. On votes that followed party lines, the House and Senate this week passed separate bills, which Gov. Gretchen Whitmer threatened to veto. Each bill still has to be approved by the opposite chamber. Votes could be taken next week.

With a Republican state Legislature, a conservative U.S. Supreme Court, and a pandemic that has highlighted the need for educational options, proponents of school choice believe the time is right to advance their agenda.

“There is a moment of opportunity here to make a case that Michigan students and families deserve the same kind of range of education opportunities that other states are offering,” said Ben DeGrow, director of education policy for the Mackinac Center for Public Policy.

The center has asked a federal court to strike down a provision in the state constitution that prohibits tax incentives for private and religious school tuition.

At issue are provisions in the legislation allowing funds from tax-free scholarship programs to go toward tuition for private or religious schools. Eligible private school students could receive up to $7,830 per year or 90% of the foundation allowance for public school students.

“The shutdown and disruption of many public schools since the spring of 2020 shows just how important it is that families across Michigan can have the flexibility of using their education funds to provide their children with the best opportunity to succeed,” DeGrow said.

Democrats and advocates for public schools say people don’t want public funds to go to private schools. They point to a 2000 failed ballot initiative that would have enshrined a right to vouchers in the Michigan constitution. Sixty-nine percent of voters opposed.

That ballot measure was heavily backed by Betsy DeVos, the Trump administration’s education secretary, and her husband, Dick DeVos. They are longtime leaders of the school choice movement who have financed pro-voucher candidates across the country. They have also been among Mackinac Center’s major financial backers.

“This proposal is even more expensive and more detrimental to our public schools and the families that attend them,” said Don Wotruba, executive director of the Michigan Association of School Boards.

DeGrow’s conservative research institute has been pressing for school choice for years. Its legal foundation is representing five families suing the state over restrictions on the Michigan Education Savings Program. The families want to use money in the tax-free savings program to pay for private school tuition, but the state constitution prohibits direct and indirect aid to nonpublic schools.

That prohibition, both sides agree, would also apply to the bills passed this week, rendering parts of them unconstitutional without court intervention. The Mackinac Center is prepared for a protracted legal battle.

Degrow said portions of the legislation that don’t pertain to private schools could be implemented meanwhile.

The biggest obstacle is Michigan’s 1970 constitutional amendment which prohibits public funding of private schools. Courts have already struck down similar restrictions in 31 of the other 37 states that have them. Such provisions in state constitutions have become known as Blaine amendments, named after Maine lawmaker James Gillespie Blaine, who pressed for restrictions on public spending on religious institutions in the 1870s.

Last year in a 5-4 decision, the U.S. Supreme Court declared unconstitutional Montana’s prohibition on using a state education program for private school tuition. The program is similar to the one the Michigan House and Senate approved this week in separate bills.

The court’s rationale was that Montana was violating First Amendment religious freedoms by restricting payments to parochial schools.

The Michigan Supreme Court, which comprises four Democrats and three Republicans,  already has made a step toward allowing public funds to supplement private schools. In a split decision last year, the court upheld a lower court ruling allowing the state to reimburse private schools for the cost of complying with state mandates such as recordkeeping and background checks for teachers.

Republican state Rep. Bryan Posthumus of Cannon Township, sponsor of one of the bills, is optimistic that the federal court system will rule for the plaintiffs in the Mackinac lawsuit.

“I don’t think the Blaine amendment will hold up to federal court scrutiny,” he said during a House Education Committee hearing this week.

In anticipation of that, his bill set the stage for scholarship donors to get tax credits for private school scholarships. The legislation also includes scholarships for public school students.

Under the legislation, eligible public school students could receive $500 scholarships – or $1,100 for those in special education programs. That money could be used in a variety of ways, for example, for tutoring, extracurricular activities, books, computer hardware, summer programs, speech therapy, or transportation to eligible activities.

Eligibility is limited to students whose family income falls below 200% of the limits for free and reduced lunch programs. That would make a family of four earning less than $98,000 eligible. Students in foster care or who receive special education services would be eligible regardless of income.

The program is estimated to provide tax credits worth $500 million, money that opponents say public schools need for general education.

“That could have a significant impact to the school aid fund,” she said during a committee hearing this week. “Isn’t it more important that we are adequately and equitably funding our public schools?”

“We will not have successful public schools if we allow over half a billion dollars to be transferred to private entities,” he said.

“It is confounding that my Republican colleagues are now taking tax dollars out of the school aid fund and giving them to private organizations and their wealthy donors under the guise of helping schools and their students recover from the pandemic,” she said. These bills “serve a naked partisan agenda on behalf of the billionaire DeVoses to test Republican legislators’ allegiance to their radical privatization agenda.”

Proponents like parent Traci Lambert of Traverse City say Michigan public schools already get a lot of money, including a $6 billion infusion of COVID relief funds. Lambert testified this week before both the House and Senate education committees, saying she’s already spent more than $20,000 on tutoring, therapy and other services after public schools failed to provide appropriate services to her 16-year-old daughter, who has Down syndrome.

Jessie Bagos, who is one of the plaintiffs in the Mackinac Center lawsuit, also testified. Bagos said her twin first graders suffered last year when Royal Oak schools switched to virtual learning.

“They went from happy little guys who liked school and learning” to boys who cried in front of computer screens while friends whose families could afford private school enjoyed in-person learning, she said.

“I never want to be in that position again,” she testified.

“If Michigan had a program like this before, our boys would not have had to suffer so much,” she said. “It would have given them a kindergarten year that was a positive experience.”