Please ensure Javascript is enabled for purposes of website accessibilityTexas Democrats went “all in” to protect a San Antonio-area House seat from flipping. The GOP still took it. – Capitol Hill Pulse Skip to the content 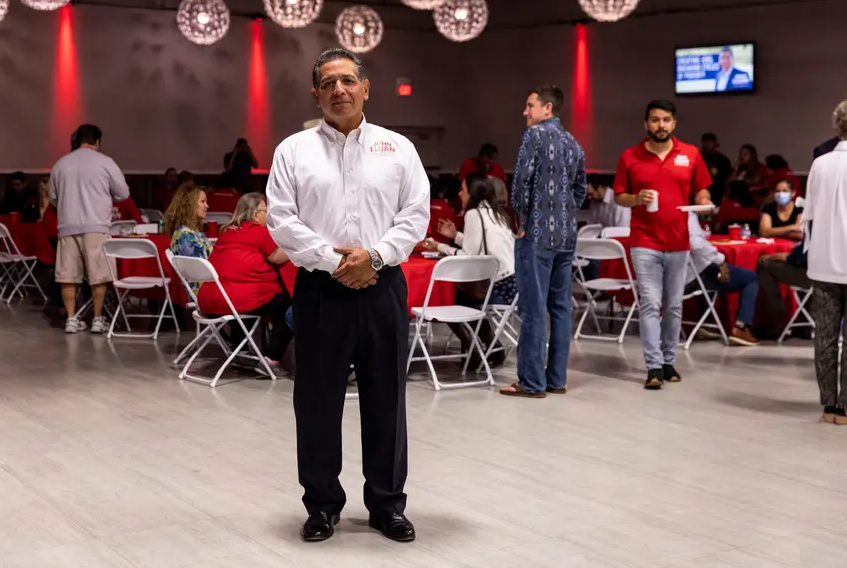 Texas Democrats went “all in” to protect a San Antonio-area House seat from flipping. The GOP still took it.

SAN ANTONIO — This time, everyone knew what was up.

While Democrats have been caught off guard by previous special elections in the San Antonio area, Republicans made clear from the get-go that they were gunning for the open seat in Texas House District 118. And Democrats took them seriously, seeking to show early on that they would not be upset in an overwhelmingly Hispanic district that President Joe Biden carried by 14 percentage points last year.

And yet Republican John Lujan captured the seat Tuesday, in exactly the kind of nationally reverberating outcome that Democrats were working to avoid.

Lujan had a lot going for him. He was a very familiar face in the district, having held the seat briefly in 2016 and making his eighth appearance on a ballot in HD-118 in six years. He had a party backing him that was united, determined and willing to spend big. And he ran a campaign that largely avoided the red-hot issues that have been animating Texas politics recently.

The end result was a 2-percentage-point victory that left Republicans crowing that they are on the march in South Texas, where they have been eager to make new gains after President Joe Biden’s underwhelming performance there last year.

As he walked out of his election night party shortly before midnight Tuesday, Lujan attributed his victory to a “perfect environment.” His win came the same night that Republicans captured the governorship in Virginia in a race widely seen as an early referendum on Biden’s presidency.

“What really, I think, helped is the fact that there’s a big movement, I think, for conservatism because people are seeing what’s going on from a national level all the way down to our borders and to the jobs and the hardships, gas prices — all these things are big in our community,” Lujan said, “And the Hispanic community has always been about faith, family and country, and I think that just shows now, and I just think all of those things made a perfect environment for this victory.”

Lujan’s campaign believes his deep community involvement on San Antonio’s South Side and bread-and-butter platform gave him considerable crossover appeal. While Lujan got 49% of the early vote, his campaign found that only 40% of all early voters came from households with Republican primary voting history, suggesting he won over a healthy amount outside the GOP base.

Democrats said the playing field was tilted against them throughout the race. Democratic opponent Frank Ramirez’s campaign manager, Ryan Garcia, said Wednesday it was “clear the campaign was at a major structural disadvantage compared to the Republicans from the very beginning,” starting with the short timelines for each special election that Gov. Greg Abbott called.

While the campaigns’ spending numbers past Oct. 23 are not available yet, it is true that Lujan had a strong fundraising advantage in the runoff — nearly 2 to 1 — and he benefited from national money. However, Ramirez also got national support, collecting checks from the National Democratic Redistricting Committee and the American Federation of State, County and Municipal Employees.

Lujan nonetheless was a formidable fundraiser from the start of the race this summer. One of Ramirez’s top individual donors in the runoff, Austin lawyer Adam Loewy, lamented Wednesday that there are “wealthy Democratic donors in Texas that easily could have written checks to put $50-100,000 more behind Frank that I think could’ve easily won this election.”

“The truth is, this was a Democratic seat, and to allow a Republican to come in and spend 2 to 1 to win this seat … is just a disaster, just a disgrace,” Loewy said.

Hinojosa also claimed Republicans had “insider information” about the runoff date that gave them an unfair head start — a reference to Lujan campaign literature that said the runoff would be Nov. 2, before Abbott had announced it. Lujan said he had assumed the date would be Nov. 2 — the same day as the statewide propositions election — and made the decision to print the literature against the advice of his campaign.

Hinojosa also complained that state and county election officials “made the process as confusing as possible for voters.” The Bexar County elections administrator, Jacque Callanen, has said Abbott called the runoff too late for it to be included on the same ballot as the constitutional amendments. That led to effectively two elections Tuesday, requiring voters to submit separate mail-in ballots or to get in line twice to vote in person.

Both sides complained about the election setup, with Lujan calling it “just bad.” Callanen did not respond to a request for comment on Hinojosa’s criticism.

Despite the hurdles, turnout hit 11% Tuesday, higher than it was for both the Sept. 28 special election, which was 7%, and the 2016 special election runoff that Lujan won and Democrats dismissed as a low-turnout fluke. Turnout for that contest was 4%.

Lujan won the seat in January 2016 only to lose it months later in the general election for the full term, before he could ever cast a single vote in the Legislature.

But this time, Lujan stands a better chance of holding on to the seat because Republicans redrew the district to be more competitive for them next year. Biden would have carried the new HD-118 by only 3 points.

Both Lujan and Ramirez plan to run again next year.

“This seat remains, like it was yesterday, a battleground seat,” Garcia said. “I don’t think there’s any reason to expect John Lujan’s ever gonna take a vote in the Legislature.”

In both Lujan’s 2016 race and the 2018 special election runoff for Senate District 19, Democrats had faced criticism they were asleep at the wheel. But Democrats went out of their way this time to show that would not be the case, with the state party issuing a statement in the first round insisting they were “going all in” and “not taking any chances.” Per usual, the party did not endorse a Democratic candidate in a field that featured multiple, but it praised all three as “strong” and attacked Lujan as the presumptive Republican qualifier for the runoff.

To the extent there was Democratic consolidation in the Sept. 28 special election, it was around Ramirez — and for good reason. At 27 years old, he already had an impressive resume, working for former HD 118 Rep. Tomas Uresti and then for a San Antonio City Council member. There was no question about his roots in the district, and he was a polished, affable campaigner.

Still, Ramirez had to contend with two other Democrats in the first round and squeezed into the runoff behind Lujan, who had only one minor GOP opponent and came in first by a wide margin. The Republican candidates and Democratic candidates effectively split the Sept. 28 ballots 50-50, portending a hard-fought runoff.

One of the main Democratic messages against Lujan was that he was beholden to Abbott, who endorsed Lujan in the first round, and that he would go along with the sharp conservative turn the state has taken recently under the governor. Even in defeat, Democrats were still taking swipes at Lujan over Abbott, with Ramirez saying in his concession statement he hopes Lujan will “choose to put our community first rather than be complicit in Governor Abbott’s attacks on Texans.”

Lujan downplayed the extent of his relationship with Abbott, though he said he supported some of the state’s recent hot-button policies, like the new abortion restrictions and permitless carry of handguns that went into effect in September. His campaign, however, was more focused on less polarizing issues that connected to his background as an IT business owner and former firefighter and sheriff’s deputy.

Lujan’s biggest donor throughout the race was the Associated Republicans of Texas, which spent $232,000 on in-kind contributions for canvassing, digital ads and get-out-the-vote text messaging. The group stuck to relatively basic issues in pitching Lujan, running ads saying he would ensure funding for police and public schools and “cut government regulations and support small businesses.”

Lujan talked on the campaign trail about his aversion to partisanship, but he did directly appeal to fellow partisans. He ran ads that promoted a “red wave” and appeared on Fox News the morning of the runoff from the Republican National Committee’s new office in San Antonio.

His win gave fresh material to Republicans to say they are building on their 2020 gains in South Texas, where, at a minimum, they would like to flip a congressional seat and pick up one more state House seat next November. ART’s vice president, Aaron De Leon, said in a statement Tuesday night that Lujan’s victory “sets the tone” for that offensive.

Lujan will no doubt have a high-powered ally at the Capitol in House Speaker Dade Phelan, R-Beaumont. It was the first race that Phelan got seriously involved in since ascending to the speakership in January, and his campaign ended up funneling $75,000 to Lujan, which included the single biggest donation he got in the runoff, for $50,000.

As he was getting ready to leave his election night party — which coincided with the Houston Astros losing the World Series in Game 6 — Lujan got a congratulatory call from the speaker.

“He was very disappointed — that the Astros lost,” Lujan said. “But he said this election made the night for him.”

This article was originally posted on Texas Democrats went “all in” to protect a San Antonio-area House seat from flipping. The GOP still took it.