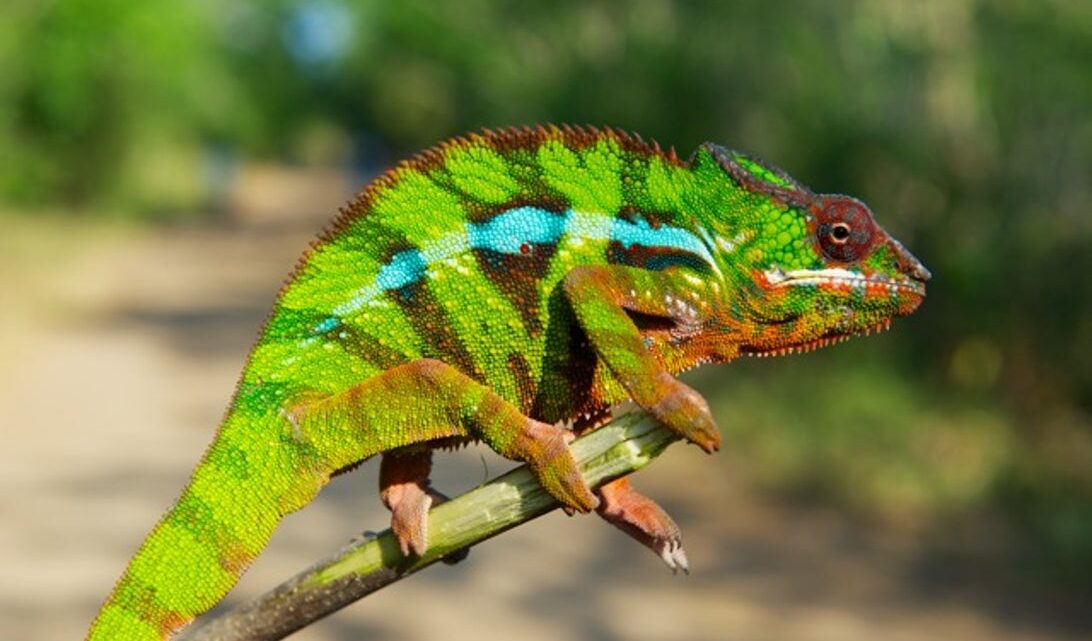 Tails come in all shapes and sizes and can be used for all sorts of things. For instance, tails can help with locomotion, to keep balance, and to communicate with others. Some tails are even able to grasp an object firmly and allow the animal to hang its full body weight on it. These tails are called prehensile, an adaptation found among some monkeys, seahorses – and chameleons.

Having a prehensile tail allows chameleons, which often live in trees and bushes, to firmly grasp onto a branch. This frees the legs so it can reach the next branch, allowing it to cross greater distances and reducing the risk of falling.

While we know that most chameleons have prehensile tails, it’s not yet clear how these work and what makes them simultaneously so flexible and strong. Figuring this out isn’t just interesting: understanding how such complex mechanical systems work in nature has many potential applications, since so many things in our daily lives are, in a way, inspired by nature. For instance, such a strong and flexible structure might be useful in various industries.

My colleagues and I, from the Evolutionary Morphology of Vertebrates group at Belgium’s Ghent University, are conducting research that looks at the anatomy of vertebrate tails, including that of chameleons. We focus on the shape of the tail vertebrae and the musculature, looking for adaptations that help explain how these tails are able to do the things they do.

Most recently, we published the results of a study on how shape variation in chameleons’ tail vertebrae affects the way they move. This wasn’t as simple as examining chameleon tails attached to the animals – imagine commanding a chameleon to use its tail in the way a group of humans want it to. So, we needed models of an independent tail that could be moved in many controlled ways, and into which we could build the muscles. Such models have a big advantage: the more they resemble living animals, the less researchers have to rely on living animals to answer their questions.

But what does it take to build an independent tail? That’s where a technology more commonly used in engineering sciences came in.

Using an engineering software package, ADAMS, we connected separate bodies (in this case, chameleon vertebrae) with hinges (representing the joints), and applied (muscle) forces onto them. This computer simulation approach is called multibody dynamic analysis, an engineering technique that biologists have adopted to explore how animals are able to move.

First, we needed accurate anatomical data. A CT scanner allowed us to make incredibly high resolution scans (the chameleons in this case were already dead; they were museum specimens). From that we developed a 3D model of the tail vertebrae, entered it into the simulation software, and added each muscle to it, one by one.

This resulted in a virtual model resembling an actual chameleon tail – or at least, a part of it – onto which the software allowed us to apply forces from each of those virtual muscles. And so we got the 3D structure to move, like a real tail would.

In a previous study, we noticed that both the shape of the vertebrae and the way the musculature is organised changes along the tail. We could determine two different regions: the one closest to the head, the proximal region, and the one the furthest from it, the distal region. Armed with this information, we made models based on these two regions so we could compare the results from both.

These different models meant we could compare the effect each region of muscular architectures and vertebral shapes would have on tail movement, as well testing whether the proximal or distal region is the most efficient when it comes to generating force.

Among other findings, we determined that the far end of chameleons’ tails is more effective at gripping things than the part closer to the legs. This is a useful adaptation for chameleons, which use their tails to cross gaps between branches. This builds on another, earlier piece of our research that described how the animals use their tail when crossing gaps of different lengths, showing a variety in crossing strategies depending on the distance that needs to be crossed.

When they grasp a branch with their hind legs and, by wrapping their tail around their perch, free their arms to reach the next branch. To bridge even longer distances, they can do so by releasing their hind legs, thereby hanging by only their hands and tail. So it makes sense that the distal region of the tail is best at exerting force.

The chameleon tail computer model was a very useful addition to our research. It’s still a very simplified version of what an actual chameleon tail looks like and how it works, but it is a very useful starting model from which we can further explore the relation between tail form and function.

The more we learn about chameleons’ anatomy, the more accurate future models will be, reducing the necessity to use live specimens for experimentation. This also opens up our understanding of how prehensile tails work, not only in chameleons but also in other animals with a similar special adaptation.