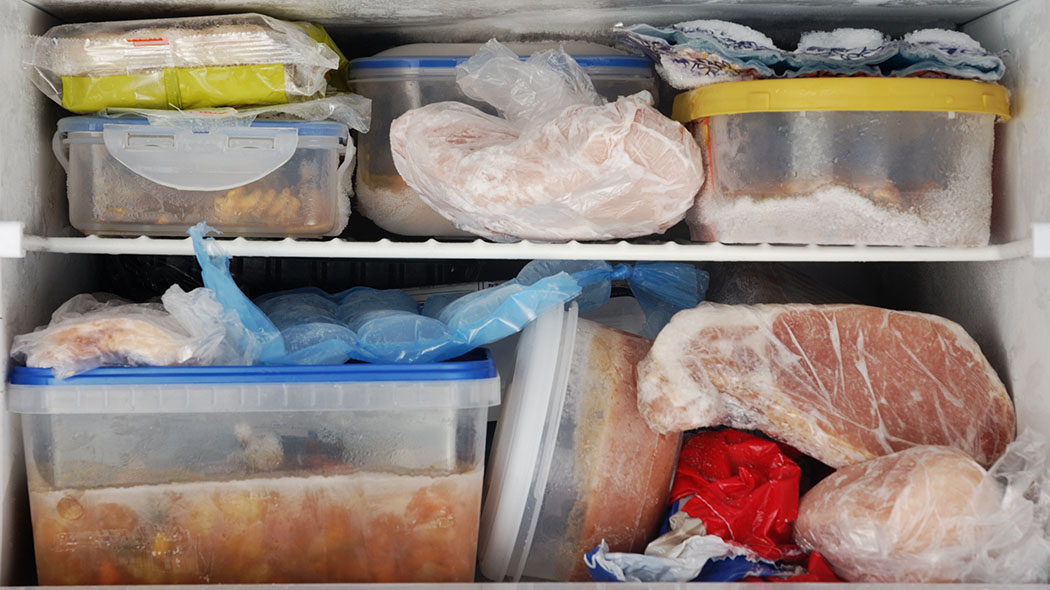 Open the freezer door and there, way in the back, may be an old carton of ice cream growing spikes of ice. Or a forgotten frozen lasagna covered in icy crystals. Or drying of meat surfaces if not well covered.

People sometimes call this phenomenon “freezer burn,” and it happens when tiny ice crystals on the food’s surface evaporate directly into vapor without first going through the liquid water phase – a process scientifically termed sublimation. This moisture loss can leave the food’s surface layers dried out and discolored.

As a food scientist, I call the initial surface ice formation “ice recrystallization” and study ways to slow it down.

Ice recrystallization damages and destroys organic cells – the smallest living units found in animals and plants. It is just as much a problem when storing harvested food crops or biomedical research materials – like cell cultures – as it is for storing frozen pizza or peas, and can lead to a lot of waste.

There are artificial substances that prevent this kind of ice damage, but few of them are safe to eat. So along with fellow University of Tennessee and Oak Ridge National Laboratory scientists, I’m working for the next three years under a $550,000 grant from the National Science Foundation to identify safe “bio-based” options – materials already found in nature, including substances derived from the natural human digestion process when food is consumed.

How does ice recrystallization happen?

The food industry uses “blast freezing” to avoid formation of large ice crystals in frozen food. This process involves exposing foods very quickly to a low temperature and a high rate of air movement, which causes the food to freeze into a mass of numerous small crystals. Small crystals are much less damaging to frozen matter than large ones.

The problem starts after these foods are moved to regular freezers for storage, including home freezers. The automatic defrost function in such units involves turning the compressor on and off several times a day, lowering and raising the temperature to prevent ice buildup. This fluctuation partially melts the ice in the food and then re-freezes it, a process that may create larger and more damaging ice crystals.

These changes can make food at best unpalatable – who hasn’t endured eating freezer-burned vegetables or a watery, thawed strawberry? – and at worst unusable.

According to a recent study by College of William & Mary food system researcher Zach Conrad, total spending on food in the United States per person per day, between 2001 and 2016, was $13.27, and $3.62 worth of that expenditure, or 27%, was wasted food.

Conrad found that just 1.4% of that waste involved frozen food, amounting to about 5 cents per person per day, or $18.25 annually. But those nickels add up to more than $5.89 billion worth of frozen food wasted every year.

So as the frozen food market continues to grow, the importance of minimizing or preventing ice damage becomes obvious.

The synthetic chemicals that prevent ice recrystallization tend to be toxic to living organisms, so their usefulness for protecting food is very limited. Via its lengthy and rigorous review process, the U.S. Food and Drug Administration has approved an artificial polymer called polyvinyl alcohol, or PVA, as safe for use in food packaging materials, but not as a food additive.

PVA is used industrially to prevent ice recrystallization in substances like cement and concrete, as well as when freezing human cells, tissues and organs to preserve them for transplantation and biotechnology uses.

There are also “semi-synthetic” compounds – so labeled because they are made by altering naturally occurring materials – that hold promise for curbing ice damage. They include substances called glycopolymers and polyampholytes, which have been reported to inhibit ice recrystallization, preserve cells and increase cell viability. Many of these compounds are in early stages of research and development, and not yet used commercially. Their safety for use in food has yet to be demonstrated or approved.

I research alternatives to both synthetic and semi-synthetic materials that are bio-based – that is, based on substances already found in humans, animals and plants, and through natural biological processes. I believe that these bio-based solutions are especially promising options because they don’t involve unnatural manipulation.

For instance, for the egg processing industry, I discovered how to use natural peptides derived from eggs – short strings of amino acids also found in our guts – to prevent freezing-caused damage to egg yolks, rather than adding salt or sugar to yolk before freezing.

Under our National Science Foundation grant, my team is researching substances that mimic the functions of the antifreeze proteins found in cold-water fish or cold-tolerant plants, which inhibit ice recrystallization and prevent ice growth in their internal tissues.

One challenge is that these antifreeze protein molecules are present in very low concentrations in nature. This makes them very costly to extract from organisms and produce them at an industrial scale.

We are conducting research on peptides derived from both common and unique food proteins, such as soybeans, dairy, fish, meat and insects. Thanks to research by Srinivasan Damodaran of the University of Wisconsin, we already know that small peptides from fish gelatin and cattle collagen proteins are effective in preventing ice recrystallization in ice cream. This power of peptides varies greatly depending on the source protein, however, so we are investigating the reasons for these differences.

As we learn more about these peptides and how to produce them at a commercial scale, I believe they may be useful across several industries, from improving the quality of frozen foods, to increasing the resistance of agricultural crops to freezing temperatures, to better preserving cells and tissues, and even in uses like de-icing roads and aircraft.