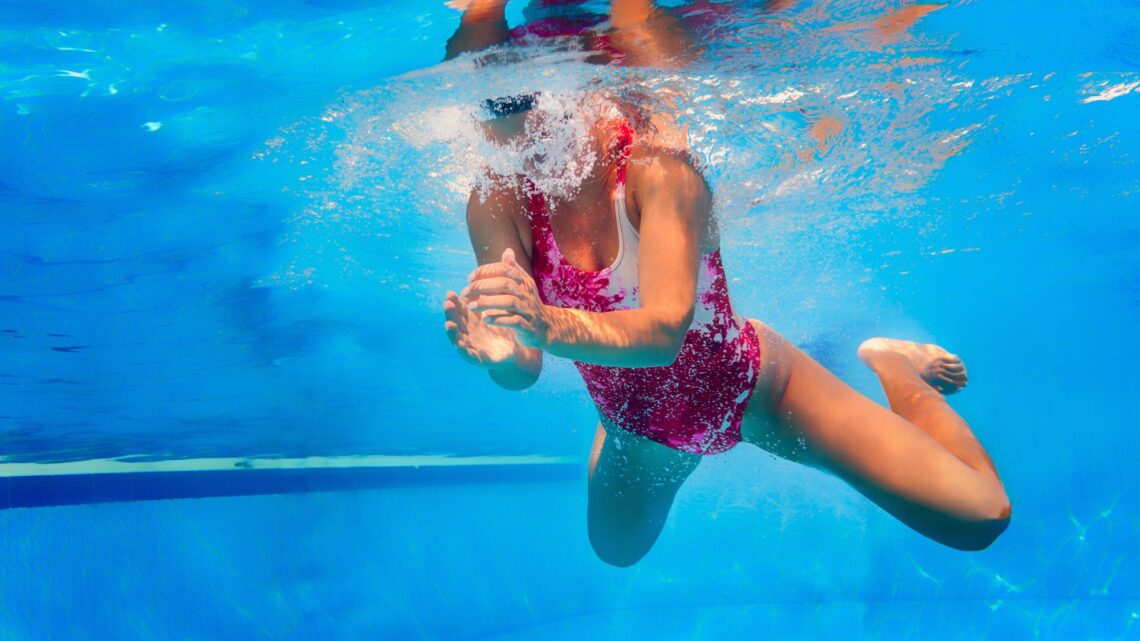 To win swimming gold in Tokyo, swimmers not only have to generate incredible power with their arms and legs to propel themselves through the water; they also have to overcome the relentless pull of the water’s drag while doing so.

Without being able to don special low-drag suits or use technologies to help them fly over the water, how can swimmers make the effect of the water’s drag as small as possible?

The best athletes in this year’s Olympics will do it by swimming under, rather than on top of, the water – at least as far as the rules allow.

Waves are a drag

Water is much denser than air, so you might assume swimmers would benefit from using a technique that allows them to sit high in the water, with as much of their body out of the water as possible.

But there are two problems with this strategy.

First, it costs energy to produce the forces needed to lift the body, which would be better spent propelling the swimmer forwards towards the finishing wall.

Second, when we travel on the water’s surface we waste energy making waves. During fast swimming, such as in the sprint freestyle events or during starts and turns (where speeds exceed 2 metres per second, or about 7 kilometres per hour), wave generation slows the swimmer down more than any other factor. Reducing wave formation is therefore vital to swimming success.

Waves are produced as the pressure exerted by the swimmer on the water forces the water upwards and out of their path. Other pressure changes around the swimmer’s body also cause waves to form behind them, and sometimes to the side.

The energy required to generate waves comes from the swimmer themselves, so a lot of the power generated by the swimmer’s muscles is used in wave generation rather than moving the swimmer forwards.

But waves aren’t formed when we (or fish, dolphins or whales) swim under the water, because waves only form when an object (like us) moves at the boundary between two fluids of different densities, such as water and air during swimming. And this fact hints at an intriguing solution to the drag issue.

A change in thinking

Swimmers had noticed the benefits of staying underwater from at least the 1950s.

The breaststroke event was the cause of major controversy in the 1956 Melbourne Olympic Games as swimmers experimented with staying underwater for much of their races. The winner of the men’s 200-metre event, Masaru Furukawa of Japan, swam underwater for most of the first three laps of the four-lap race. This practice was swiftly outlawed after the games; swimmers were forced to surface before they could start to swim.

But the practice of swimming underwater in freestyle (front crawl), butterfly and backstroke events only took off after swimmers mastered the “underwater undulatory technique”, better known as the dolphin kick.

Here, the swimmer propels themselves underwater by undulating the lower body in a wave-like manner while maintaining a rigid and streamlined upper body position with arms stretched overhead.

The amplitude of the lower body undulation increases from the hips to the feet so the “wave” produced by the body is much greater down towards the feet, creating a whip-like effect. This pushes water rapidly backwards, propelling the swimmer forwards according to Newton’s law of action and reaction.

Using this technique, swimmers in the backstroke events gained a significant advantage from the 1980s onwards, and from the 1990s it was also common in freestyle and butterfly events.

The technique was so effective that swimming’s governing body, FINA, limited its use to only the 15-metre segment after starts and turns. Swimmers are now disqualified if they swim too far underwater.

Yet the benefits of improving the underwater undulation technique are so great that swimmers still spend hours each week in training improving this part of the race.

Although an ongoing research effort aims to find the optimum technique for different swimmers, a few practices seem to be commonly associated with underwater success.

First, swimmers who stay underwater for the full 15 metres will have faster starts, turns and overall race times. This effect is particularly strong in backstroke events, and when swimmers make the most of the final turn in a race (when swimmers usually surface quicker because they are growing tired).

Second, staying deeper underwater is important. Wave drag is slightly reduced by swimming just below the surface, but swimming 40–60 centimetres underwater can reduce drag by 10–20%. And there are further benefits when swimming a metre or more under the water, especially when start and turn push-off speeds are fast (as in most shorter races).

Third, the best swimmers will likely display a faster kick frequency, although each kick is no bigger than those of slower swimmers. In particular, a fast extension of the knee in the downbeat of the kick that occurs at the end of the wave-like motion may separate the faster from slower underwater swimmers.

And finally, although it will be hard to spot in the underwater camera shots at the Olympics, the feet of the faster underwater swimmers may rotate inwards during the downbeat of the kick, rather than staying rigidly in line with the leg. This rotation allows the top surfaces of the feet to orient horizontally to the swimming direction, just like the flute (tail) of a dolphin or whale lies horizontal to their swim direction, producing more propulsion at the feet.

So, at the Tokyo Olympic Games, look for the swimmers who stay underwater as long as allowed in starts and turns, and check the techniques they use when the director cuts to the underwater shots.

The swimmers who make the most of these parts of the race might just propel themselves to Olympic gold.