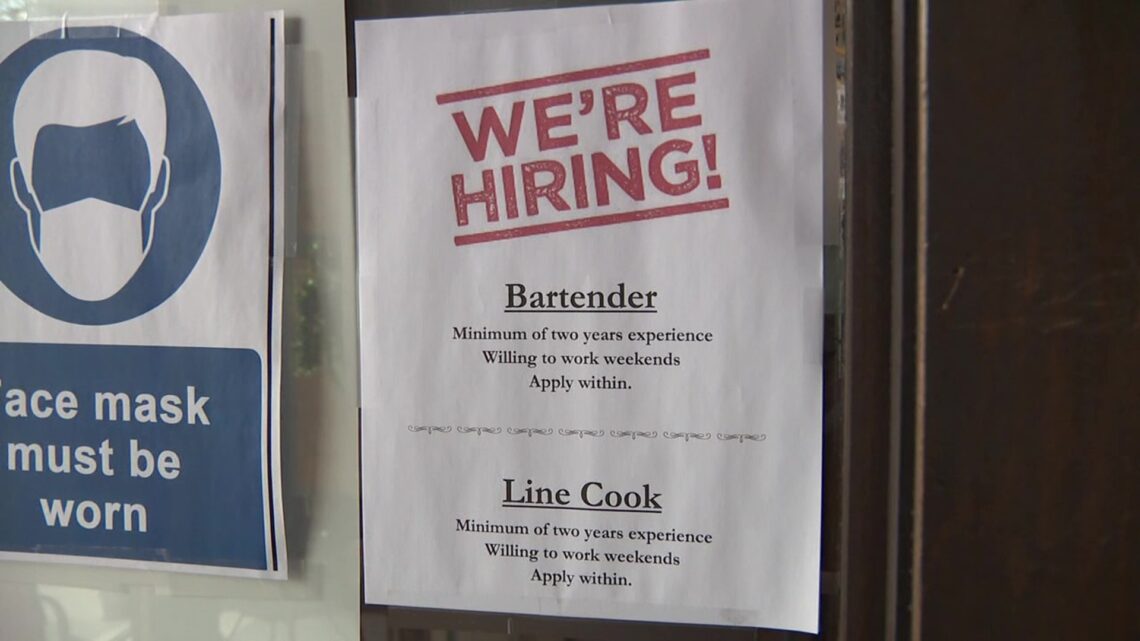 “All hard work brings a profit, but mere talk leads only to poverty.”

At the beginning of the pandemic, shopping for groceries and basic household items was like going to a Black Friday sale at Best Buy. Customers arrived in the wee hours of the morn to get that coveted roll of toilet tissue or bottle of bleach. It was wall-to-wall pandemonium as sparsely stocked shelves emptied within hours.

Anyone who has been to the retail store lately must imagine they are caught in a pandemic time-warp. The lines remain long and many items in plastic bottles and aluminum cans are in short supply. And others that went AOL are back as brand X or miraculously rematerialized in smaller containers at ludicrously high prices.

The problems with supply and demand during the pandemic have transformed into shortages of products produced by industries that rely on unskilled or semi-skilled U.S. labor. This supply deficit has fueled unwarranted increases in wages for basic labor. And every shopper is paying dearly for this with escalating prices.

The pandemic caused the biggest global recession in history. In the U.S., over 20 million people lost their jobs. To help unemployed workers survive the economic lockdown, Congress passed an innovative $600 per week federal unemployment package.

“We have shown America that their government works for them.”

During the third quarter of 2020, the U.S. Bureau of Economics showed economic output surged by 33% as vaccinations increased and state economies reopened. Joe Biden inherited an economy that was recovering beyond expectations. All he had to do was follow the economic formula that Trump’s advisers put into place.

But liberal logic prevailed. Instead of continuing Trump’s successful policies, the stalwart progressive Biden gifted unemployed workers another $300 a week for the rest of the year. Data from the Economic Policy Institute shows the average unemployed U.S. worker is pocketing a generous $36,000 yearly for not working.

According to the Employment Policy Research Institute, over half of the middle-skilled workers earn an average of $30,000 annually and 36% earn $35,000 or more. Middle-skill jobs are those that require a high school diploma, basic ability and training but no college degree. These include transportation and factory jobs, food preparation, packaging, retail sales clerks, and many service industry jobs.

Many non-workers are making more than they did working, and not paying a dime in taxes while those that are working foot the bill for this. The CBO predicts this will add billions to the deficit since this money is tax free. The only way this shortfall can be replaced is with across the board tax increases on workers and businesses.

At a recent news conference, one reporter asked Biden about the unsettling trend of millions of jobs going unfilled in an economy that was rapidly improving. He asked Biden if he thought his generous unemployment benefits were eroding the incentive to work. Biden replied, “My economic advisers and I see absolutely no evidence to support this. You can’t believe everything you’ve been hearing.”

Every president since FDR has promised all Americans “a chicken in every pot.” Biden “promised everyone a turkey”! And he vowed to “create good paying jobs” for all those who wanted one. He also guaranteed generous gifts from the public treasury for everyone who had no desire to capture their American Dream.

But in contrast to his political oratory, for the past seven months Biden has failed to fulfill his promise of creating high paying jobs for anyone. Contrarily, Biden has aggressively insured that millions of workers remain perpetually unemployed.

“I guess every single word I’ve ever said is going to be dissected now.”

By the time Biden took office, Congress had already pumped over $3 trillion into the stalled economy to keep it moving. Trump’s unprecedented stimulus left U.S. families $12 trillion richer than before the pandemic! Data from Economic Tracker revealed the median family income in January 2021 was the highest in decades.

During a recent Congressional floor session. U.S. Sen. Rob Portman asked Biden to dismantle the $300 a week “work disincentives” that he and other Democrats cleverly sandwiched into the budget bill. He claimed that the Democrats contrived this scheme to double the minimum wage for low paid hourly workers.

“We have a paralysis in Washington that’s not serving our country.”

Cicero told us, ”Only a fool persists in error.” Biden has a history of being on the wrong side of every issue. He worked with segregationists to prevent busing and now has adopted the progressive socialist narrative of sharing the wealth by punishing the rich. His progressive marching orders are to pay people not to work to create a labor shortage so low wage earners get paid more than they’re worth.

The progressive goal is to create an unsustainable, overpaid, unskilled workforce and a state welfare dependent underclass. This is financed by the redistribution of wealth from the upper and middle classes and businesses. This is the traditional socialist model that replaces the elemental precepts that drive market-capitalism.

Lenin’s formula to destroy capitalism is to overload the markets with hyperinflated currency. This equalizes the classes because business can’t plan beyond today since money will be worth less tomorrow. When everyone has a pocketbook full of worthless money that buys nothing, government becomes the sole proprietor. By discouraging individual effort it breeds collectivism, the precursor to socialism.

“When people say, ‘You’re telling me we have to go spend money to keep from going bankrupt?’ I say, the answer is yes, that’s what I’m telling you.”

Snow can disappear straight into the atmosphere in hot, dry weather

Many Tennessee economic indicators trend up, others mixed