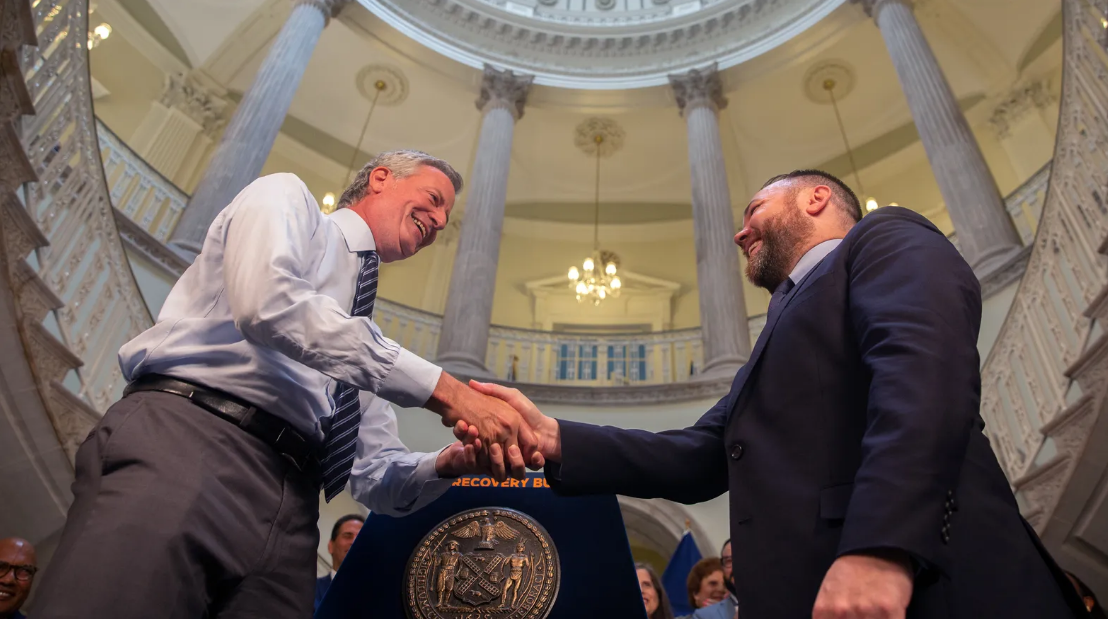 But for all the self-congratulations at a City Hall news conference, budget experts, comptrollers and advocates for a range of causes assailed the plan as unsustainable — saying it will leave billions in budget deficits for the next mayor.

Critics also pointed to $1 billion in federal aid earmarked for recurring expenditures like the expansion of Pre-K and no effort to wring substantial savings from poorly performing programs or the municipal labor force.

“This is a missed opportunity when you have so many resources to restructure government to be sustainable in 2024 and 2025 and to stabilize the city’s finances,” said Andrew Rein, president of the non-partisan Citizens Budget Commission.

City Comptroller Scott Stringer, a defeated candidate for mayor, criticized the use of federal money for Pre-K and called for more reserves. State Comptroller Thomas DiNapoli said revenues must be identified to pay for new and expanded programs.  And Councilmember Brad Lander, who is battling Johnson to succeed Stringer, voted against the budget, saying it lacks transparency on the use of the federal aid.

“I favor expanding Pre-K, but you have to do it with a plan to pay for it in the long run,” Lander said. “Rolling back on cutting the workforce through attrition and counting on $1 billion in labor savings you have been promising for three years is not a real plan.”

The budget increases are the result of much stronger tax collections than anticipated and the unprecedented federal aid appropriated in the Biden relief bill. The city ended the last fiscal year with $2.1 billion more in revenue than estimated only two months ago. The city also has received approximately $15 billion in federal aid since January.

With the mayor, Johnson and most of the City Council leaving office because of term limits, there was seemingly little political incentive to tame future deficits. But the Council and the mayor did agree to double to $1 billion the amount of money the city is setting aside in a new rainy-day fund authorized by the voters in a recent referendum.

The move increases the city’s reserves to $5 billion — more than anyone expected to be available before the pandemic hit, but still $1 billion less than what the Bloomberg administration set aside before the 2008 financial crisis.

The city posted some budget documents late in the day, and it appears the Council made few significant changes to the mayor’s executive plan submitted in May.

The result: The incoming mayor will face budget deficits of $4 billion in each of the next three years. Despite the gusher of federal aid, de Blasio pared those deficits by less than $1 billion from what was estimated before the gusher of help from Washington.

The red ink may actually be $1 billion higher each year since the city has included $1 billion in labor savings in the budget for future years, even though de Blasio has failed to reach a single agreement to reduce costs.

The mayor has allocated no money in the budgets for future years to pay for pay raises for city employees with most of municipal workforce contracts expiring in the next year or two.

The squeeze on the new mayor will be severe with the need to find $1 billion a year to replace federal aid for recurring programs at a time when fixed expenses for pensions and debt service will take up 49% of the budget, compared with 43% in the budget for the current year.

De Blasio shrugged off criticism that he has created a difficult situation for his successor, calling budget gaps in future years “manageable.”

“We are confident about the economy coming back strong,” he told reporters. “As a result, revenue will come back strong and stronger.”

With their final budget, the mayor and the Council rejected a strong lobbying effort by an unusual band of civic and advocacy groups to revamp the planned use of federal aid, which the coalition called “scattershot” in a mid-June letter.

“The federal stimulus is a great opportunity to bring neighborhoods back better than ever and invest in human services programs,” said Michelle Jackson, executive director of the Human Services Council, an umbrella group, and one of the members of the coalition.  “This budget does not contain significant increases.”

The Council had asked for a one-time cost-of-living adjustment for human services workers who worked through the pandemic. It got half the amount it wanted.

A strong push for the city to fund a major expansion of job training also came up short.

Economist James Parrott of the New School has estimated as many as 200,000 New Yorkers who lost their jobs during the pandemic may need to be retrained. The city’s unemployment rate was 10.9% in May, nearly twice the national average.

Parrott, during a recent discussion of the issue for the Harvard Business Club, called for spending as much as $1 billion of the federal money for workforce programs.

Meanwhile, fiscal experts warned the use of federal funds for new or expanded programs poses the greatest budget risk.

“I think the budget is terrifying for taxpayers — both corporate and individual — because they are funding an increase in city services that will be unaffordable in the future,” said Kathryn Wylde, CEO of the big business group the Partnership for New York City. “We know they don’t cut services so they will raise taxes and there is nothing worse for economic recovery than to terrify the taxpayers.”