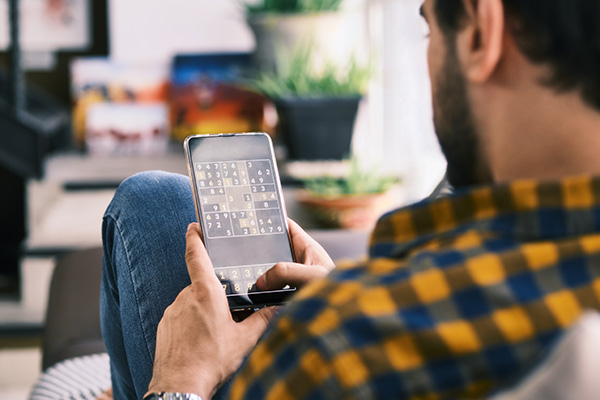 It’s an attractive idea: By playing online problem-solving, matching and other games for a few minutes a day, people can improve such mental abilities as reasoning, verbal skills and memory. But whether these games deliver on those promises is up for debate.

“For every study that finds some evidence, there’s an equal number of papers that find no evidence,” says Bobby Stojanoski, a cognitive neuroscientist at Western University in Ontario (SN: 3/8/17; SN: 5/9/17).

Now, in perhaps the biggest real-world test of these programs, Stojanoski and colleagues pitted more than 1,000 people who regularly use brain trainers against around 7,500 people who don’t do the mini brain workouts. There was little difference between how both groups performed on a series of tests of their thinking abilities, suggesting that brain training doesn’t live up to its name, the scientists report in the April Journal of Experimental Psychology: General.

“They put brain training to the test,” says Elizabeth Stine-Morrow, a cognitive aging scientist at the University of Illinois at Urbana-Champaign. While the study doesn’t show why brain trainers aren’t seeing benefits, it does show there is no link “between the amount of time spent with the brain training programs and cognition,” Stine-Morrow says. “That was pretty cool.”

The researchers recruited 8,563 volunteers globally through Cambridge Brain Sciences, a Toronto-based company that provides assessments to measure healthy brain function. (While several of the researchers are affiliated with the company, it didn’t receive funding for the study.) Participants filled out an online questionnaire about their training habits, opinions about training benefits and which, if any, program they used. Some 1,009 participants reported using brain training programs for about eight months, on average, though durations ranged from two weeks to more than five years.

When researchers looked at the results, they saw that brain trainers on average had no mental edge over the other group in memory, verbal skills and reasoning. Even among the most dedicated, who had used training programs for at least 18 months, brain training didn’t boost thinking abilities above the level of people who didn’t use the programs.

That’s not because brain trainers have poorer function to start with and then improved. Participants who had trained for less than a month, and presumably wouldn’t have reaped significant benefits from the programs yet, performed on par with people who didn’t train at all.

“No matter how we sliced the data, we were unable to find any evidence that brain training was associated with cognitive abilities,” says Stojanoski. That held true whether the team analyzed participants by age, program used, education or socioeconomic status – all were cognitively similar to the group who didn’t use the programs.

Brain training may be beneficial in specific scenarios, Stojanoski says. But “part of our goal was to look at brain training in the real world.”

That real world may be the best brain trainer, Stine-Morrow says. While it’s possible to improve mental abilities, Stine-Morrow advocates practicing those skills in different real-life situations. “That’s a much better use of one’s time than sitting at a computer and doing little tasks.”