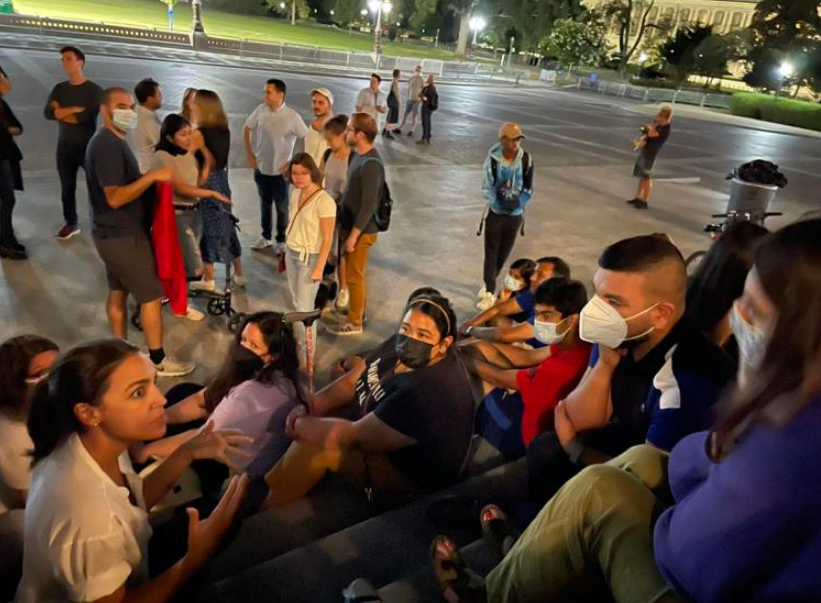 Some Arizona Democrats have joined party members from Texas and several other states in Washington to pressure their federal counterparts to pass major pieces of their progressive agenda.

Pima County Recorder Gabriella Cázares-Kelly joined state Reps. Andrés Cano and Stephanie Stahl Hamilton, both from Tucson, in attending the effort organized by Texas state lawmakers and progressive nonprofits such as the Declaration for American Democracy.

Also in Washington were sibling representatives Daniel and Alma Hernandez, both Tucson Democrats.

The Texas delegation of Democrats fled to Washington in July, hoping to deny Republicans a quorum to pass a handful of election bills, some similar to what was signed into law in Arizona.

“We met [Alexandra Ocasio-Cortez]!” she tweeted. “[Cano], [Stahl Hamilton], AOC, and I talked about [Arizona’s] vote by mail system, the [Arizona] legislature, realities of being a working class candidate, how society expects poor people to be ashamed for living, I told her about [Indivisble Tohono] and the border wall.”

Cázares-Kelly said the Democrats spoke about white supremacy and “how we still only cater to land owners when we talk about voting!”

Cano echoed other activists who spoke at a Tuesday rally, saying the time is right to pass H.R. 1, referred to as the For the People Act.

“We won’t sit back while extremist lawmakers across our Nation – including in [Arizona], [Texas], and [Georgia] – do everything they can to take away our freedom to vote,” he tweeted.

Democrats in the U.S. Senate don’t have the votes to pass the measure because of Arizona Democratic U.S. Sen. Kyrsten Sinema and West Virginia Democratic U.S. Sen. Joe Manchin’s opposition to abolishing the filibuster, a parliamentary mechanism that means nonbudgetary legislation can be stymied unless it has more than 60 votes. Sinema has defended maintaining the filibuster, saying it brings about bipartisanship and stops wild swings in policy every time the minority party takes power.

Republicans and others oppose measures such as H.R. 1 and H.R. 4 (The John Lewis Voting Rights Act), saying they will federalize elections and open avenues to voter fraud.

“State Democratic lawmakers are fleeing to Washington for a blatant political stunt, abandoning their constituents to join their Texas counterparts for a summer vacation,” said Jessica Anderson, Heritage Action for America executive director. “This ploy to reinvigorate S. 1 and H.R. 4 before the August recess is driving towards one thing: creating a false narrative that Congress should nuke the filibuster and advance the Corrupt Politicians Act.”

GOP report points to Wuhan lab as source of COVID