Please ensure Javascript is enabled for purposes of website accessibilityTexas House Democrats trying to block the GOP voting bill are pinning their hopes on Congress. So far Congress is unmoved. – Capitol Hill Pulse Skip to the content 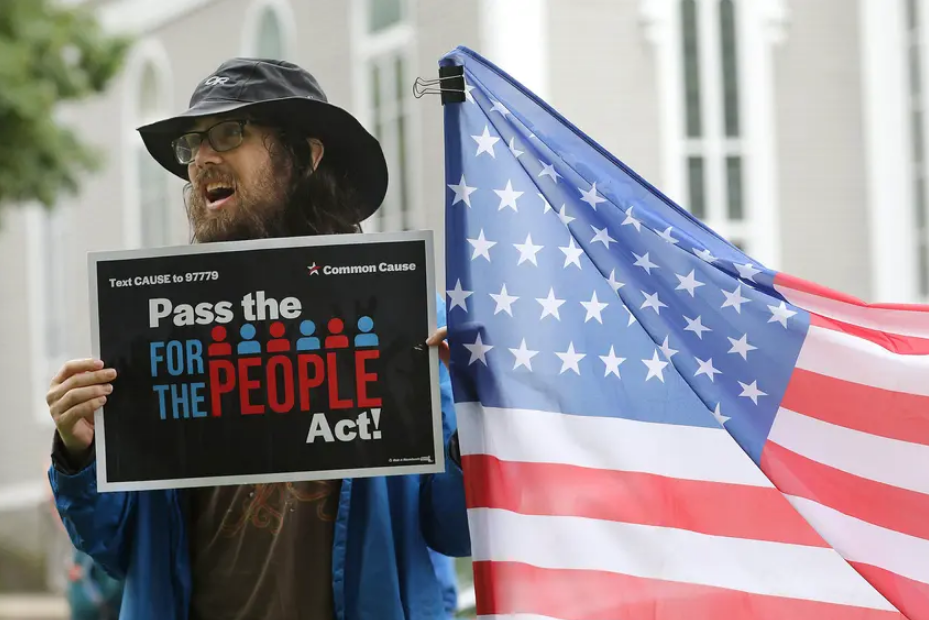 Texas Democrats slipped out of the state 10 days ago because they were out of options back home, powerless to stop the Republican majority in the Legislature from passing its priority voting bill. With Gov. Greg Abbott committing to call more special sessions until the legislation is passed, Democrats have said they’re pinning their hopes on Congress to take action to block the attempts to restrict voting access.

Now in their second week hunkered down in the nation’s capital, the Democrats’ primetime TV interviews are slowing down and their meetings with members of Congress are spacing out. They are getting a crash course in Washington dysfunction and confronting the reality that their issues are not immune to legislative paralysis.

“We are astute about Texas politics and the way Texas government works, but it’s been a learning curve to understand how things work in Washington,” said Democratic state Rep. Gina Hinojosa of Austin.

The options ahead are fairly grim.

“To state the obvious, Senate action on an elections bill would require some sort of waiver of the filibuster rule,” wrote Rich Cohen, the chief author of the Almanac of American Politics and a longtime congressional observer, in an email. “In itself, that likely will take additional time. With the Senate seemingly focused on infrastructure legislation for at least the next couple of weeks — and even with the prospect of some legislative work days in August—it’s hard to see that Democrats would come together on limiting the filibuster without pursuing extended internal discussions.”

Last month, Republicans blocked the For the People Act, a sweeping overhaul of the nation’s elections, in the Democrat-controlled Senate thanks to a Republican filibuster.

With a 50-50 split in the Senate, Democrats need to agree on a bill and then net 10 Republicans to sign on to it in order to break a filibuster and get a bill on the floor for a vote.

The challenge for the Texas Democrats is they will need to convince at least U.S. Sens. Joe Manchin of West Virginia and Kyrsten Sinema of Arizona — and possibly other Democrats who have been less public about their positions — to do away with or change the filibuster that requires the 60-vote threshold to get a bill to the floor.

Manchin pushed back on a recent proposal from the Texas Democrats to carve out an exception within the filibuster rule for voting rights legislation, and Sinema recently wrote in a Washington Post opinion piece that it’s “no secret” she’s opposed to eliminating the filibuster in its current form. And just this week, President Joe Biden warned on CNN that getting rid of the filibuster would “throw the entire Congress into chaos.”

Even so, the Texans say they are optimistic.

“I don’t claim to be an expert on the Senate, and we have met with the vice president, who I know is working on this,” said state Rep. Rafael Anchía of Dallas, adding that the Texans have also met with Senate Majority Leader Charles Schumer, House Speaker Nancy Pelosi and West Virginia Sen. Joe Manchin. “It’s clear everybody cares deeply about voting rights.”

“I’m not in the camp that anyone who can craft a solution here is taking this moment lightly,” he added. “I think our presence has helped heighten awareness of what’s at stake.”

Over the past few days, the Texas Democrats have met with nearly all of the most powerful Democrats in Washington, save for Biden. Texas Democrats say they believe a meeting with the president is likely.

They did, however, meet with one of the president’s closest allies on Capitol Hill, U.S. Rep. James Clyburn of South Carolina. Clyburn is the third-ranking Democratic member of the U.S. House and the most powerful Black member of Congress.

“We had a really good conversation with Congressman Clyburn, where he stressed to us that absolutely there is a way to get this done,” Hinojosa said. “What we have learned is that Congress and the U.S. Senate don’t get anything done until they’re up against the deadline.”

For now, that deadline is Aug. 6, when members of Congress are expected to return to their home districts for the summer recess that will last until after Labor Day. That’s also the last scheduled day of Texas’ special Legislative session, after which Texas Democrats are planning to end their exodus.

These meetings serve as both a time for the Texans to make their case for the need of a federal voting rights bill and for Congressional leaders to advise them how to best lobby in a political arena with which they are not familiar.

Texas Democrats have been lobbying for the revival of the For the People Act, which was something of a Democratic wish list to address efforts to change voting being pushed nationwide by Republican legislatures. The bill addresses everything from a campaign finance overhaul to instituting independent commissions to oversee redistricting. It would expand automatic and same-day voter registration, voting by mail and early voting, and would limit removing voters from the voter rolls.

It is also a bill that congressional Democrats generally viewed as an opening bid for negotiations, and few realistically expected it to pass in its current form. Moreover, most of the federal legislative activity since the Texans arrived here has been focused on moving an infrastructure bill.

The current hope within the state legislative delegation in Washington is that a scaled-down version of the For the People Act might be able to move through the Senate. One idea floating is that another bill, the John Lewis Voting Rights Act, could be incorporated into the larger bill and gain passage.

The John Lewis Voting Rights Act, which was named for the civil rights icon and late member of Congress, aims to address a 2013 U.S. Supreme Court decision that gutted a provision of the 1965 Voting Rights Act that forced states like Texas to get federal preapproval before changes to elections and redistricting maps could go into effect.

But Congressional insiders say the most likely scenario for passage is to move just the John Lewis bill through in the fall.

The Texans’ lobbying campaign has had both successes and setbacks. Around the Capitol, Democratic senators have been eager to meet with the Texans and are inclined to be seen with the Texas delegation.

But at least six of the Texas Democrats have been sidelined with COVID-19 diagnoses and are quarantining in their hotel rooms. There are still Zoom meetings and television appearances through their laptops.

These meetings, however, are with friendly audiences who mostly did not need convincing. On Thursday, the Texans were on track to meet with the staffs of two Republican lawmakers, U.S. Sens. Lisa Murkowski of Alaska and Pat Toomey of Pennsylvania, according to a Texas Democratic source who’s familiar with the daily schedules of the delegation.

The most consequential meetings they have had so far are with Manchin, the West Virginia Democrat who has been outspoken in his support of keeping the filibuster.

Over the summer, Texas Democrats sat down several times with Manchin and his staff members, and the Texans say they have walked away from those meetings encouraged with his interest in their cause, even if he remained noncommittal to the current federal bills up for consideration.

The latest meeting occurred last Thursday. But a day later, as the Texans were in Washington, D.C., in order to avoid arrest, Manchin traveled to Texas to raise money among mostly Republican donors. The move sparked online outrage among liberals.

“It’s not uncommon for U.S. senators to raise money in Texas,” she said. “It does not diminish our hope accomplishing anything here.”

U.S. Rep. Marc Veasey of Fort Worth has emerged as an ally to the Texas House Democrats on voting issues, as both a senior Democrat in the Texas congressional delegation and a former state representative who has been through these wars before.

He remains hopeful something will pass, but he also points out that there is a victory in the amount of attention the Texans have garnered for their cause.

He compared the Texas Democrats’ tactics with the civil rights protests in the 1950s and early 1960s to bring northerners’ attention to voter suppression tactics like poll taxes. In that work, he argued, activists did not see any immediate legal returns but the activism laid the groundwork for the 1965 Voting Rights Act.

“It goes back to we’re shining a light on it, and that’s important. … Something, thank God, finally happened, or I wouldn’t be here today,” he said.

This article was originally posted on Texas House Democrats trying to block the GOP voting bill are pinning their hopes on Congress. So far Congress is unmoved.