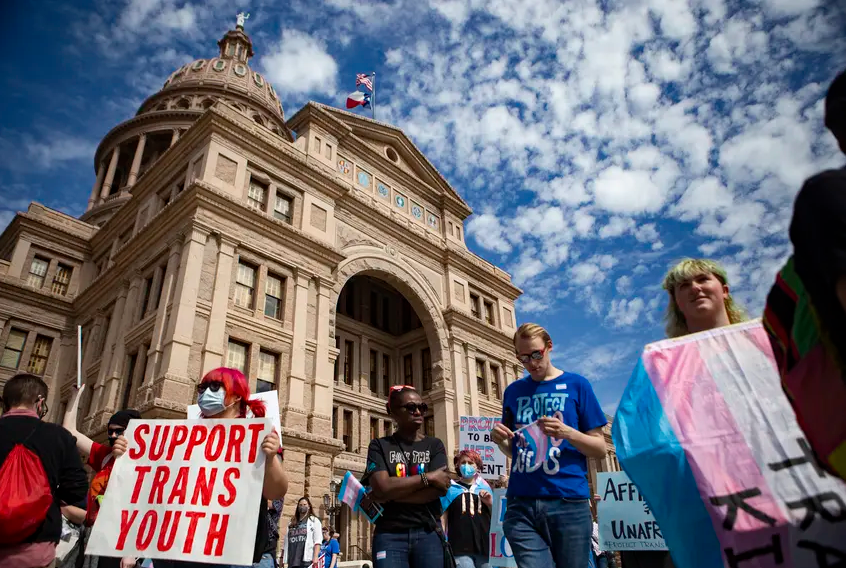 A state judge blocked Texas’ child protection agency from investigating the parents of a transgender teenager who received gender-affirming medical care, citing the “irreparable injury” they would likely suffer. District Judge Amy Clark Meachum’s ruling does not stop the agency from opening investigations into other families in similar situations. But she will consider issuing a statewide injunction blocking such investigations into all parents of trans children on March 11.

And U.S. Health and Human Services Secretary Xavier Becerra said his agency is looking into tools that would shield transgender Texans from the state’s attempts to hinder access to gender-affirming care.

“The Texas government’s attacks against transgender youth and those who love and care for them are discriminatory and unconscionable,” he said. “These actions are clearly dangerous to the health of transgender youth in Texas.”

Gov. Greg Abbott last month directed the Texas Department of Family and Protective Services to open investigations into parents that may have provided such care to their children. The American Civil Liberties Union and Lambda Legal brought a lawsuit challenging these investigations on behalf of a state employee, her husband and their 16-year-old who received gender-affirming treatment, plus Dr. Megan Mooney, a psychologist who works with trans teenagers.

“We appreciate the relief granted to our clients, but this should never have happened and is unfathomably cruel,” Brian Klosterboer, an attorney with ACLU of Texas, said in a statement Wednesday. “Families should not have to fear being separated because they are providing the best possible health care for their children.”

Becerra released guidance Wednesday that says refusing health care because of gender identity is illegal and that health care providers are not required to disclose information regarding gender-affirming care.

“This is government overreach at its worst,” Biden said in a statement. “Like so many anti-transgender attacks proliferating in states across the country, the Governor’s actions callously threaten to harm children and their families just to score political points. These actions are terrifying many families in Texas and beyond. And they must stop.”

The lawsuit and federal reaction follow a series of actions by state officials equating certain gender-affirming health care with child abuse. In late February, in response to a question from a state lawmaker, Attorney General Ken Paxton issued a legally nonbinding opinion claiming that the use of puberty-blocking medications and gender-affirming surgeries — the latter of which are rarely performed on children — could constitute child abuse under the Texas Family Code.

“Because the Texas Department of Family and Protective Services (DFPS) is responsible for protecting children from abuse, I hereby direct your agency to conduct a prompt and thorough investigation of any reported instances of these abusive procedures in the State of Texas,” Abbott wrote in a letter a few days later.

In a statement that same day, DFPS Commissioner Jaime Masters said the department would “follow Texas law” as laid out in the opinion from the attorney general.

The ACLU and Lambda Legal represent a DFPS employee who has been tasked with investigating these cases. The employee, who is anonymous in the lawsuit, has a transgender child.

When the employee asked her supervisor for clarification about how DFPS would implement this new directive, she was put on leave, the plaintiff said. Two days later, an investigator from Child Protective Services visited the family and interviewed the parents and child.

“The CPS investigator disclosed that the sole allegation against Jane Doe and John Doe is that they have a transgender daughter and that their daughter may have been provided with medically necessary gender-affirming health care,” the lawsuit said.

Lambda Legal lawyer Paul Castillo said he was aware of at least two other families, beyond the Does, who have been contacted by DFPS for investigations. And the chilling effect for parents of trans children has been immense, he said.

“Families aside from [those investigated] will cease care,” he said. “As a result of this order … medical providers have stopped care in terms of prescriptions to transgender kids because the threat of continuing to provide, the harm is so great.”

In Wednesday’s hearing, a lawyer for the state argued that the governor’s letter has been misconstrued to imply that all parents who provide gender-affirming care would be investigated by DFPS.

The opinion from the attorney general was intended to show “not that gender-affirming treatments are necessarily or per se abusive, but that these treatments, like virtually any other implement, could be used by somebody to harm a child,” Assistant Attorney General Ryan Kercher said.

Kercher argued that Abbott’s letter was merely clarifying a “concern” that gender-affirming treatments could never be considered child abuse.

Meachum challenged that argument, asking how common it is for the governor to issue directives like this to DFPS. Kercher said he did not know.

Meachum could have blocked these investigations statewide on Wednesday, but instead scheduled a hearing for March 11. Lawyers for the plaintiffs said her ruling left them optimistic about that upcoming hearing.

“The fight next week will be to put on evidence and witnesses to show the harm of this awful policy,” said Currey Cook, senior counsel with Lambda Legal. “Because we know that this isn’t just Dr. Mooney, it’s not just this one family that is in this impossible bind.”

“People have roots and jobs and school and connections,” he said. “They just want to feel welcome in the place they call home.”