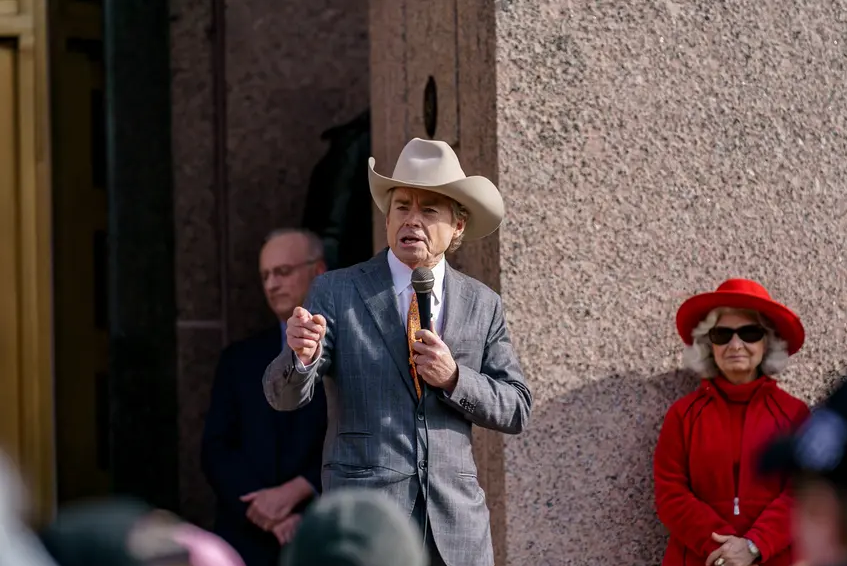 Gov. Greg Abbott has publicly ignored his most vocal primary challenger, Don Huffines, for months, and his campaign says it is not paying him any attention.

But the direction of state government lately has conspicuously aligned with Huffines’ demands.

Abbott’s decision Monday to prohibit private businesses from requiring COVID-19 vaccines for employees marked a stark reversal for the governor — and came after Huffines hounded him over it. Abbott justified the reversal as necessary pushback against the federal government, but Huffines declared victory — and it is far from the only issue where he contends he has pushed Abbott to the right.

Abbott’s announcement this spring that Texas would build its own border wall came after Huffines launched his campaign proposing that. Abbott’s move to get the state to declare gender-affirming health care for minors child abuse followed Huffines’ calls for him to crack down on it. And after Huffines criticized Abbott over a state department website providing resources for LGBTQ youth, the department took it down — a move that a Houston Chronicle report confirmed Monday was prompted by Huffines.

Whatever is motivating Abbott, it is driving Texas in the most conservative direction in recent memory — and Huffines is only looking to accelerate the trajectory.

Huffines, a wealthy business owner and former state senator from Dallas, said in an interview Tuesday that he believes his campaign has been “extremely influential” and “certainly the main reason — if not 100% of the reason — [Abbott’s] moved to the right, including all session last spring and the special sessions.”

“Abbott knew that I was coming after him all last session, so he knew he needed to shore up his right flank,” said Huffines, who spent months speaking out against the governor’s coronavirus response before announcing his primary challenge in May. “I think my campaign has had a dramatic impact on his policies.”

Abbott’s campaign dismisses Huffines and the notion that he holds sway over Abbott’s agenda.

“He certainly has an inflated opinion of his stature for a guy who lost reelection by 8 points,” said Abbott’s chief strategist, Dave Carney, referring to Huffines’ last state Senate race.

Carney suggested Huffines and his allies prodding Abbott from the right have “delusional ideas of grandeur.”

“The sun rose this morning, but I didn’t take credit for it, even though I wanted it to be morning,” Carney said. “This is crazy.”

On Abbott’s latest executive order regarding vaccine mandates, Carney said it was entirely a response to President Joe Biden’s announcement that large private employers will have to require their employees to be vaccinated. That announcement is confusing businesses, Carney said, and Abbott wanted to get ahead of the policy before it went into effect.

Huffines, who still has a steep climb against Abbott, has benefited from the lack of a serious Democratic challenger to the governor, leaving virtually all attention on the GOP primary. Still, Democrats have expressed alarm with his campaign — and most recently pointed out how one of his TV ads uses the same “invasion” rhetoric about the border that was behind the 2019 El Paso Walmart shooting.

“This is no surprise from today’s Texas GOP, because for months now, Texas Republicans have been in a race to the right in order to scoop up extremist primary voters,” Texas Democratic Party Chair Gilberto Hinojosa said in a statement after the ad was released. “Huffines, Abbott, and too many others are prioritizing their political careers at the expense of the safety of millions of Texans.”

Huffines is one of at least three primary challengers looking to deny Abbott a third term. Another is former Texas GOP Chair Allen West, who has been critical of Abbott but not as aggressive as Huffines in trying to drag the governor to the right. Conservative commentator Chad Prather is also challenging Abbott.

The governor remains the favorite in the primary based at least on polling and fundraising. A Quinnipiac University poll released late last month found that 80% of Republicans support Abbott’s reelection.

One of Abbott’s top donors on his latest filing was James Huffines, Don Huffines’ brother and an Austin banker who has previously said he is remaining an Abbott supporter despite his brother’s campaign.

Don Huffines does stand out in the primary field, however, for his ability to self-fund. He began his campaign with a $4.5 million bank loan that he guaranteed and another $500,000 he directly loaned to himself. And he could be in for more, considering the two latest reports did not require him to disclose such loans.

Huffines has already spent significantly, blanketing the state with billboards promising to end property taxes and “stop giving illegals our money.” He ran a TV ad during Saturday’s Texas-Oklahoma football game in which he vowed to “stop the illegal invasion” and showed a clip of Fox News host Tucker Carlson criticizing Abbott on border security.

Despite Huffines’ growing attacks, Abbott still possesses the most sought-after endorsement in Republican politics: that of former President Donald Trump.

But even then, Abbott’s intraparty critics have been working to raise doubts about the sincerity of the June endorsement — and Trump has not dissuaded them as he has repeatedly pushed for Abbott to add an election audit bill to the current special session call. That is a proposal that Huffines has also been pressuring Abbott to prioritize.

Huffines said Trump’s Abbott endorsement has not been a deterrent to his campaign “as much as we anticipated it would be.” The former president, Huffines added, “obviously jumped the gun on this.”

“It’s unfortunate, but what we’ve learned over the years is his endorsement is great when it’s a Trump candidate,” Pierson said. “We’ve also learned not even President Trump can pull a non-Trump supporter across the finish line.”

Race to the right

Perhaps no issue illustrates the Abbott-Huffines race to the right more than border security. Abbott has taken a litany of steps — some unprecedented — to crack down on illegal immigration under Biden, including the construction of the state border wall, seeking to arrest on state charges migrants who have crossed the border illegally and pressing the Biden administration to declare a federal emergency there.

But it is not enough for Huffines, who likes to say he will not “ask permission” from the federal government to fortify the border. He has outflanked Abbott in at least two ways, vowing to deploy the entire Texas National Guard to the border and to shut down all commercial inbound traffic with Mexico until that country secures its side of the border.

Asked about the potentially devastating impact that could have on the Texas economy, Huffines compared the strategy to treating cancer.

“Chemotherapy’s not much fun, but it can still work,” Huffines said.

Border security is not the only issue where Abbott is swinging to the right more than he ever has before — and still Huffines is not content. After Abbott signed Texas’ new near-total ban on abortion into law last month and defended its lack of a rape exception by saying survivors still had a short window to get an abortion, Huffines denounced Abbott for ​​”advocating for women to get abortions in the first six weeks of pregnancy.”

Emboldened by the Houston Chronicle story, Huffines called on Abbott on Wednesday to fire the state employee who reportedly approved the webpage with LGBTQ youth resources.

Abbott’s supporters say his intense focus on many of the issues that Huffines is trumpeting, such as the border, is driven by the Biden administration rather than concerns about his primary.

“I think Gov. Abbott has a very keen political antennae and is staying aggressive and energetic in his job, both as a governor and as a candidate,” said Ray Sullivan, who was chief of staff to Abbott’s predecessor, Rick Perry, who also clashed nonstop with a Democratic White House. “I would say, however, that I view much of the governor’s high-profile activity, particularly this latest one on vaccines, as a reaction to a grossly overreaching federal government much more than state politics.”

As much as Huffines has gotten growing attention for his campaign, one obstacle could be West, who started the race with higher name recognition and seems to be taking a different route in the primary. While Huffines has played the role of anti-Abbott attack dog, West has been more restrained, speaking critically of the governor but less frequently and with less bombast.

Their differing approaches were on full display in July at the Conservative Political Action Conference in Dallas. Huffines delivered a blistering takedown of Abbott; West hardly mentioned he was running for governor.

Asked how he differs from West, Huffines cited his experience in the Legislature, saying it gives him a “running start.” Shortly after the interview, though, Huffines offered a more pointed contrast with West, issuing a statement in which he reiterated he is “100% pro-life without exception.” The statement did not mention West, but it came hours after the publication of an interview in which West said he supports an abortion ban exception for rape survivors until cardiac activity is detected in an embryo.

Huffines has been able to corral the overwhelming majority of the anti-Abbott endorsements in the primary. He has been backed by the vocal Abbott critics like former state Rep. Jonathan Stickland of Bedford; a long list of activists; a few figures from the Trump orbit like Pierson; and U.S. Sen. Rand Paul of Kentucky and his libertarian icon father, Ron Paul, whose endorsement landed Thursday.

Meanwhile, Abbott is continuing to keep a steady political schedule, and while he is not mentioning his primary competitors, he is urging Republicans to stick together next year.

“​​In order to do this, we must stand united as a party,” Abbott said Monday in East Texas. “If we are divided, Texas will fall—and if Texas falls, America falls.”