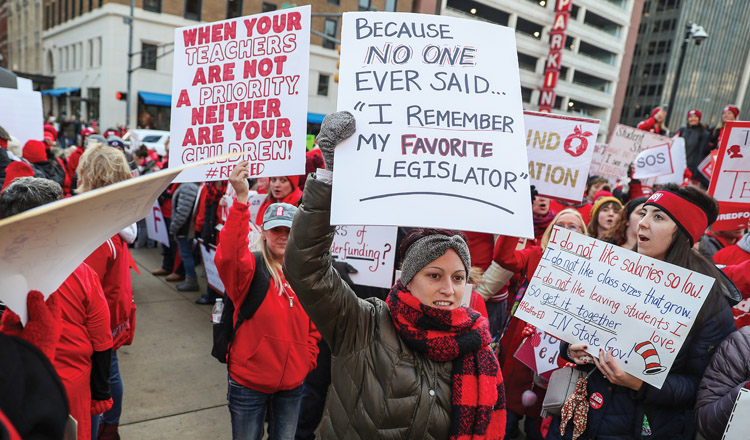 A new law that goes into effect July 1 in Indiana will make it much easier for teachers to opt out of membership in the union and to stop having dues deducted from their paychecks.

Supporters say it’s a victory for the First Amendment rights of teachers, who are sometimes not aware they have a right to choose whether or not to be in a union and often cannot easily leave the union once they’ve joined.

“Teachers are not usually told up front how much those dues will be and oftentimes, deductions are taken without their knowledge or permission,” Sharon Row, of Indiana Professional Educators, Inc., an association of non-union teachers, said on the organization’s website in announcing the bill being signed into law earlier this year.

The law, which passed through the Indiana General Assembly as Senate Bill 251, brings the state into compliance with the 2018 Supreme Court decision in Janus v. AFSCME, said Vincent Vernuccio, a senior fellow with the Mackinac Center for Public Policy.

In Janus, the court said public employees have a First Amendment right to join a union, or not join a union, and whether to pay all dues. A previous court decision had said they could choose not to join a union, but would still have to pay some dues, those that are not used to lobby elected officials on political issues.

SB 251 also says school corporations must see employees have signed to join the union or not join it, instead of accepting the union’s word for it.

“What Senate Bill 251 did is made sure that before that money is taken out and given to the union that those school employees were first informed that they have a First Amendment right to choose to pay those fees or not,” says Vernuccio, “and would make sure that they’re the ones actually requesting that deduction, so the authorization for the deduction has to come directly from the school employee.”

In California, union representatives were caught forging signatures of teachers, out of whose paychecks the school districts then deducted dues, and handed them over to the union.

SB 251 would make sure it doesn’t happen in Indiana.

A teacher who signs agreeing to be a member of the union gets membership in all three. Dues are typically $800-$1,000 a year, depending on the school corporation, and are deducted from employee paychecks every two weeks.

SB 251, which was authored by Sen. Phil Boots, R- Crawfordsville, says: “A school employee has the right to resign from, and end any financial obligation to, a school employee organization at any time.”

It specifies teachers must be allowed out of the union on the first day of the pay period that follows their notification to the school corporation.

It also says the form a new teacher signs, authorizing union dues to be deducted, shall be “prescribed by the attorney general” and shall include, in 14-point bold font, the words: “I am aware that I have a First Amendment right, as recognized by the United States Supreme Court, to refrain from joining and paying dues to a union (school employee organization). I further realize that membership and payment of dues are voluntary and that I may not be discriminated against for any refusal to join or financially support a union. I authorize my employer to deduct union dues from my salary in the amounts specified in accordance with my union’s bylaws. I understand that I may revoke this authorization at any time.”

Another change made in the law is every teacher must be given this form to sign every year, so that they are giving informed consent every year to have union dues deducted.

“That’s why bills like SB 251 are so important, because it’s safeguarding those public employee paychecks and it’s making sure that, you know, they’re free to pay union dues if they want to but that they actually authorized that deduction from their paycheck after being informed of their rights,” says Vernuccio. “It’s simply good bookkeeping and good policy.”

A representative of the Indiana State Teachers Association, John O’Neal, testified in opposition to the bill in January, saying it “singles out public school teachers….for a new and highly bureaucratic process…”