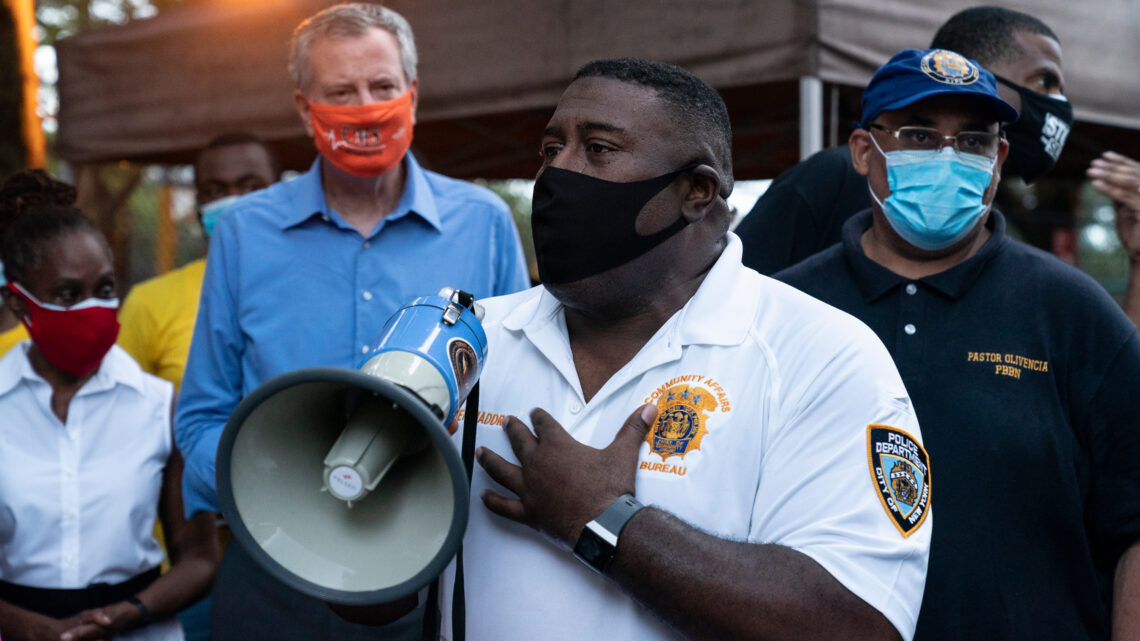 The NYPD’s Internal Affairs Bureau is investigating the quick release of a retired cop who was arrested for allegedly menacing three young boys with a gun in Brooklyn, according to family members of the children.

Lashawn Jordan, the aunt of a 12- and 14-year-old who contend ex-officer Kruythoff Forrester chased them with a gun after their basketball hit the Brownsville storefront camera where he works, said two internal affairs detectives showed up unannounced at the family’s home on Wednesday.

As THE CITY reported Tuesday, Forrester had been detained at the 73rd Precinct in Brownsville for just a few hours on the eve of Thanksgiving when NYPD Community Affairs Bureau Chief Jeffrey Maddrey ordered the ex-cop’s arrest to be voided, according to sources.

The chief and Forrester had both worked in the 73rd Precinct, and apparently overlapped when Maddrey was the commanding officer of the East New York Avenue station house over a decade ago, online records show.

Police officials haven’t responded to questions about Maddrey’s role in Forrester’s release. But they said earlier this week that nixing the arrest was justified based on an investigation that included area video footage showing Forrester without a weapon in his hand.

They’ve declined to share that footage with THE CITY, despite repeated requests.

Police also said Forrester, who is licensed to have a pistol, denied drawing or pointing his gun at the boys.

‘The Police are Against Us’

Jordan said the family filed a complaint with internal affairs on Tuesday after questioning the Police Department’s handling of the incident — events she said “terrified” her nephews and their 13-year-old friend.

She said she didn’t hear from IAB until the two plainclothes investigators showed up to interview her nephews late Wednesday.

The mother of the two boys said she declined, through family members, to let the children be interviewed because she wasn’t at the home at the time. She also asked her sister if the detectives had shown their badges.

“Because you got to understand right now, in the position we are in, the police are against us,” said the children’s mother. “I was feeling shady towards them, not knowing who they truly were.“

A reporter for THE CITY saw the same detectives earlier that day canvassing neighborhood houses and businesses for security camera footage.

The NYPD press office didn’t respond to multiple questions about the incident, including one about the IAB’s probe.

The Civilian Complaint Review Board, which investigates police misconduct that includes abuse of authority, is also looking into the incident.

Meanwhile, a spokesperson for Brooklyn District Attorney Eric Gonzalez said the DA’s office was keeping tabs on the police investigation, but hasn’t launched a probe of its own.

‘Fight to Get Justice’

The three boys said they were walking past a storefront real estate office on Saratoga Avenue after playing basketball — something they did nearly every day at Hilltop Park — when their ball hit the security camera mounted in front of a shuttered beauty salon next door.

They turned the corner onto Pacific Street and continued walking and play-fighting on the way to the corner deli when, about halfway down the block, Forrester called out “Yo!” while brandishing a gun, according to the 14-year-old.

The trio started running back toward the direction of the real estate storefront and believe they heard one shot fired at that point.

Video footage from around that time obtained by THE CITY shows one of the boys screaming, “Run! Run, he has a gun!”

At the corner, the group split up, but Forrester continued to chase the 12- and 14-year-old brothers for an additional block-and-a-half, the youths said.

When the two boys rounded another corner, the 12-year-old says he ducked into a stairway leading to the basement entrance of a townhouse.

The 14-year-old said Forrester continued chasing after him, so he ran around another corner and called 911.

The boys and their families were interviewed by responding officers and said they were told Forrester would be arrested.

They learned the next day that he had been released within hours of his detention at the 73rd Precinct.

“I really think it might get swept under the rug,” Jordan said of the boys’ frightening clash with the retired cop. “But we are gonna fight to get justice for these boys.”