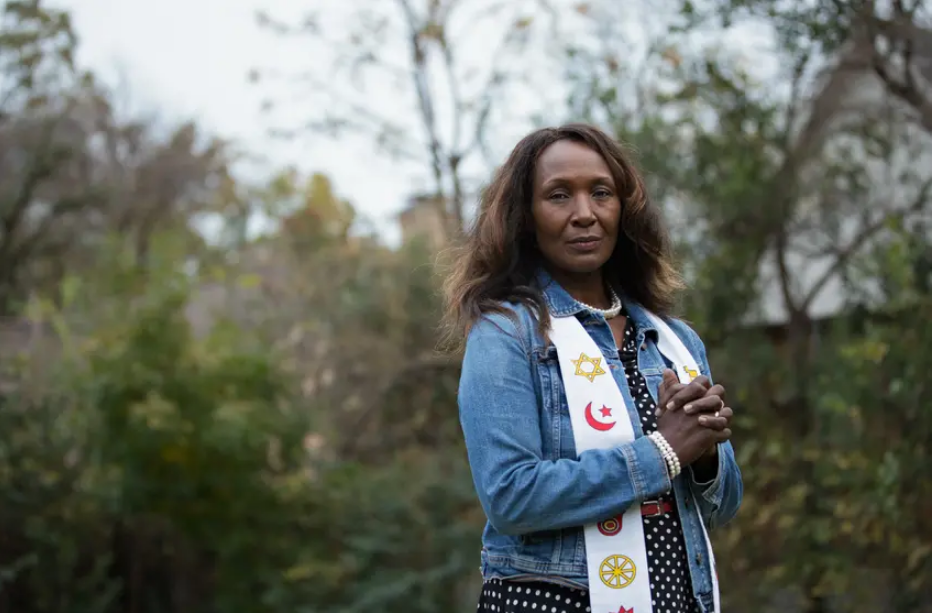 Rev. Erika Forbes’ pastoral calling regularly brings her to the Whole Woman’s Health abortion clinic in Fort Worth. She blesses the clinic and escorts patients inside — sometimes past a crowd of protesters.

The number of women going into the clinic has fallen since Texas’ Senate Bill 8 took effect Sept. 1, prohibiting abortion if cardiac activity is present, except in medical emergencies. But the few Texans still eligible for abortion need spiritual support, Forbes said, and so do the many who are not. That’s why she regularly partners with Whole Woman’s Health to organize clergy to support their work.

“I took a sacred vow to help people live a life free of shame, stigma and judgment,” said Forbes, an ordained interfaith minister in Dallas and manager of faith and outreach for social justice advocacy organization Just Texas. Too often, she said, religion has made women feel exactly that when it comes to abortion. Seeking pastoral care may not even cross their minds.

She and other progressive pastors in Texas and nationwide are trying to change that. For four decades, the religious right has based its opposition to abortion in “the sanctity of life,” but these faith leaders say the physical, spiritual and emotional well-being of mothers is equally sacred.

While some may be surprised to find faith leaders advocating for abortion rights and offering to assist women seeking abortions, Forbes and others pointed out this is nothing new. In 1967, a United Methodist minister started the Clergy Consultation Service on Abortion, and over 1,000 pastors, priests and rabbis formed an interstate network to help women access abortion in the pre-Roe v. Wade era. Just Texas is part of that spiritual tradition of advocating for women’s rights, Forbes said.

“Clergy have been preparing and have prepared to offer pastoral care for women since before SB 8 went into effect,” Forbes said. “While it was jarring, and it has created a sense of hostility and fear, it doesn’t change what progressive people of faith have been doing.”

Sometimes Forbes’ work is counseling those who have been shamed by their families or communities and sometimes she helps coordinate transportation to states with less restrictive laws. For her and other progressive pastors, it has also meant speaking publicly, letting people know they’re there.

Rabbi Mara Nathan leads Temple Beth-El in San Antonio. During the High Holy Days in September, she gave a sermon on the Jewish value of choice. Reform Judaism teaches life begins at birth, she said, and also “treasures women’s autonomy.”

She’s concerned that narrow religious interests — namely conservative Christian interests — are reflected in the new law, to the exclusion of the teachings of other faiths, like hers. Nathan wanted her congregation to be clear that she supported their reproductive rights and that their faith did as well.

“I’ve always felt very pro-choice, but also I feel very confident that there are a lot of teachings that go back hundreds of years that prioritize the well-being of the woman,” Nathan said.

Rev. Amy Meyer is the head pastor of First Presbyterian Church (PCUSA) in Elgin, about 35 miles northeast of Austin. In October, as the effects of the state’s new abortion law were becoming clear, Meyer also felt compelled to address the issue with her church in a sermon and podcast, inviting her congregation to be intellectually honest about what the Bible does and does not say.

“I don’t think that God is quiet on the issue,” Meyer said, “But I do think the Bible doesn’t spell things out for us in terms that are helpful on today’s issues.”

In her sermon, she read from Dartmouth College professor Randall Balmer’s 2014 Politico article, in which he refuted the common assumption that midcentury Christians were of one mind on abortion, leading to the rise of the Moral Majority after Roe v. Wade. In fact, Balmer wrote, in the earliest days after the 1973 Supreme Court decision, churches were mostly quiet on the matter, and prominent evangelical W. A. Criswell, pastor of Dallas’ First Baptist Church, praised the decision, saying, “I have always felt that it was only after a child was born and had a life separate from its mother that it became an individual person, and it has always, therefore, seemed to me that what is best for the mother and for the future should be allowed.”

Evangelical opposition to abortion became more rigid as conservative political strategists, authors and pastors tied it to Christian family values and sexual morality in the 1980s and 1990s. Statewide coalitions and advocacy organizations supportive of the new Texas abortion law — like the Coalition for Life and Texas Alliance for Life — have predominantly evangelical Christians and Catholics on their boards of directors.

Historically, however, within Christianity and Judaism, Meyer said, the conversation has always been nuanced. Religious teachers have debated the issue for centuries — taking into account different beliefs on the beginning of human life and reconciling this with the need to consider the health and welfare of a mother.

Some theologically conservative faith leaders are trying to balance the two concerns — life in the womb and support for the person carrying it. Many Catholics oppose abortion as part of a “consistent life ethic” that includes more progressive social concerns like support for welfare, opposition to capital punishment and, for some, pacificism.

Sister Norma Pimentel’s Catholic faith tells her to focus less on debating when life begins — “God already knew us before we were conceived. It’s not a matter of what point we become a human life,” she said — and more on God’s intentions for life. She is aligned with her church’s anti-abortion position but she says supporting women is also needed.

As executive director of Catholic Charities of the Rio Grande Valley, Pimentel tries to alleviate the “stressors” that lead people to seek abortion.

“As a society, we need to help mothers,” Pimentel said. “We fail them when they see abortion as the only option.”

Such an earnest effort is not reflected in SB 8, said Rev. Natalie Webb, senior pastor of University Baptist Church in Austin. “People will say that it is about ethics, but it is absolutely not about ethics. All of that legislation is about suppressing women.”

If efforts to restrict abortion were rooted in Biblical ethics, Webb said, they would include subsidized child care, social safety nets and accountability for the men involved. “We’re not talking about any of those things,” she said.

Her congregation is one of the Reproductive Freedom Congregations trained by Just Texas, because she wants more churches to be a go-to for spiritual and practical support when people are deciding whether or not to stay pregnant. “It’s an indictment of the church that we’ve let women think they have to do this alone.”

In her 28 years of ministry, Pastor Cheryl Kimble has counseled several women through dangerous and nonviable pregnancies, including some that ended in termination. As pastor of The Church @ Highland Park in Austin, she always supported families whatever their decision, but now “by the time they come to me there is no option,” she said, “My hands are tied.”

Whatever shame, grief and guilt a person experiences after an abortion, Kimble said, “when the government tells you that it should be illegal, that guilt will be increased.”

Counsel for those heavy emotions, she said, is a pastoral domain, and the law is making it more difficult.

On the front lines

Forbes knows many women do not feel they can seek out a pastor or priest for support. While Just Texas is trying to change that, she said, she’s also adamant that some of the pastoral care be directed toward the doctors, nurses and others working inside abortion clinics — those on the “front lines” who will then deliver mental and emotional care to their patients.

It was the women at the abortion clinic who helped her most when she needed an abortion, said Forbes, who had two abortions in her teens. Her grandfather was a minister — and as much as she loved her grandparents, she knew they would not have supported her decision. It was the women in the clinic who made her feel understood, safe from judgment and hopeful. They ministered to her in a way she wants to minister to others.

“My abortion directly influenced not only my personal life, but also the calling I had as clergy,” Forbes said. Because she felt that relief firsthand — the most common emotion women report feeling after an abortion — she knows shame and guilt don’t have to define the emotional experience.

“What they are ashamed of is that other people judge their choices,” Forbes said. “The most freeing thing I can say to them is that the God of their understanding, not their religion, loves and accepts them as they are and wants them to thrive.”