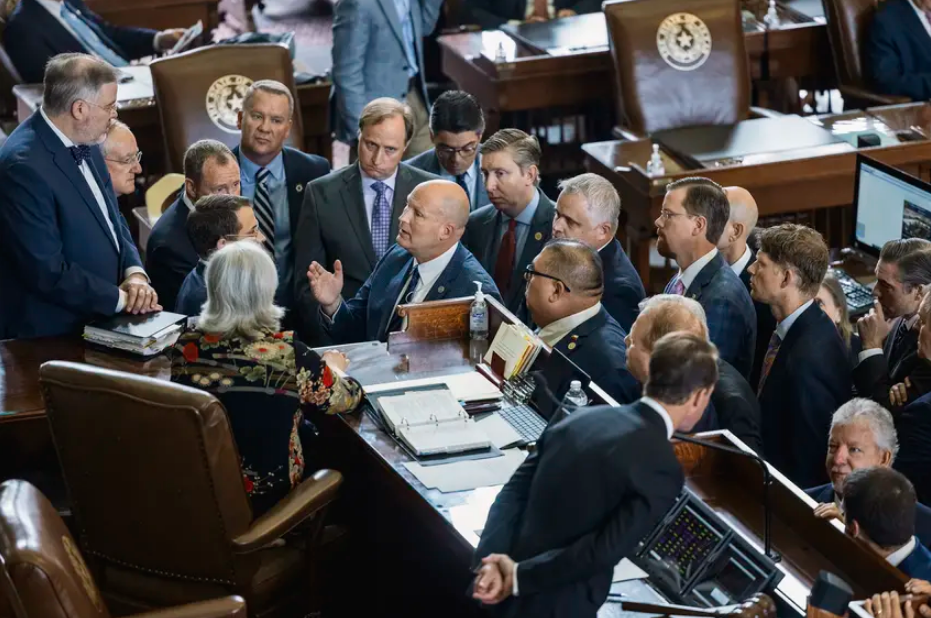 A showdown in the Texas House was locked into place Tuesday after the chamber voted overwhelmingly to send law enforcement after Democrats who left the state a day earlier in protest of a GOP priority elections legislation.

More than 50 House Democrats left Monday for Washington, D.C., to deny the chamber a quorum — the minimum number of lawmakers needed to conduct business — as it takes up voting restrictions and other Republican priorities in a special session.

That agenda, set by Gov. Greg Abbott, includes House Bill 3 and Senate Bill 1, the election legislation at hand that would make a number of changes to Texas’ voting system, such as banning drive-thru and 24 hour voting options and further restricting the state’s voting-by-mail rules. Over the weekend, both House and Senate committees advanced the election bills.

The impact of the House move is unclear since Texas law enforcement lacks jurisdiction in the nation’s capital. At a news conference Tuesday afternoon though, Rep. Jim Murphy, a Houston Republican who chairs the House GOP Caucus, acknowledged that state authorities can’t force Democrats to return.

“We want them to come back — that’s our message,” Murphy said.

Meeting shortly after 10 a.m., the House quickly established that it lacked the two-thirds quorum required to do business, with only 80 of 150 members participating in a test vote.

Then Rep. Will Metcalf, R-Conroe, chair of the House Administration Committee, moved to issue what is known as a “call of the House” to try to regain quorum. That motion passed 76-4. Metcalf offered another motion, asking that “the sergeant at arms, or officers appointed by him, send for all absentees … under warrant of arrest if necessary,” effectively making the missing Democrats legislative fugitives. That motion also passed 76-4.

Morales told the Tribune later Tuesday that he stayed in Austin because he thinks his “constituency expects me to stay behind.”

“I believe that my efforts would be best if I stuck around here and fought the fight here,” he said, adding that he supported his Democratic colleagues who had left the state.

Under a call of the House, according to chamber rules, all entrances or doors leading out of the hall are locked, and members are not permitted to leave without permission in writing from the speaker.

Morales said members had been told informally that House Speaker Dade Phelan, R-Beaumont, planned to excuse lawmakers daily in the afternoons as long as the chamber is under a call of the House.

Around 2:30 p.m., Phelan told members that the chamber would stand at ease until 11 a.m. Wednesday and released them for the day as he handed out permission slips for them to exit the chamber.

After Metcalf’s motions passed, Rep. Tony Tinderholt, R-Arlington, sought to move to strip absent Democrats of their committee leadership posts if they do not return by noon Wednesday. The motion did not immediately get a vote, and in a subsequent exchange with Rep. Morgan Meyer, R-Dallas, Phelan said committee chairs and vice chairs cannot be removed from their positions under the current chamber rules.

Earlier Tuesday, Abbott said in a radio interview that any Democrats who fled the state should lose their committee leadership posts.

“Of course any Democrat who is a member of any leadership, such as a chairman of a committee — they should be losing their job,” Abbott told Lubbock radio host Chad Hasty.

Meanwhile, House Democrats held a news conference Tuesday morning in D.C. reiterating their intention to stay outside of the state through the end of the special session.

Rep. Chris Turner, who chairs the House Democratic Caucus, said any negotiations about Democrats returning to Austin would have to start with Abbott reversing his veto of funding for the legislative branch.

Democrats are challenging the governor in court over that veto, which Abbott issued after two of his priority bills — including the election legislation — died after House Democrats walked out of the chamber in the final hours of the regular session. Funding for the Legislature, staffers and legislative agencies is set to run out Aug. 31.

By early Tuesday afternoon, members on the House floor were grouped around desks or visiting with Phelan near the front of the chamber.

Asked whether there was tension among members, Morales said he did not sense any.

“It could be the relationships that I have built across the aisle, but I didn’t sense that tension,” he said. “Everyone is coming up to me and thanking me, even though they know I’m against [HB 3].”

Teaching the public more science likely won’t boost support for funding, but sparking their curiosity might